Ocala Post
Ocala Newspaper - News without hiding the truth
Home News US News Soldiers Conspire To Assassinate DEA Agent
Michele M. Leonhart, the Administrator of the United States Drug Enforcement Administration (“DEA”) and Preet Bharara, the United States Attorney for the Southern District of New York, today announced the arrests of three defendants – Joseph Manuel Hunter (AKA: Rambo) and Timothy Vamvakias, both citizens of the United States, and Dennis Gogel, a citizen of Germany. Hunter is expected to arrive in the Southern District of New York this evening and will be presented before a U.S. Magistrate Judge in Manhattan federal court tomorrow.

Vamvakias and Gogel arrived in the Southern District of New York yesterday and were presented in U.S. Magistrate Court yesterday afternoon. As part of the same case, Slawomir Soborski and Michael Filter, citizens of Poland and Germany, respectively, were arrested in Estonia at the request of the United States on September 25, 2013.

DEA Administrator Michele M. Leonhart said: “The targets of this investigation were hardened global criminals involved in everything from drug and arms trafficking to contract assassinations. Besides being international cocaine traffickers, members of this criminal organization conspired in an elaborate scheme to murder a DEA Special Agent and an informant for a six figure payday. Their intent was to commit the most serious and ruthless crime that can be directed against any law enforcement officer, and one that has our highest investigative priority. I wish to thank our foreign law enforcement partners for their outstanding efforts and partnership in completely dismantling this sophisticated and dangerous international criminal enterprise.”

Manhattan U.S. Attorney Preet Bharara said: “The bone-chilling allegations in today’s Indictment read like they were ripped from the pages of a Tom Clancy novel. The charges tell a tale of an international band of mercenary marksmen who enlisted their elite military training to serve as hired guns for evil ends. Three of the defendants were ready, willing and eager to take cold hard cash to commit the cold-blooded murders of a DEA agent and an informant. Thanks to the determined, skillful and intrepid efforts of the DEA’s Special Operations Division, an international hit team has been neutralized by agents working on four continents.”

According to the Indictment against Hunter, Vamvakias, Gogel, Soborski, and Filter unsealed today:

Since leaving the U.S. Army in 2004, Hunter has acted as a “contract killer” and successfully arranged for the murder of a number of people.

During meetings in Asia, Africa, and the Caribbean, beginning in January 2013 and continuing through late September 2013, Hunter communicated with two confidential sources (the “CSs”) working with the DEA, who purported to be Colombian narcotics traffickers. Hunter agreed to serve as the head of security for the CSs’ purported narcotics trafficking organization, and assembled a “security team” consisting of Vamvakias, Gogel, Filter, and Soborski. Hunter also told the CSs that he had previously been involved in contract killings – referred to as “bonus jobs” – and that some team members wanted to do as much “bonus work” as possible.

Hunter and his co-defendants thereafter agreed, in meetings and communications with the CSs, to provide security and surveillance services to the narcotics trafficking organization. Furthermore, Hunter, Vanvakias, and Gogel agreed to commit murder-for-hire in Liberia by assassinating both a Special Agent of the DEA and a person who purportedly was providing information to the DEA about the CSs’ narcotics trafficking organization. In exchange for the murders, Hunter, Vamvakias, and Gogel were together to be paid approximately $700,000, and Hunter was to receive an additional $100,000 for his leadership role. Communications between the defendants and the CSs occurred by telephone, over e-mail, and in a series of surreptitiously audio-recorded and videotaped meetings over an approximately nine-month period.

Hunter and his four co-defendants provided a variety of services to the CSs’ purported narcotics organization. In late March 2013, in Thailand, at Hunter’s direction, Gogel, Filter, and Soborski surveilled a vessel on behalf of the CSs’ purported narcotics trafficking organization. In April 2013, in Mauritius, at the direction of the CSs, Gogel, Filter, and Soborski provided security for a meeting at which the participants discussed the distribution of illegal narcotics to the United States. In late June 2013, in the Bahamas, Vamvakias, Gogel, Filter, and Soborski conducted surveillance of a purported U.S.-registered aircraft at the direction of a third CS (“CS-3”) working with the DEA, who posed as a member of the CSs’ narcotics trafficking organization. CS-3 informed the defendants that the aircraft was to be loaded with 300 kilograms of cocaine to be shipped to New York.

With respect to the murder-for-hire scheme, in mid-May 2013, at a meeting with the three CSs in Thailand, Hunter, Vamvakias, Gogel, and Soborski were told that a “bonus job” – that is, a contract killing – was in the offing, due to a leak within the CSs’ narcotics trafficking organization. In late May 2013, in e-mail communications, Hunter confirmed that his team would be willing to murder both a U.S. law enforcement agent and a source (a boat captain) that was providing information to U.S. law enforcement authorities. Hunter confirmed by e-mail that his team would kill both the DEA agent and the informant who was providing information to law enforcement about the CSs’ narcotics trafficking organization. At a meeting in late June 2013, in the Bahamas, CS-3 explained to Vamvakias and Gogel that “the job is to kill a U.S. DEA agent and a source with the DEA,” who would be located in Liberia. Vamvakias and Gogel discussed the weapons that could be used and masks to be worn for the murders, and Vamvakias stated that it would be better to “hit the agent first” and then “the snitch.” In early July 2013, Hunter sent via e-mail a list of the items needed for the murders, including “Two Submachine Guns with silencers and two .22 caliber pistols with Silencers.”

In mid-August 2013, at a meeting in Thailand, Hunter told CS-3 that Vamvakias and Gogel would commit the murders. Hunter, Vamvakias, and Gogel discussed in detail the weapons that would be used and the possibility of entering Liberia without having their passports stamped. They suggested that CS-3 fly them out of the country via private plane following the murders. Vamvakias stated that among other weapons, a sub-machine gun and two .22 caliber pistols would be needed for the murders, and CS-3 agreed to deliver the weapons to Liberia. The next day, at a meeting with Gogel, CS-3 confirmed that an order for the requested weapons had been made. Later that same day, Gogel met again with CS-3 and provided CS-3 with two highly sophisticated latex facemasks, which can make the wearer appear to be of another race, for CS-3 to transport to Liberia.

In late September 2013, Gogel and Vamvakias arrived in Liberia to commit the planned murders-for-hire.

This prosecution is being handled by the Office’s Terrorism and International Narcotics Unit. Assistant United States Attorneys Michael Lockard, Aimee Hector and Anna Skotko are in charge of the prosecution. 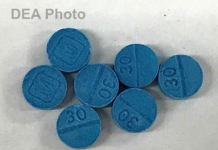