Public schools will open shelters at noon on Wednesday, September 28.

You should bring enough supplies to last at least 48 hours. 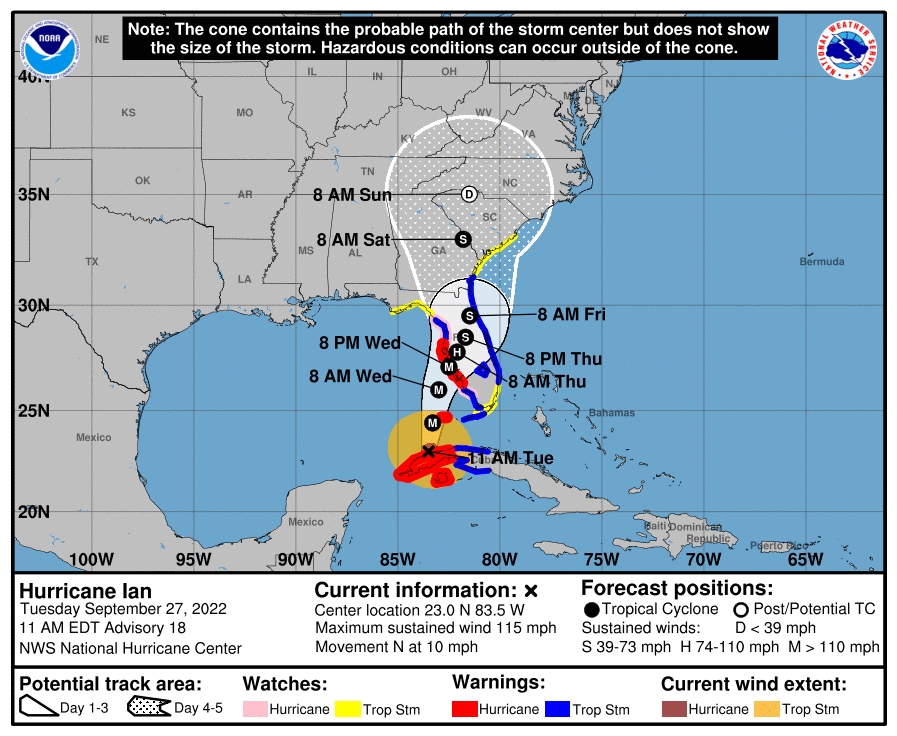 CHANGES TO WATCHES AND WARNINGS:

Major Hurricane Ian, located near 23.0 north, 83.5 west at 11 AM EDT
this morning will continue to move northward today, and then is
forecast to track north-northeastward tonight and Wednesday.

On this track, Ian is forecast to traverse the southeastern Gulf of
Mexico tonight and Wednesday and approach the west coast of Florida
by Wednesday evening. Maximum winds are currently near 115 mph
with higher gusts.

The start of tropical storm winds may begin as early as Wednesday
night across north central Florida, by Thursday morning across
northeast Florida and coastal southeast Georgia, and Thursday
evening across portions of inland southeast Georgia.

Increasing rain chances are expected late tonight and Wednesday from
south to north, with more rain and rain squalls and possibly
embedded thunderstorms occurring Wednesday night through Friday.
Heavy rainfall and possible flooding are to be expected, and a Flood
Watch has been issued for north central and portions of northeast
Florida.

There is a concern for isolated tornadoes across parts of northeast
and north central Florida from Wednesday evening through at least
Thursday evening.

* FLOODING RAIN:
Protect against life-threatening rainfall flooding having possible
extensive impacts across northeast Florida, north central Florida, and
southeast Georgia. Potential impacts include:
– Major rainfall flooding may prompt many evacuations and rescues.
– Rivers and tributaries may rapidly overflow their banks in
multiple places. Small streams, creeks, canals, and ditches may
become dangerous rivers. Flood control systems and barriers may
become stressed.
– Flood waters can enter many structures within multiple
communities, some structures becoming uninhabitable or washed
away. Many places where flood waters may cover escape routes.
Streets and parking lots become rivers of moving water with
underpasses submerged. Driving conditions become dangerous.
Many road and bridge closures with some weakened or washed out.

* WIND:
Protect against life-threatening wind having possible extensive impacts
across portions of northeast Florida, north central Florida, and
southeast Georgia. Potential impacts in this area include:
– Considerable roof damage to sturdy buildings, with some having
window, door, and garage door failures leading to structural
damage. Mobile homes were severely damaged, with some destroyed.
Damage accentuated by airborne projectiles. Locations may be
uninhabitable for weeks.
– Many large trees snapped or uprooted along with fences and
roadway signs blown over.
– Some roads are impassable from large debris, and more within urban
or heavily wooded places. Several bridges, causeways, and
access routes are impassable.
– Large areas with power and communications outages.

* TORNADOES:
Protect against a tornado event having possible limited impacts
across Northeast Florida and Southeast Georgia. Potential impacts
include:
– The occurrence of isolated tornadoes can hinder the execution
of emergency plans during tropical events.
– A few places may experience tornado damage, along with power
and communications disruptions.
– Locations could realize roofs peeled off buildings, chimneys
toppled, mobile homes pushed off foundations or overturned,
large tree tops and branches snapped off, shallow-rooted trees
knocked over, moving vehicles blown off roads, and small boats
pulled from moorings.

* EVACUATIONS:
Listen to local officials for recommended preparedness actions,
including possible evacuation. If ordered to evacuate, do so
immediately.

WATCH/WARNING PHASE – For those not under evacuation orders, assess
the risk of wind, falling trees, and flooding at your location. If
you decide to move, relocate to a safer location nearby. If you do
not relocate, help keep roadways open for those under evacuation
orders.

WATCH/WARNING PHASE – If evacuating, leave with a destination in mind
and allow extra time to get there. Take your emergency supplies kit.
Gas up your vehicle ahead of time.

WATCH/WARNING PHASE – Let others know where you are going prior to
departure. Secure loose items and pets in the car, and avoid
distracted driving.

IMMINENT/ONGOING PHASE – Do not enter evacuated areas until officials
have given the all-clear to return.

RECOVERY PHASE – Do not enter evacuated areas until officials have
given the all-clear to return.

* OTHER PREPAREDNESS INFORMATION:
Now is the time to complete all preparations to protect life and
property in accordance with your emergency plan. Ensure you are in a
safe location before the onset of strong winds or possible flooding.

If you are relocating to a safe shelter, leave as early as possible.
Allow extra time to reach your destination. Many roads and bridges
will be closed once strong winds arrive. Check the latest weather
forecast before departing and drive with caution.

If heading to a community shelter, become familiar with the shelter
rules before arrival, especially if you have special needs or have
pets. Take essential items with you from your Emergency Supplies Kit.

Failure to adequately shelter may result in serious injury or loss of
life. Always heed the advice of local officials and comply with any
orders that are issued. Remember, during the storm 9 1 1 Emergency
Services may not be able to immediately respond if conditions are
unsafe. This should be a big factor in your decision-making.

Keep cell phones well charged. Cell phone chargers for automobiles
can be helpful, but be aware of your risk for deadly carbon monoxide
poisoning if your car is left idling in a garage or other poorly
ventilated area.

It is important to remain calm, informed, and focused during an
emergency. Be patient and helpful with those you encounter.

If you are a visitor, be sure to know the name of the city or town in
which you are staying and the name of the county or parish in which
it resides. Listen for these locations in local news updates. Pay
attention to instructions from local authorities.

Storm surge is the leading killer associated with tropical storms and
hurricanes! Make sure you are in a safe area away from the surge
zone. Even if you are not in a surge-prone area, you could find
yourself cut off by flood waters during and after the storm. Heed
evacuation orders issued by the local authorities.

Rapidly rising flood waters are deadly. If you are in a flood-prone
area, consider moving to higher ground. Never drive through a flooded
roadway. Remember, turn around don`t drown!

If a Tornado Warning is issued for your area, be ready to shelter
quickly, preferably away from windows and in an interior room not
prone to flooding. If driving, scan the roadside for quick shelter
options.

If in a place that is vulnerable to high wind, such as near large
trees, a manufactured home, upper floors of a high-rise building, or
on a boat, consider moving to a safer shelter before the onset of
strong winds or flooding.