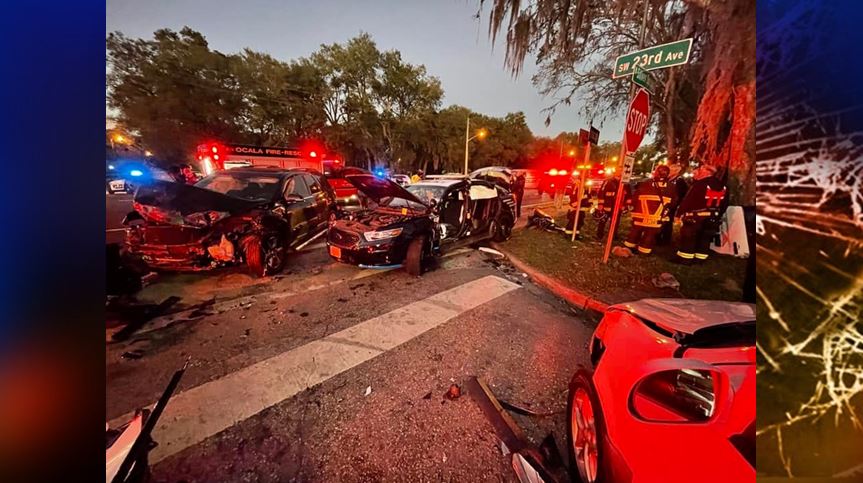 Ocala — An Ocala police officer was involved in a multi-vehicle crash on Monday.

Three people, including the officer, were taken to a local hospital and treated for non-life-threatening injuries.

On Facebook, OPD wrote the officer was trauma alerted but will be ok. He was released from the hospital the same day.

Multiple witnesses told Ocala Post that the officer was traveling down the wrong side of the street, which resulted in the crash. Another witness said he ran a stop sign and pulled out into oncoming traffic. Ocala Post reached out to OPD, however, they would not confirm nor deny this information.

Officer Isaac Mercer, 30, was allegedly responding to a call to assist another officer. It has been confirmed that he did not have his lights or siren activated.

OPD said they are investigating and have not released any further information surrounding the crash or the circumstances which led up to the crash. They also have video, which is not being released at this time.

On February 26, 2021, 71-year-old James Riley Montgomery was T-boned by an Ocala Police Department police officer who was running code without his lights and sirens activated.

Officer Jordan Pagano, who was doing 75 MPH in a 45 MPH zone, was driving Southeast on 17th Street when he slammed his cruiser into the side of Montgomery’s Wrangler.

The City settled the lawsuit for 125,000 after voting on whether or not the bodily injury claim should be paid despite the officer being at fault.

UPDATED on January 18, 2022, at 6:02 p.m.
OPD posted the following to their FB page:
“Ocala Police Officer Mercer was the officer involved in the crash. Prior to the crash, Ofc. Mercer was responding to a routine call to assist another officer. Ofc. Mercer was southbound on SW 23rd Ave. at a complete stop at the crossbar before crossing W Silver Springs Blvd. The crash occurred as Ofc. Mercer passed the eastbound lane.
Thankfully, no one involved was seriously injured. We’re overwhelmed with gratitude for all of your thoughts, prayers, and concern for our officer and the two citizens involved. We are continuing to investigate this crash and if we determine our officer is at fault, then he will be held accountable.”
MORE STORIES