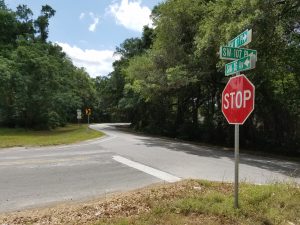 On April 28, 2017, a dash cam captured video of a Marion County sheriff’s deputy breaking three laws in less than 10 seconds.

The deputy in the video can be seen rolling through a stop sign, pulling out in front of another vehicle, and operating at twilight hours (dusk) with no headlights.

Under Florida statute 316.217, every vehicle operated upon a highway within this state shall display lighted lamps and illuminating devices as herein respectively required under the following conditions;

Due to the overhanging trees on 475A, visibility is further limited during twilight hours.

Under Florida Statute 316.123, except when directed to proceed by a police officer or traffic control signal, every driver of a vehicle approaching a stop intersection indicated by a stop sign shall stop at a clearly marked stop line.

At minimum, running a stop sign and nearly causing an accident could be considered careless driving.

To some, the video might not seem like a big deal. However, one could argue that a civilian most certainly would face punishment had the situation been reversed.

What do you think about the video?

Rain: Drive with your headlights on, it’s the law

Fog: Drive with your headlights on; it’s the law