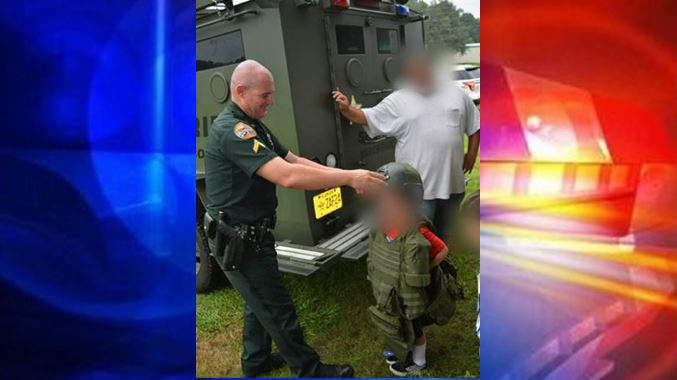 Ocala — An 18-year veteran of the Marion County Sheriff’s Office will not be prosecuted following his March 10 arrest on charges of domestic violence.

According to the State Attorney’s Office, the victim initially agreed to testify against Marion County sheriff’s Corporal Roy Allen Johnson, 42, but later, for unknown reasons, changed her mind.

Friends and family close to the case say they have witnessed Johnson’s behavior in the past and fear for the victim’s safety.

According to records obtained by Ocala Post, On March 5, multiple deputies responded to a residence after a caller reported a physical altercation between a deputy and a female victim.

When deputies arrived at the scene Corporal Johnson stated that he had been at a wedding with the victim and when he was ready to leave, she refused so he went home alone.

When Johnson arrived home, he tossed the victim’s clothes and a ‘Rae Dunn’ pottery collection outside.

When the victim returned home, Johnson said he locked her out because he was “tired of her sh*t.” Johnson also told deputies the victim was drunk which was later determined not to be true.

The victim stated that she came home to find all of her belongings on the front lawn and that, Johnson had destroyed her pottery collection.

According to the arrest affidavit, the victim was bleeding when deputies questioned her.

Johnson was told on the day of the wedding that he should not attend but he showed up at a later time.

During questioning, Johnson left out details of the argument and what transpired after he left the wedding.

According to reports, after Johnson left he began sending rude and vulgar text messages to the victim and called her multiple names.

Some of the text messages were shown to other guests at the wedding who said they feared for the safety of the victim if she were to return home while Johnson was there.

This incident is not Johnson’s first.

In 2019, Johnson battered the same victim but she dropped the charges because Johnson agreed to get counseling. Johnson attended one session and never returned. Additionally, a few months prior to the May 5 incident, the victim stated that Johnson pushed her onto the bed with force and attempted to smother her with a pillow. The victim has an audio recording of the incident.

At the May 5 scene, when deputies attempted to separate the two, Johnson became loud, belligerent, and began using swear words toward the victim.

Johnson stated, “Some fu**ing judges granted a fu**ing injunction.” As he walked by the victim he told her, “Bye, you sorry bi*ch. Kiss my a*s.”

On May 10, five days after the incident, an arrest warrant was finally issued and Johnson was taken into custody and later released on a $2,500 bond. He was placed on unpaid suspension.

In an email to Ocala Post, friends of the victim have expressed great concern and say that Johnson has a “bad temper and a short fuse.”

In the email, an unidentified woman wrote, “I am afraid for her life. MCSO knows he’s explosive and does nothing but make excuses.”

Johnson, who is no longer on suspension and has returned to work, was also cleared of a shooting in March of 2019 after he shot an unarmed man who was fleeing. In that case, Johnson said he feared for his life because he believed that the suspect was armed.

As for Johnson’s May 10 arrest, during a news interview, Sgt. Paul Bloom, stated, “We do have employee assistance programs that are available. We routinely make them available. It’s anonymous. Whatever it might be, PTSD, maybe an addiction, it could be anything, just financial troubles and you need to talk to someone, you need a counselor. It’s available and we encourage it.”

Johnson appealed his suspension and stated that there was not sufficient evidence to prove he battered the woman.

Marion County Sheriff Billy Woods accepted Johnson’s appeal and reinstated him. Woods does not plan to take any further action against Johnson.