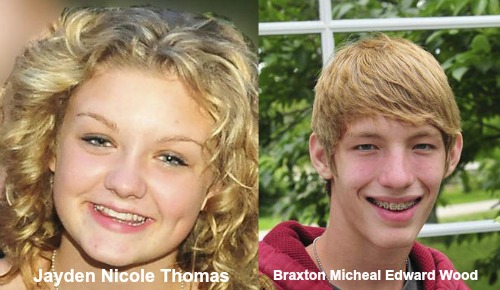 Police say an anonymous tip led them to the Black Ford Explorer the teens had driven from Michigan.

The two teens ran away on August 26, 2013, after Jayden’s mom told her she could no longer date Braxton. The two teens have been dating and according to the parents of both teens, the relationship had gotten quite serious. To serious for teens, the parents said.

Jayden had left a note for her mom on her bedroom mirror written in lipstick that read, “I love you so much. Stay happy and beautiful.”

Jayden had told her mom that “she was in love with Braxton and that she felt like she could not live without him.” Jayden’s mom told her that she no longer approved of the relationship.

Chicago Police said the two had been living in their vehicle since driving from Michigan. The Two were going to the local Starbucks and enjoying Chicago’s lakefront view, police said.

Neither of the teens have been in trouble with the law and both are reportedly good students that were just inseparable.

Both families will have to take the drive to Chicago and pick their children up from the police station.