Ocala PostOcala Newspaper - News without hiding the truth
More
Home News Local News The race for sheriff: You asked, we got answers
Marion County — Ocala Post reached out to the four candidates competing in the Marion County Sheriff’s race.

This article will not address crime rate statistics for no other reason than the fact that over the past few years, it was proven how statistics can be manipulated. Crime rate statistics, as stated by the Florida Department of Law Enforcement, are only as good as the agency reporting them.

Questions directed to the candidates were compiled from a series of more than 100 e-mails sent to Ocala Post from readers.

1.) Are you a supporter of the Second Amendment, including ownership of semi-automatic rifles such as the AR-15, sometimes inaccurately referred to as an assault rifle?

2.) If elected, what will you do about the Sheriff’s Office operating their own “media outlet”? Also known as “law enforcement run media,” which is greatly frowned upon by the public because it is usually biased and leaves out important information.

3.) What is your outlook on double dipping and the huge salaries being paid to those who have retired and then returned to the sheriff’s office?

Some of these high-paid associates do not even hold a degree, only a GED.

4.) Will you diligently push for body cameras and transparency?

5.) Would you push for the decriminalization of marijuana, as many counties have?

Marion County has one of the highest incarceration rates per capita in the state. Marion County commissioners have stated that they do not have any plans on adding the decriminalization of marijuana to their agenda.

6.) Would you be diligent in making sure deputies do not abuse their powers by arresting individuals for the sole charge of resisting arrest when it does not follow another charge? In other words, a law abiding citizen is pulled over and disagrees with a deputy, that deputy then arrests that person for resisting. Typically, a separate charge would precede resisting arrest. However, it appears that many Florida Law enforcement agencies have a history of not following protocol when it comes to someone being arrested for truly “resisting arrest.”

Dean was appointed sheriff in 1998, following the arrest of then-sheriff Ken Ergle, who stole more than $170,000 from an investment fund. Dean retired in 2012.

“Unfortunately, due to the recent, extreme negativity surrounding the Sheriff’s Office, now is not a time for any celebration. Rather, it is a time for determined resolve to overcome the difficulties of the agency. However, in the future there will again be a time for celebration when the agency is able to resume its rightful place as a four-star, accredited, premier Sheriff’s Office, which is recognized for its innovative community policing, public safety effectiveness, fairness, reliability and for its performance excellence,” Dean said.

Dean went on to say, “I believe my experience as the former elected Sheriff of Marion County is necessary to complete the job of turning the agency around. I have a genuine desire to not only serve the dedicated men and women of the Sheriff’s Office, but also, together, to again be able to serve the people of Marion County.”

Third, I do not believe in double dipping for Sheriff’s Office administrators who retire, and then wish to return to an administrative position. Starting with myself if I am elected, I will only accept as my salary an amount equal to the difference between my current law enforcement retirement pay and the stated salary for the Sheriff’s position. If I determine that any retired administrator’s help is still needed at the Sheriff’s Office, the same “One job-one salary” rule will apply to them as well.

Fourth, I fully support the use of body cameras by patrol deputies. It is critical that the right decisions be made regarding the selection of the body cameras and the IT necessary to support the storage and retrieval of all body camera video.

Fifth, I believe that marijuana is a gateway drug which is harmful. The DEA still classifies marijuana as a Schedule I drug. I do not think it is wise to decriminalize marijuana, which is used for recreational purposes.

Sixth, if elected, I will swear to uphold the Constitution of the United States and of the State of Florida. All Sheriff’s Office deputies and corrections officers will take the same oath. Under the Constitution, citizens have a right to free speech when being stopped for a traffic infraction, except if that speech amounts to “fighting words.” Deputies should always try to deescalate situations involving any tense interactions with the public, especially in cases of non-criminal traffic stops. Resisting arrest charges should never be used just for the sole purpose to quell protected speech.

Woods has lived in Ocala his entire life. He has been with the Ocala Police Department for 26 years and gained knowledge through various units and supervisory positions he has held.

Woods said, “Looking to the future, I ensured that my education had two foundations. First, a detailed understanding of Criminal Justice Administration. And second, the fundamentals of Business Management. As sheriff, you are the CEO of a large corporation and a business mindset is essential.”

Woods went on to say, “It is time for an infusion of new ideas, eliminating the internal politics and supporting the men and women at the Sheriff’s Office who are on the front lines serving our community.”

First, I believe that my primary mission is to protect our citizens and preserve their individual rights and freedoms afforded by our Constitution and Bill of Rights. With that in mind, I believe and support the premise that law abiding citizens have the right to acquire, own, possess, use, keep, and bear firearms. This includes concealed and open carry with the understanding that such carrying comes with great responsibility and there should be hands-on training with education in order to open carry just like the concealed carry.

Second, [MCSO] has too many [Public Information Officers]. Now, I do not oppose civilian based PIOs, and running a media show has its budgetary issues and it’s not a necessity. As for releasing information, the public record law needs to be followed and given when asked for.

Third, there are so many issues with double dipping that we do not have time to talk about it. The large salaries attached with retirement salary needs to stop.

Fourth, absolutely on the body cameras. [Body cameras] should have been put in place years ago. I started the body camera program at the Ocala Police Department for the motor unit.

Sixth, the last question is difficult to answer because it cannot be applied to every scenario. It should not be the norm, though; it should be the exception.

If you wish to read more about Billy Woods you can visit his website at http://billywoodsforsheriff.com/

In speaking with both candidates, they appear to be passionate about their communities.

Ocala Post strongly urges everyone to vote to make a difference.

The most important aspect of voting is knowing the candidates. Visiting each of their websites is a great way to do that. 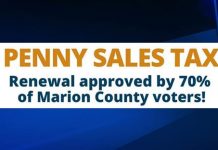