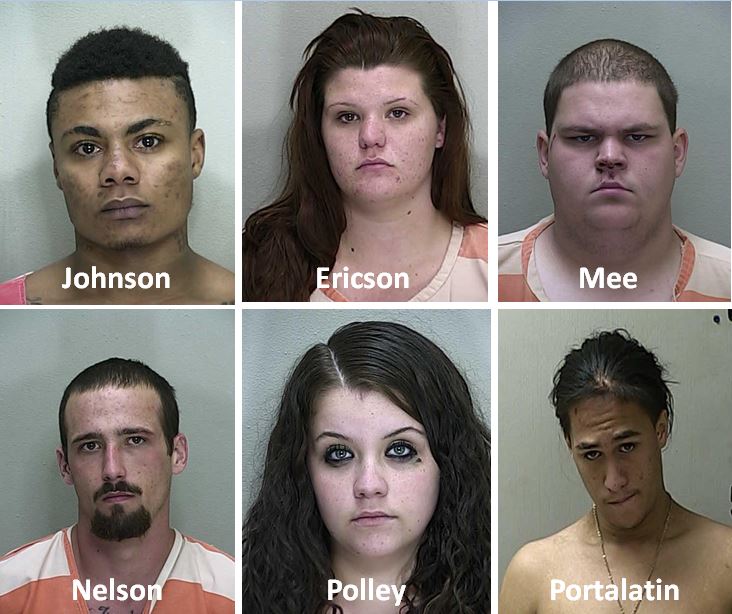 Belleview, Florida — On January 19, at approximately 9:45 p.m., Marion County Sheriff’s Office deputies, along with Belleview Police Department officers, were dispatched to 5469 Southeast 104th Place, Belleview, in reference to a home invasion and shooting.

When officers arrived on scene, they found victims Dominique J. Johnson, 19, Emanuel Estada-Portalatin, 17 and Christopher Hillard, who were inside the house at the time the home invasion.

According to repots, Estada-Portalatin was shot during the home invasion and transported to a local hospital to be treated for his injuries.

Johnson told MCSO deputies that two white males had broken into the residence and that one of them hit Hillard in the back of the head with a metal bar. The other suspect pointed a gun at Johnson and shot Estada-Portalatin in the arm.

When deputies attempted a traffic stop on a silver Navigator, which was reported leaving the scene of the shooting, the driver fled at a high rate of speed and later crashed into a ditch.

The occupants of the vehicle, the driver, Cedric Mee, 23, Gregory Nelson, 24, Rebecca 18, and Jaclyn Ericson, 22, were arrested at the scene of the crash.

During questioning,  Mee stated that prior to the home invasion shooting, he, Nelson, Polley, and Ericson met at Ericson’s house. They discussed Mee’s plan to retaliate against Estada-Portalatin and Johnson for an armed home invasion robbery they committed on Ericson and another man at the Vacation Host Inn on November 1, 2015.

According to a press release, Mee stated that all four drove to the incident location where he committed the armed home invasion with Nelson and shot Estada-Portalatin.

Victims Estada-Portalatin and Johnson were also arrested and charged with the armed home invasion robbery they committed in November.

Cedric Mee- Aggravated Battery, Aggravated Assault with a Deadly Weapon, Use/Display of a Firearm while Committing a Felony, Occupied Burglary with Assault or Battery, Possession of Weapon by a Convicted Felon, Resist Officer without Violence, Resist Officer/Flee Elude Law Enforcement Officer with Lights and Sirens Active. His bond was set at $49,500.

Gregory Nelson- Aggravated Battery, Aggravated Assault with a Deadly Weapon, Occupied Burglary with Assault or Battery. His bond was set at $37,000.

Rebecca Polley- Occupied Burglary with Assault or Battery. She is being held on a $25,000 bond.

Jaclyn Ericson- Occupied Burglary with Assault or Battery. She is being held on a $25,000 bond.

Dominique J. Johnson- Home Invasion Robbery with a Firearm. Bond was set at $25,000.

Emanuel Estada-Portalatin- Home Invasion Robbery with a Firearm, Possession of Weapon or Ammo by Delinquent, Display of Firearm during a Felony, Violation of Probation. He is being held without bond at this time.

Jaclyn Ericson also made headlines in January 2014, after she got high on cocaine and killed her 5-month-old baby.  Read that full story here.