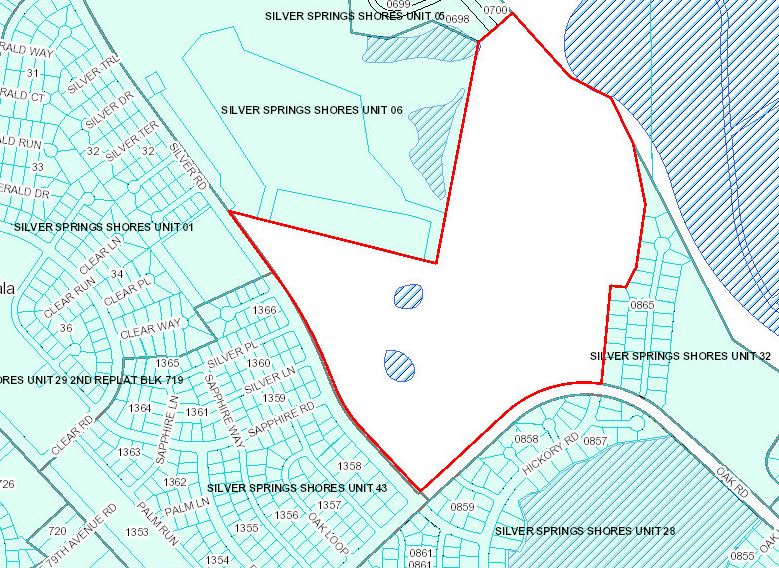 The Marion County School Board will now head to a courtroom to try and enforce Florida’s Eminent Domain statute (73.015) to obtain land for a new school.

Marion County Public Schools Public Information Officer, Kevin Christian, said that the school district has been trying to purchase 70 acres of a 128-acre parcel in Silver Springs Shores that is non-inhabited.

The parcel is located near Lake Joy, at the south end of the Country Club at Silver Springs Shores, which is west of Hickory Road.

It has been suggested that Lake Weir Middle School is beyond repair and that the new school would replace LWMS — leaving the more than 60-year-old building vacant.

LWMS staff members told Ocala Post that the school has been “seriously neglected” and the school was described as “falling apart”.

Christian said, “In the meetings I have attended for years, including dozens of school board work sessions and board meetings, I do not recall an effort to ‘replace’ Lake Weir Middle school.”

If built, Christian said the Silver Springs Shores school would alleviate some of the overcrowding at Lake Weir Middle School.

“The school is currently at 95 percent capacity,” Christian said. He went on to say, “The school is serving more students than it was physically designed to serve.”

Christian said, “Despite multiple offers, the land owner failed to close on the purchase agreement. The board’s first offer resulted in required appraisals on the land.  Those appraisals proved the board’s offer was too high based on then-current land values. After the appraisals came in, the board’s second offer was above fair-market value. Accordingly, the board passed by ‘super majority’ the updated offer to buy the land and reached the closing phase.  However, the owner never closed the deal on the second-offer purchase price. The board even extended the contract to purchase into 2016 based on the owner’s request.  Despite good-faith efforts from the school board, the land owner never responded.”

Christian also said that the school was not neglected, but rather repairs were done as the budget allowed.

The owner of the land is listed as Shuaney Irrevocable Trust of Richard Colbert, and since the owner has refused to sell, the school district will now use Eminent Domain to try and force the owner to sell.

The Eminent Domain statute is considered by many citizens to be outdated and unconstitutional.

According to legislatures, the statute has not been updated in 16 years .

On July 1, 2000, the statute was updated to state that, before an eminent domain proceeding is brought under the chapter or chapter 74, the condemning authority must attempt to negotiate in good faith with the fee owner of the parcel to be acquired, must provide the fee owner with a written offer and, if requested, a copy of the appraisal upon which the offer is based, and must attempt to reach an agreement regarding the amount of compensation to be paid for the parcel.

Christian says the school board has met the requirements.

The statute also states that, during a forced sale, the landowner must be offered a fair-market price.

In addition to citizens being upset over the government trying to force someone to sell their land, parents are also concerned about registered sex offenders in the Silver Springs Shores area.

In the state of Florida, sex offenders cannot live within 1,000 feet of a school. This also includes any day care facility, park, or playground. However, if the offender was convicted prior to 2004, which is the year the statute was passed, then he or she is exempt.

Furthermore, school districts are not required to vet an area of interest for sex offenders prior to building a school. The burden falls solely upon the sex offender.

Ocala Post wants to hear from you. What do you think about Eminent Domain? Do you think a person should be forced to sell their land? Also, do you think school districts should be required to consider sex offenders prior to building a school.

Ocala Post will publish more details as they become available.