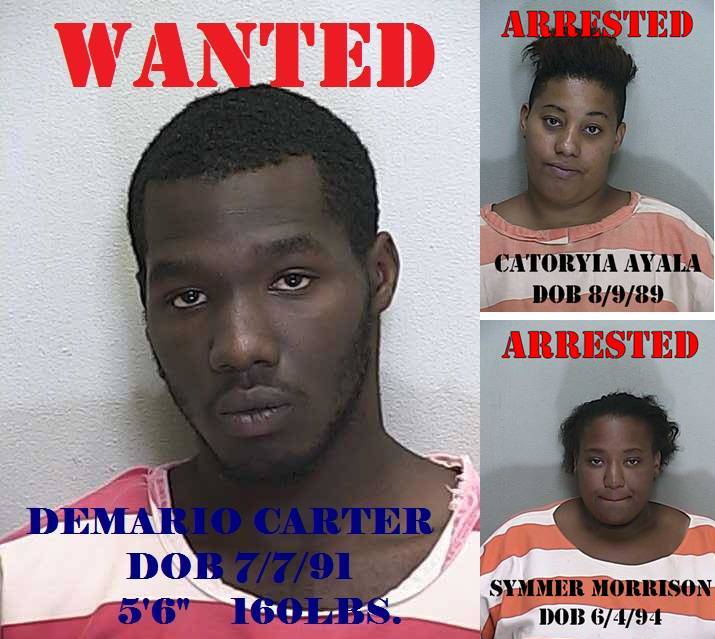 Ocala, Florida — (Official Press release) Six cases Church Burglary and two cases of Residential Burglary have occurred from September 11, 2014, to September 22, 2014. They are as follows:

There was a broken glass door and entry was made. Pieces of concrete were thrown into the glass door to break it. The burglary occurred over night. Inside the church a door to the Pastors office was kicked in. Electronics were moved around and a flat screen Vizio television was moved to the floor, but nothing taken.

* 9/12/14 at 7:50 A.M. – New Saint John Baptist Church, 2251 NW 2nd St. for a report of a second burglary that occurred overnight. Another large glass door was broken and entry was forced into the Pastors office. This time the Vizio television (that was moved the night before) was taken.

It was found that the lower glass pane of the window was shattered and a door on the west side of the building, to the right of the broken window, was discovered partially open. An Epson, Power Lite SS Series projector was missing, as well as a Samsung Digital camera. A check of the “music room” revealed an empty cash box on top of a chair that had $15 missing. Two small pieces of black asphalt and a rock, that were used to break the window, were on the hallway floor, inside the building.

The resident stated that around 10 A.M. he left his residence with the windows open. Upon his return at 11:20 A.M., he noticed a screen out of a living room window. Inside he discovered that unknown had searched drawers and closets and removed over $100 worth of property. Mr. Forde reported that numerous tax/social security documents, a Funai brand DVD player, a Sony DVD player, approximately 20 newer DVDs and a Kyocera brand (“government food stamp phone”) cellular phone was taken.

Sometime between 9:00 A.M. and 10:00 P.M. someone entered her apartment and stole a 19” flat screen TV. Victim reported that when she got home the front door was locked but she found open windows. A TV was found to be missing from one room.

Unknown had kicked in the door to the church a second time. The pastor advised that Friday September 19th unknown broke into the church and scattered some stuff around, but nothing was missing so they didn’t report it. This time an Epson Projector was stolen.

Officers and several Detectives responded to a 911 call of a burglary in progress (third one at this location).

Detective M. Buetti arrived on scene first within minutes of the call and spoke with a witness (on a bicycle) who she identified as Demario Carter born 07-07-91. He reported that he witnessed a young black male throw the item that damaged the door. He described the suspect as: possibly 16 or 17 years old, wearing gray, “skinny” style jeans with no shirt, thin with an afro on a silver bicycle. He even provided a direction the suspect headed. Officer searching for the suspect never found him.

Church employee reported that while she was inside cleaning, she heard glass break. She found that someone had thrown an object against the glass door on the west side of the church. Entry was not made as the glass was broken, but still in place and she did not see who broke the door.

On 9/23/14, it was discovered that items from some of the burglaries were pawned locally by a Catoryia Ayala, 25; a Samsung Digital camera from the United Holiness Church of Christ burglary on 9/13/14, the HP laptop from the Green Pastures Worship Center burglary on 9/16/14, and a Sony DVD player from the residential burglary at 1715 SW Fort King St. on 9/17/14. Detectives Hardman, Buetti, and Sirolli arrested Catoryia Ayala for 3 cases of Dealing in Stolen Property.

In their investigation, detectives were able to identify Demario (Mario) Carter, 23, as the suspect in the burglaries. Mario is the same subject who claimed to be a witness to an attempted burglary at New St. Johns Missionary Baptist Church on 9/22/14. Mario’s girlfriend was identified as Symmer Morrison, 20, who also sold stolen items from burglaries to two local pawn shops. She sold the Vizio television from the 9/12/14, New St. John’s Missionary Baptist Church burglary and a projector from the Word of God Church burglary on 9/21/14. Morrison was arrested on 9/24/14, for Dealing in Stolen Property charges in two cases.

Information was gained that Carter is homeless, but has a location where he commonly sleeps. Detectives went there and located more of the stolen items, to include a projector, a music CD and a small TV.

On September 25, 2014, warrants in 4 Cases were obtained for the arrest of Demario Carter for the following:

Probable Cause for Carter’s arrest exists for 4 more cases on the following charges:

Carter is also currently on Felony Probation reference charges for Burglary, Resisting Arrest With Violence and Battery on a Law Enforcement Officer.