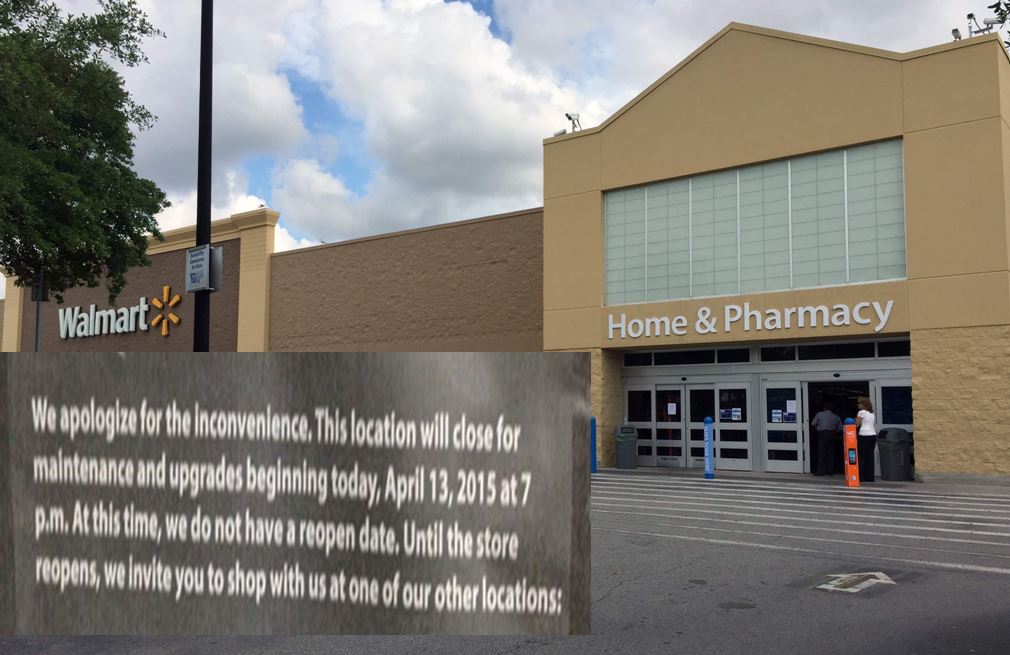 The closing of several Walmart stores has left nearly 2,000 employees jobless and looking for answers, while some say they believe it is military-related.

A sign was taped to the door of the businesses that read: “We apologize for the inconvenience. This location will close for maintenance and upgraded beginning today, April 13, 2015, at 7 p.m. At this time, we do not have a reopen date. Until the store reopens, we invite you to visit one of our other locations.”

The stores that have closed are located in Tulsa, Oklahoma; Brandon, Florida; Midland and Livingston, Texas; and Pico Rivera, California.

The Texas stores are reportedly in the top 10 of Walmart’s busiest and highest-earning stores.

Walmart stated that the stores — all at the same time — had plumbing problems.

“The issues mostly relate to clogs and water leaks in the plumbing – we’ve had persistent issues over the last several years. These incidents impact the availability of water and create drainage issues for critical areas of the store which impacts our ability to serve customers,” a Walmart spokesperson said.

Employees and other businesses that rent space from Walmart inside the stores said they were not given any warning. Business owners said not only were they not told about the closing, but they were very rudely only given a few hours to gather their belongings and exit the store.

Walmart had not even cleared perishables out of the store. Something employees said they would normally help with.

Employees from all stores have stated that they have never seen a contractor inside the store that suggested there were problems.

Walmart says the stores could be closed for up to six months.

City and county officials in every location where a store has closed have said that not one permit for any type of plumbing or construction has been issued. And, a long-time employee of the Brandon store told officials that the store has not had any major plumbing issues since she has worked there.

City officials said it is very suspicious, and that anytime any Walmart has ever done repairs the store has always remained open.

Officials said that when a plumbing contractor showed up at the Brandon store and offered to help with the permit process, he was turned away.

Employees reported that customers were standing in line at the locked doors hoping to get their prescriptions, but Walmart executives in suits turned them away. Security guards were later placed outside the pharmacy.

Analysts said the abrupt closing of the stores without warning any to its vendors or employees, and only giving a 5-hour notice, falls right in-line with the way Walmart has always treated customers and employees.

In fact, in 2014, Credit Suisse analyst Michael Exstein predicted there would be store closures.

“High sustained transportation costs and broader consumables distribution appear to be reshaping consumer shopping behavior,” Exstein wrote in a research note. “Walmart and Target have been slow to react thus far, but we think the broader trend will call for the rollout of smaller ‘big boxes.’ ”

In 2014, Walmart announced that its earnings had fallen. The retailer also said that sales were “slightly negative” on its third-quarter report, which meant U.S. store sales fell relatively flat.

“There are just entirely too many Walmart stores,” Exstein said.

Officials said the cover story of plumbing issues is lacking in credibility. They said it just seems a little weird that all of the stores had the same exact problem on the same day, and would be closed for the same length of time — six months.

Some analysts have speculated that Walmart’s recent wage increase for some of its employees might be the cause of the closures.

The increase in wages most certainly would have to be made up in some other way, because everyone knows that Walmart executives would not take it from their own salaries. And the company would have a very difficult time passing the “buck” onto its customers. After all, Walmart advertises itself as the “low price leader.”

If the increase was not passed onto customers, then it would be passed onto its vendors. Vendors would then be forced to lower their prices or stop servicing Walmart as a supplier. This in-turn usually causes a domino effect of layoffs.

Employees have turned to social media by the thousands. Many have accused Walmart of giving raises knowing it would layoff workers. While others have accused the retail giant of closing the stores in an attempt to prevent Union organization.

Then, of course, there is the conspiracy theory of Jade Helm 15, a new Special Operations exercise that runs from July 15 to September 15. Army Special Operations Command announced it in March, saying the size and scope of the mission set it apart from many other training exercises.

Many have the idea that Walmart executives would allow its stores to be used as a holding area for FEMA camps, and that the exercise is nothing short of a Martial Law training exercise.

Right now officials are investigating to see if Walmart has broken any laws, or handled the closing of its stores in an ill manner.

It is too early in the investigation to tell, and officials said they do not want to speculate.

Whatever the reason, there are now at least 2,000 more unemployed people in the U.S.

Ocala Post reached out to Walmart and asked: “Does Walmart foresee any “plumbing problems” at any of the Walmart stores in Ocala, Florida, that would cause a closure?”

An immediate response was not received.