Ocala, Florida — Michael Tarver, the owner of Polliwog Dental, LLC., is hoping to have his license reinstated this month.

Tarver, who practices pediatric dentistry, got his medical license suspended in early September 2013, after serious allegations of child endangerment surfaced.

Starting in 2012, Tarver has had multiple complaints filed against him at the Ocala Police Department. Each time that Tarver was investigated by detectives, he was cleared.

Polliwog Dental was investigated by the DEA back in July of 2013 for suspicion of overmedicating children. Specifically using Demerol to sedate and “control” children who Mr. Tarver felt were misbehaved, according to his own words.

In a police report filed with OPD, one victim told investigators that she was crying and scared, she ran down the hallway in an attempt to get to her mom. The victim said Tarver chased her down the hallway, picked her up like a baby, and while wearing gloves, covered her mouth and nose. The victim stated she had trouble breathing and Tarver asked her “Are you done?” then placed her back into the dentistry chair. Later, after being released, the mom noticed her child’s lip had been busted. An employee of Polliwog confirmed the victims’ allegations, according to police. OPD questioned Tarver and he said, “I remember the patient because she was so badly misbehaved. She ran down the hallway kicking and screaming at the dental staff. I didn’t put my hands over her mouth. The child had to be sedated due to her extremely poor behavior.” Tarver was not charged, according to OPD, he didn’t commit any criminal offenses.

June 26, 2013, OPD received a complaint about a child that received a 1-1/2″ laceration in the middle of his forehead. Tarver “claims” the child tripped over his own feet causing him to fall and hit his head. Tarver did not call EMS. When questioned by OPD, Tarver said, “I am Emergency Medicine Certified, therefore I did not feel the need to contact EMS.” OPD notified DCF upon this investigation due to OPD being called out multiple times starting in June of 2012. The injury did require stitches.

In one incident, a parent said that Tarver placed his hand over the nose and mouth of her child until the child lost consciousness.

On September 26, 2013, The State Of Florida Department Of Health filed an ‘Administrative Complaint’ against Tarver with the Board of Dentistry.

The complaint is as follows:

2. At all times material to this complaint, Respondent was licensed to practice as a dentist in the State of Florida, pursuant to Chapter 466, Florida Statutes (2011-2012), and was a Board Certified Pediatric Dentist.

4. On or about April 17, 2012, R.R., a four-year-old female patient, presented to Polliwog for a tooth extraction. Respondent sedated R.R. with Demerol prior to the procedure.

5. Demerol is the brand name for meperidine and is prescribed to treat pain. According to Section 893.03(2), Florida Statutes (2011-2012), meperidine is a Schedule II controlled substance that has a high potential for abuse and has a currently accepted but severely restricted medical use in treatment in the United States. Abuse of meperidine may lead to severe psychological or physical dependence.

6. During the procedure, Polliwog staff members noted that R.R. had stopped breathing and had turned blue. Respondent administered Narcan to reverse the sedation and ordered a dental technician to retrieve a resuscitation bag from the crash cart.

7. Narcan is the brand name for naloxone, a drug commonly used to counter the effects of opiate overdose. While naloxone is a legend drug, it is not a controlled substance under Section 893.03, Florida Statutes (2011- 2012).

8. Respondent administered breaths using the resuscitation bag, and after a short time, R.R. resumed breathing. Respondent recorded the incident in the patient record as a period of “brief apnea.”

9. Respondent instructed Polliwog staff members to make no mention of the incident and admonished them that he would terminate and sue any staff member who mentioned the incident. No one informed R.R.’s parents that R.R. had stopped breathing and had been resuscitated.

10. On or about June 4, 2013, Respondent performed a dental procedure on A.R., a four-year-old female patient. A.R.’s mother verbally consented to local anesthesia only. Respondent placed A.R. under conscious sedation for the procedure.

11. At the conclusion of the procedure, A.R. had lacerations on her cheek and inside her mouth. A.R. also had bruises on her neck and shoulders and had urinated on herself.

14. Petitioner re-alleges and incorporates by reference paragraphs one (1) through thirteen (13) as if fully set forth herein.

15. Section 466.028(1)W, Florida Statutes (2011-2012), subjects a dentist to discipline for “Making deceptive, untrue, or fraudulent representations in or related to the practice of dentistry.”

16. Respondent made deceptive, untrue, or fraudulent representations related to the practice of dentistry when he retroactively altered medical records without properly identifying them as late entries.

17. Based on the foregoing, Respondent violated Section 466.028(1)(1), Florida Statutes (2011-2012) by making deceptive, untrue or fraudulent representations in the practice of dentistry.

18. Petitioner re-alleges and incorporates by reference paragraphs one (1) through thirteen (13) as if fully set forth herein.

19. Section 466.028(1)(m), Florida Statutes (2011-2012) subjects a dentist to discipline for “Failing to keep written dental records and medical history records justifying the course of treatment of the patient…”

20. Respondent failed to keep appropriate dental records when he retroactively altered medical records without properly identifying them as late entries.

21. Based on the foregoing, Respondent violated Section 466.028(1)(1), Florida Statutes (2011-2012) by failing to keep written dental records justifying the course of the treatment of patients.

22. Petitioner re-alleges and incorporates by reference paragraphs one (1) through thirteen (13) as if fully set forth herein.

24. Section 456.072(1)(r), Florida Statutes (2011-2012), subjects a licensee to discipline for “Improperly interfering with an investigation or inspection authorized by statute, or with any disciplinary proceeding.”

25. Respondent improperly interfered with an investigation or inspection authorized by statute when he retroactively altered medical records after learning that the Department was seeking those records under subpoena.

Regardless of the serious complaints against Tarver, criminal charges have not been filed. Parents have expressed their anger through social media, some calling for Tarver to be arrested for child abuse. Others blaming the State Attorney’s Office, claiming they have shown favoritism to a doctor.

Ocala Post reached out the state attorney in order to understand why charges have not been filed against Tarver for child abuse or child endangerment.

How or what guidelines were used to determine Tarver should not be charged with Child Abuse?

State Attorney Bill Galdson said, “As with every case, we evaluate the legally admissible facts presented by the investigators and then compare those facts with the law applicable in each case. There are no set guidelines used in such evaluation, but among the things we consider are the seriousness of the crime, the existence or non existence of witnesses as well as their ability to communicate what took place, and the nature and circumstances surrounding the allegation. Furthermore, when evaluating a case, we are ethically bound to file only charges for which we have a substantial likelihood of a conviction at jury trial.”

Gladson said, “This office was asked by detectives to review three separate incidents concerning potential child abuse. Some of these allegations had already been reported to the Department of Children and Families months prior to being referred to the Ocala Police Department.

Each case was reviewed to determine whether, if true, the allegation would constitute the crime of child abuse. To prove the crime of child abuse beyond a reasonable doubt, the State would have to prove that a defendant knowingly or willfully, and intentionally, inflicted physical injury, or committed an act that could reasonably result in physical injury, to a child.

At the time, physical injury was defined as ‘death, permanent or temporary disfigurement or impairment of any body part.’ During their investigation, the Detectives with the Ocala Police Department conducted numerous interviews of staff members, reviewed surveillance video, photographs, medical records, physical evidence as well as interviewed the complainants in the cases.

Based on the evidence available, it was decided that no single allegation, if proven as alleged, would constitute the crime of child abuse such that any conviction could be sustained on appeal. This office did not review, and was not asked to review, any matter being investigated by the Department of Health or the Board of Dentistry.”

Ocala Post expressed to Gladson that parents had accused the state attorney’s office of showing favoritism toward Tarver, and Gladson said, “I can assure you that such an assertion is completely baseless and not grounded in reality.”

With the Department of Health nor the Board of Dentistry asking for a formal investigation, it seems Tarver will escape criminal charges.

Courtney Gager with the Department of Health told Ocala Post that Tarver’s case will be presented to the Board of Dentistry on November 15, 2013. This is following the ‘Settlement Agreement’ that Tarver signed on October 6, 2013.

The agreement basically sets forth guidelines Tarver would have to follow if his license is reinstated. Guidelines such as continued education, periodic inspections of his office and records, and fines up to $15,000. Tarver still denies any of the allegations, blaming parents on Medicaid and their children’s behavior.

In previous documents prepared by the Department of Health, they noted, “A less restrictive sanction would not suffice to protect the public from the danger posed by Dr. Tarver. Dr. Tarver has shown an inability and/or unwillingness to comport with the standard of care required in practicing pediatric dentistry. Dr. Tarver’s attempt to conceal his violations by altering patient records indicates that he fails to recognize the importance of the laws governing dentistry and indicates that Dr. Tarver is likely to continue to commit violations in the future.”

Parents have stated numerous times to Ocala Post and through social media that if Tarver has his license reinstated, they fear eventually Tarver will “accidentally” kill a child, and then it will be too late. 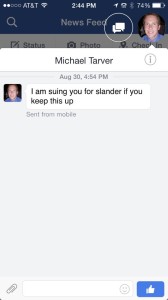 Facebook user, SandraRenee Seales St Denis, told Ocala Post she had posted a message on Ocala’s Word of Mouth’s facebook page about how dangerous pain medications are for small children. Tarver then sent her a message threatening to sue her for slander if she “Kept This Up.” Much like he did with his staff members when the initial investigation began.

It is clear from notations made by the Department of Health that it is statistically likely Tarver will continue to violate laws if he is allowed to keep his license. Something parents in Marion County do not want to happen.