Marion County — In a unanimous vote during a regularly-scheduled meeting on May 19, 2015, the Marion County Board of County Commissioners removed an appointee to the Marion County Industrial Development Authority (IDA) following objectionable remarks made by the appointee on a social media forum. Marcel “Butch” Verrando, who was first appointed to the IDA by board vote in June 2011 and then again in December of the same year, was removed from advisory board service effective immediately. His term would have expired in November 2015.

“On behalf of the Marion County Board of County Commissioners, I extend my sincerest apologies to all members of our community for the racially and culturally insensitive comments made on social media by an appointee to one of our local advisory boards. Those comments do not represent this board’s nor our dedicated county staff’s views and will not be tolerated. This Commission is committed to treating all citizens equally,” Commission Chairman Stan McClain said. “All individuals appointed by the Commission to serve on an advisory board are expected to exhibit the highest standards of professionalism in their public conduct, and Mr. Verrando failed to uphold his oath.”

Verrando posted the comments to a thread on the “Marion County Political Forum” Facebook page on Monday, May 18, 2015.

According to an e-mail received by Ocala Post, Verrando posted, “Black unemployment percentage is exceeded only by Native Americans and in 2012 they had the highest unemployment rate, education is way a head [sic] of hispanic [sic] so why can’t they get a job? My experience was that the only time a black guy applied for work it was because they were on probation and HAD to have a real job.” He then posted this hyperlink.

Verrando was responding to what some called “other stereotypical-type” comments that had been posted on the forum. 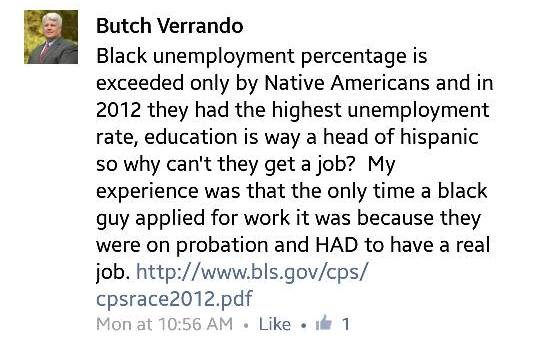 Moving forward, the County Commission will advertise the IDA vacancy and appoint another individual to serve in the future. The county will also be extending an invitation to the advisory boards to participate in the county’s long-standing Cultural Diversity and Professional Ethics employee training sessions.

The Marion County Board of County Commissioners is the primary legislative and policy-making body for the unincorporated areas of Marion County. The IDA was created for the purpose of financing and refinancing capital projects including air and water and other pollution and waste control facilities, as well as industrial and manufacturing plants with pertinent facilities.

This is not the first time Verrando has been the center of controversy. In September of 2014, Verrando came under fire after he publicly attacked a U.S. military firefighter veteran and former volunteer firefighter for Marion County Fire Rescue for suffering from post-traumatic stress disorder (PTSD) on an online forum.