Ocala, Florida — Post-traumatic stress disorder is a serious condition that can be very debilitating and even result in the death of the individual afflicted. This condition not only disproportionally affects soldiers, but also firefighters, paramedics, EMTs, and law enforcement officers.

On Aug. 12, 2014, at 1:55 p.m., Verrando created a post on Marion County Political Forum, moderated by community activist Stan Hanson via Facebook, beginning with, “We have another Union sell out.”

U.S. military veteran (worked for the military in providing fire and EMS to troops in Iraq) Samuel J. Matychak III responded to the thread talking about his support for a candidate because of their “mutual stance on public safety.” Verrando responded on Aug. 12 at 4:32 p.m. with, “Hey at least I’m not crazy!”

Verrando added after some discussion on Aug 15 at 7:43 p.m., “Mr Matychak, I need not even attempt to answer your alogations [sic] as you were barely making sense (again), is your lithium supply getting low?”

Matychak responded with, “Also Butch Verrando, you need to stop the attacks on my mental health because you are totally out of place. I am not a damn mental case and I am not on lithium. I dislike people who thinks [sic] they know it all. I will make it clear again, I served this Country from 2005 to 2010 in Iraq. Yes, I have PTSD. So, before you throw out accusation [sic], you better have the facts first or you will get burned.”

Verrando, at 8:12 p.m., stated, “Matychak I don’t ‘need’ to do anything…,” further adding at 8:14 p.m., “Gee Sam how could you have PTSD for being a civilian none combatant over there? Maybe too much time at the fire house [sic]?”

At 8:41 p.m., Verrando questioned how Matychak could receive such a diagnosis asking, “…so what major trama did Sam witness? That caused him to develop PTSD [sic]?”

Matychak did what no veteran should have to do by detailing in part what his job was in the military and what he saw.

“Butch, I saw death, such military personnel burned in their vehicles to blown body parts, having prisoners of war throwing pee and crap at me, to having a 8 year old Iraqi girl died on me to the CSH (Combat Support Hospital), getting shot at, having a vehicle blow up, and much more. My job was Combat Firefighter/Medic [sic].”

James Hoyne at 9:13 p.m. added an anonymous comment from a veteran who served with Matychak. “I would tread lightly before I embarrass you on your little political hi horse thread. I served with Sam in Iraq and I was there when windows were blown out, mortars exploding all around us, doors blown shut, and the military calling frantically for the fire dept to come assist in the middle of a fire fight that was the largest since falluja. I was there with Sam so I can deff vouch for him. You sir don’t have a clue, and quite frankly I don’t even know how you are involved in politics. Don’t question his PTSD because I have it as well [sic].”

In a statement Ocala Post received, Ryan O’Reilly, Secretary of Professional Firefighters of Marion County said, “Individuals who serve their country and those who volunteer to serve their communities as firefighters, should never have to face ridicule or condemnation for the wounds they receive whether physical or emotional.”

“I refuse to believe these abhorrent statements made by Fire Advisory Board member Marcel “Butch” Verrando represent the values of this community. Veterans and first responders should never be marginalized nor mocked for the medical conditions that arise from their service to this country and their communities,” said O’Reilly.

O’Reilly went on to say, “We believe that Mr. Verrando should be immediately removed from his position on the Fire Advisory Board as a person whose beliefs do not accurately reflect those of the citizens of Marion County. His actions and behavior are unacceptable and should not be tolerated. Service men and women, as well as first responders, who are afflicted with medical conditions, should be treated with the respect and dignity they deserve.”

“Moreover, Mr. Verrando’s intolerant comments regarding genuine medical conditions that may affect first responders proves that he is not fit to act in any capacity that would have an influence on the working conditions of first responders.” 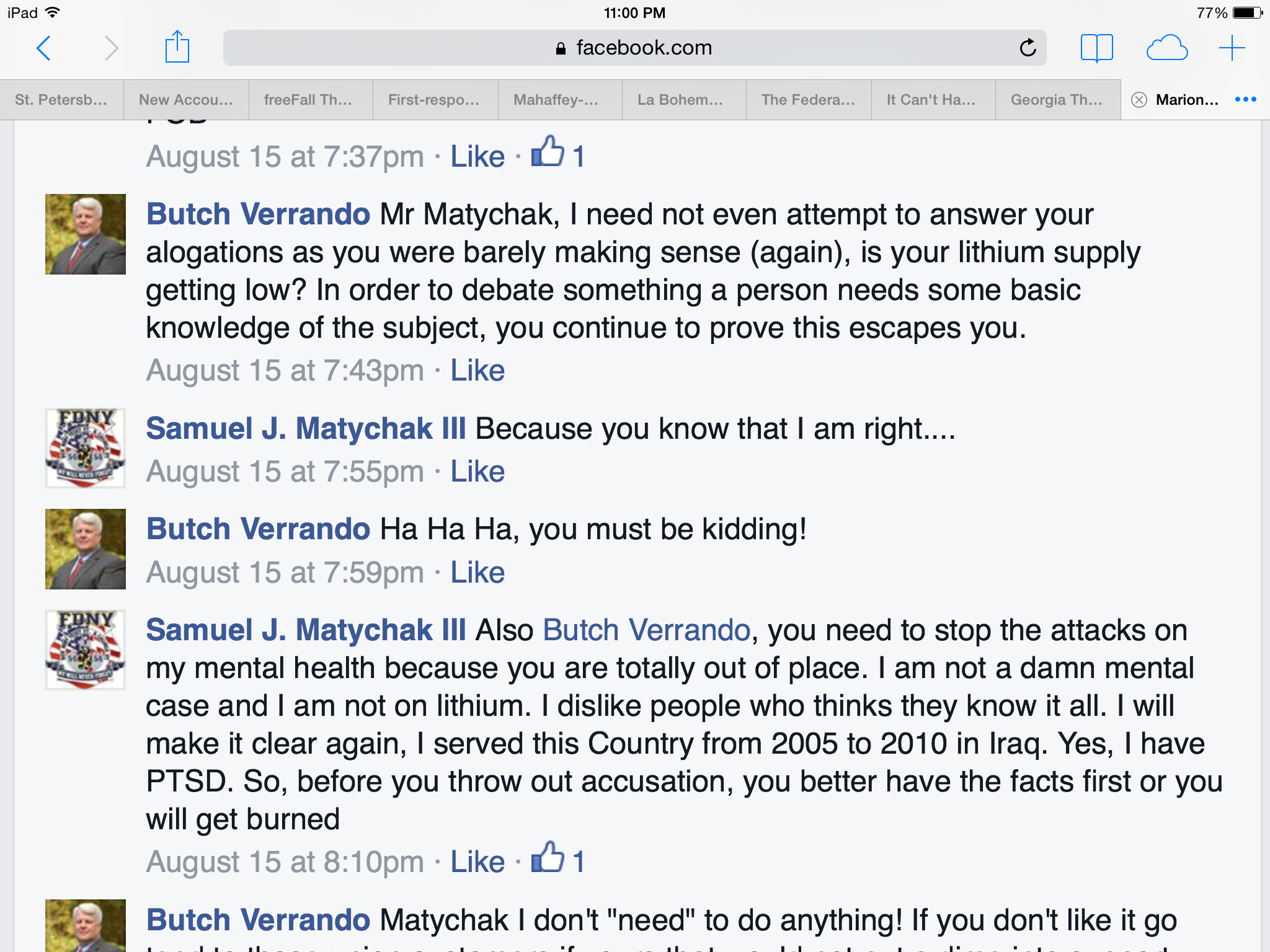 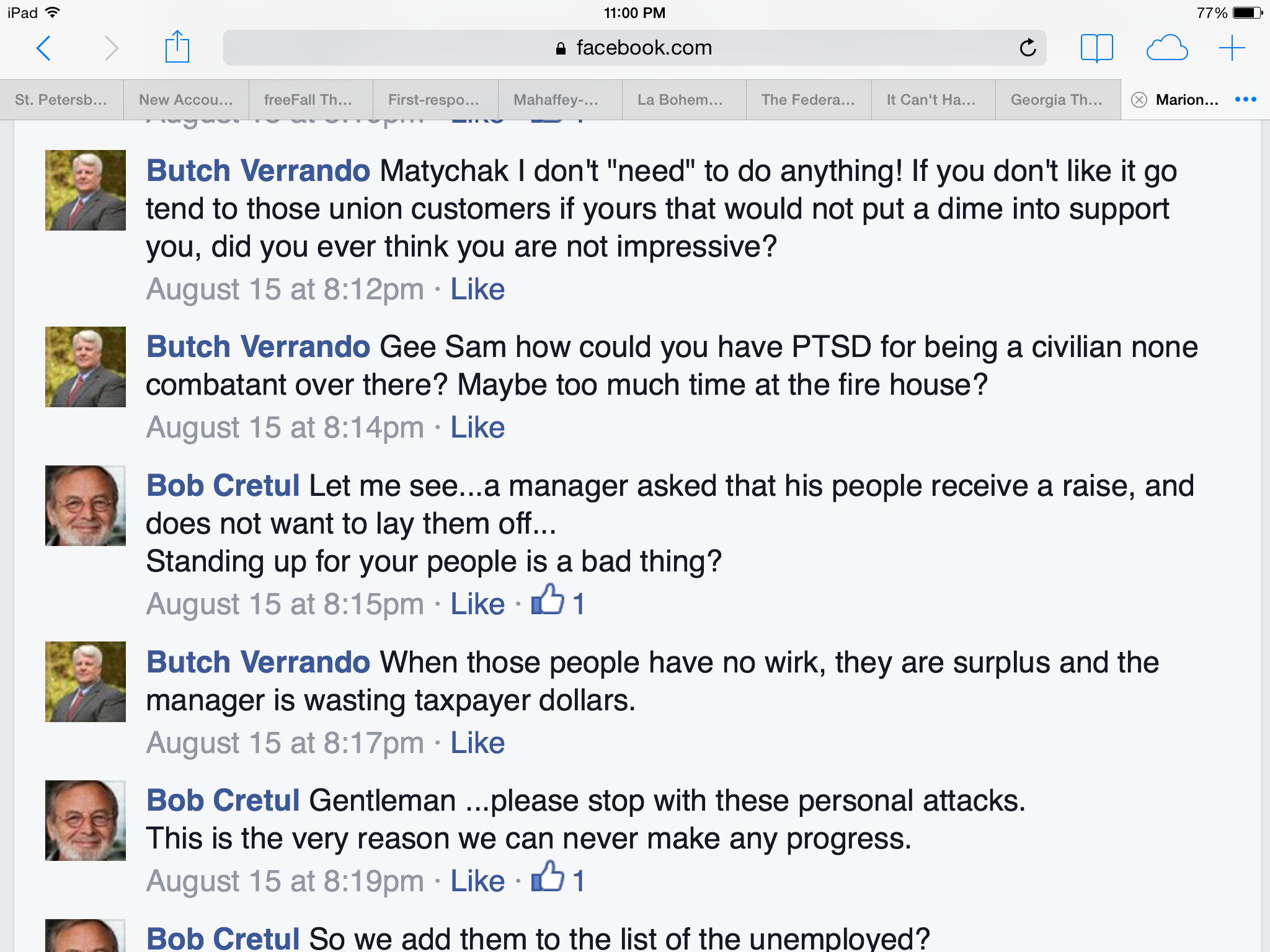 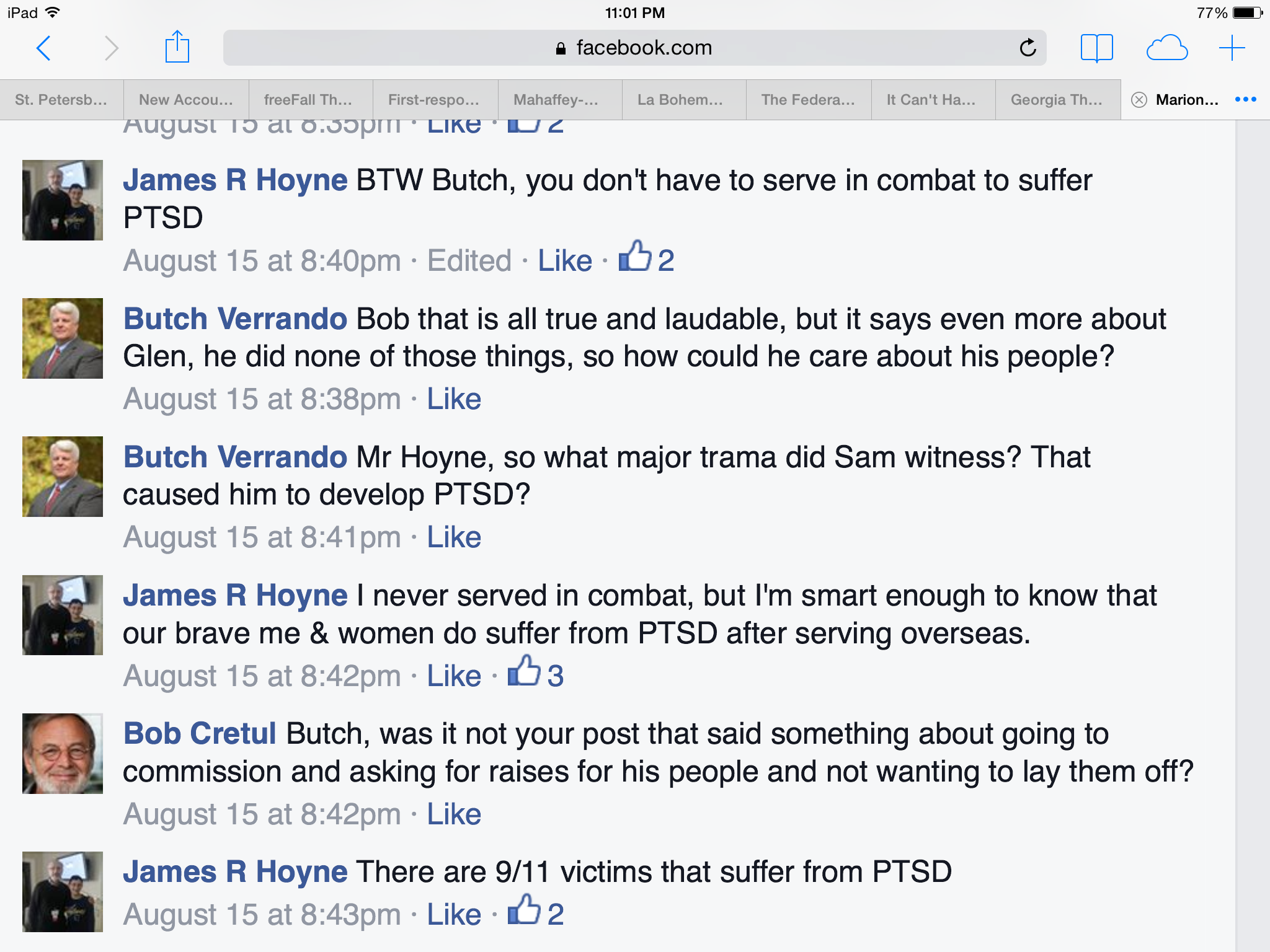 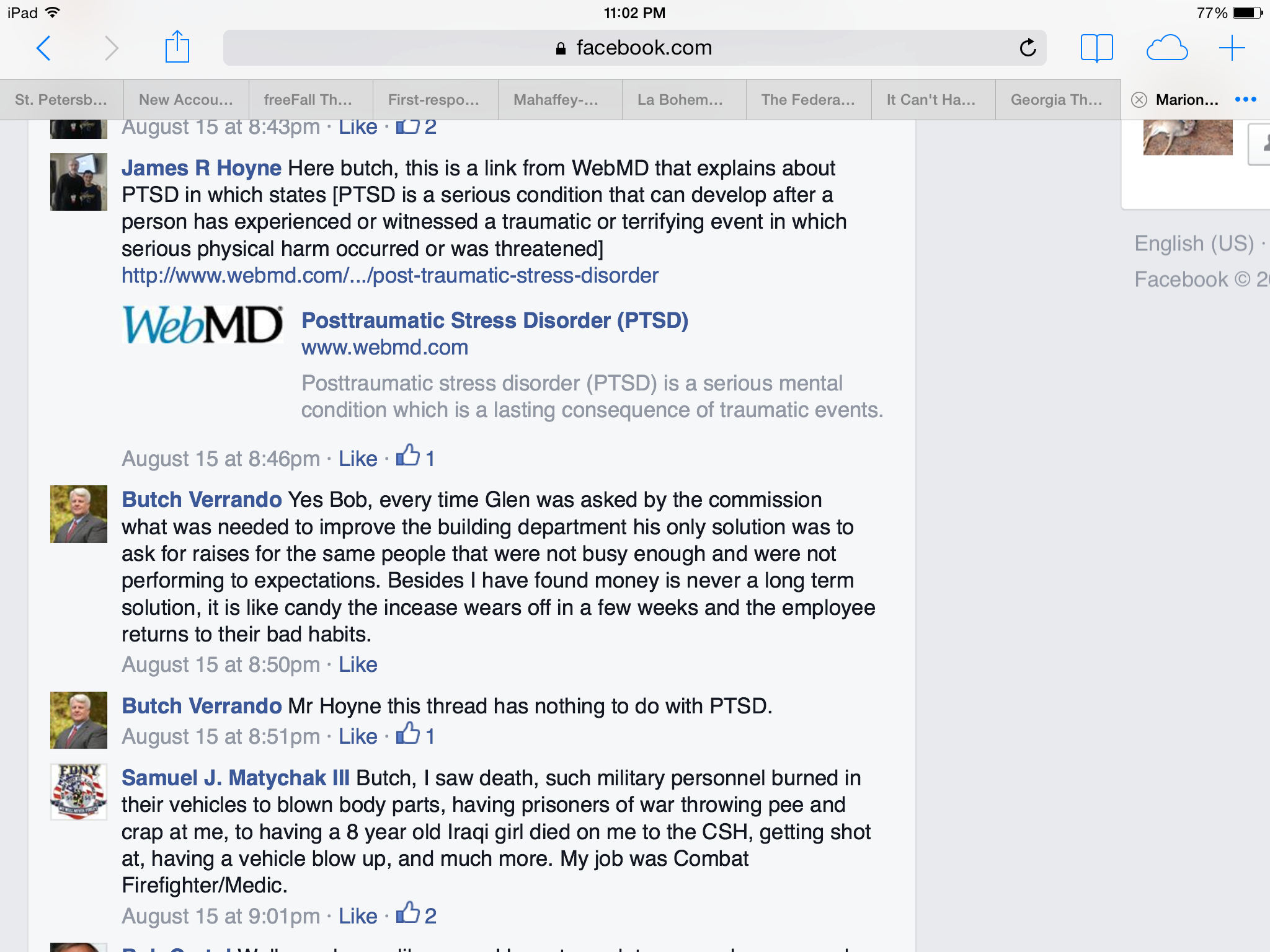 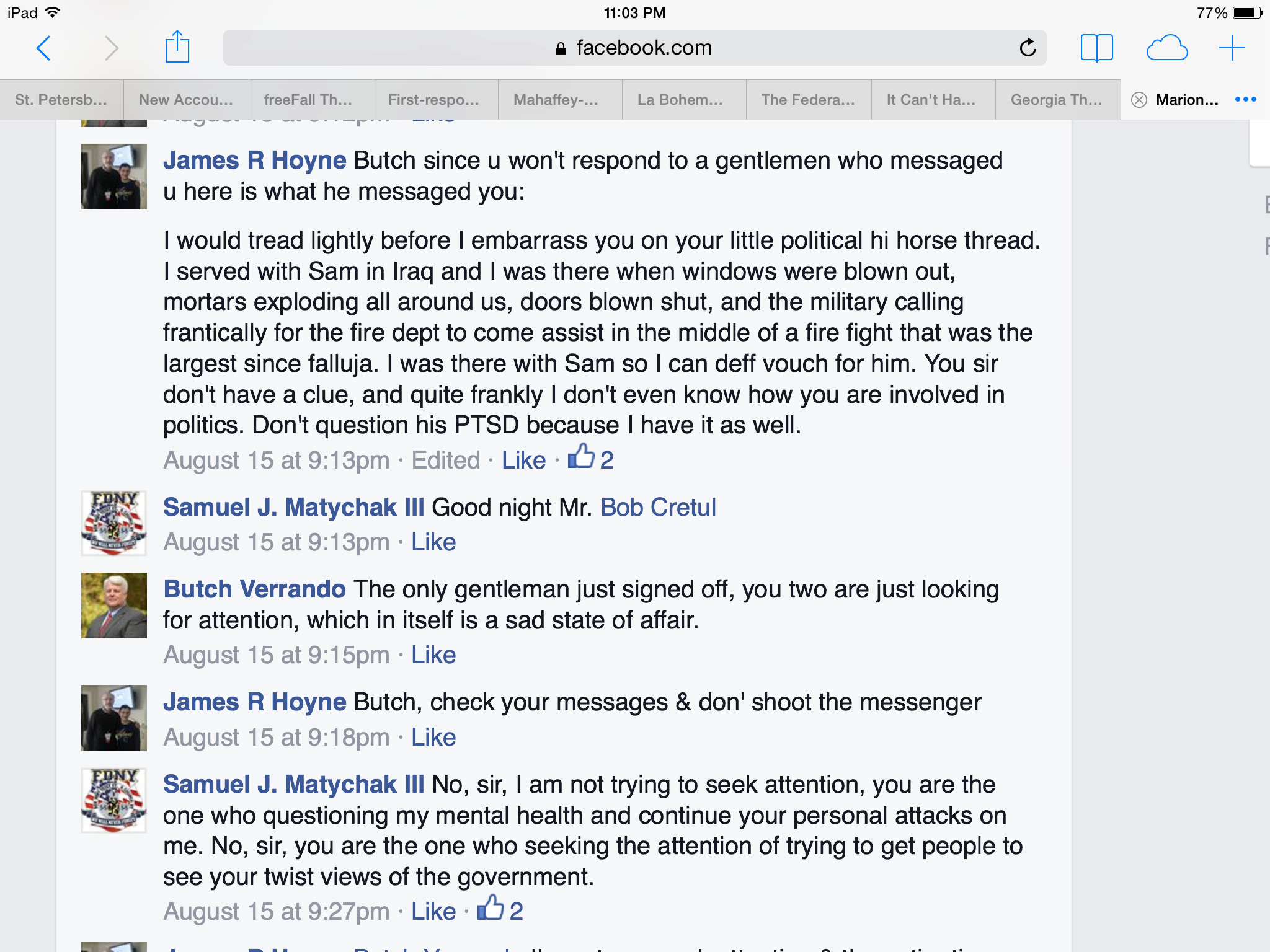 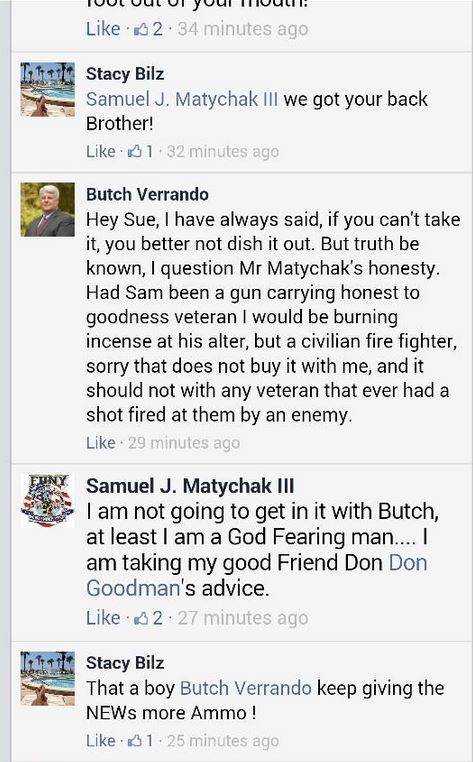