When the COVID-19 virus outbreak hit Florida and the public needed information, Jones said she was ready for action. As the geographic information systems (GIS) manager for the State of Florida Department of Health (DOH), she said she built the state’s COVID-19 Data and Surveillance Dashboard, an interactive website that provides key information on the virus, detailed down to the county level.

“I started from scratch and decided what I thought was important,” said Jones, a geospatial scientist who earned a dual bachelor’s degree in geography and journalism at Syracuse University. “I really wanted people to be able to quickly, easily, and clearly understand what the numbers are in our state.”

In an email to Ocala Post, Jones said that she was removed because she refused to falsify and censor data. She said she was ordered to censor data to support reopening the economy.

“The government wanted me to manually change data, and I refused,” said Jones.

The move was done quietly until Jones decided to speak up. Afterward, she was fired by the agency which is overseen by DeSantis.

Ironically, in late April, the Dashboard was touted by the White House as the most transparent and up to date information pertaining to COVID-19.

When the Dashboard was announced by Tallahassee officials, Gov. Ron DeSantis said it  was “the new face of Florida’s coronavirus response.”

DeSantis is now being accused of being involved in the data censoring. However, in a press conference, DeSantis said Jones’ termination is a non-issue.

Jones said she built the website and implemented every line of code all on her own. As far as functionality, scientists say the website was extraordinarily complex, received more than 44 million views and growing, and outperformed the failed Florida unemployment website by a landslide.

And while the unemployment website cost taxpayers more than $100 million to build, Jones, who was working 16 hours a day, said she was not compensated for the majority of her work.

In a warning to the public, Jones wrote, “I do not expect the new team to have the same level of accessibility or transparency.”

She said that because she was forthcoming and transparent with the data is the reason she was forcibly removed from the project.

“This change was not voluntary at all like the government would like the public to believe,” said Jones.

She said she refused to support certain agendas.

Led by Jones, Florida’s COVID-19 Survellience Dashboard was created by a team of highly educated Florida Department of Health data scientists and public health officers. Now, Jones said the Dashboard is in the hands of politicians and bureaucrats who have zero experience.

Fried wrote, “Thank you, Rebekah Jones, for not being afraid to speak out.”

Additionally, Fried wrote a letter to DeSantis and requested that Health Department officials appear before the Florida Cabinet to answer questions regarding the circumstances surrounding the handling of Jones’ termination. The Cabinet is scheduled to meet next week. 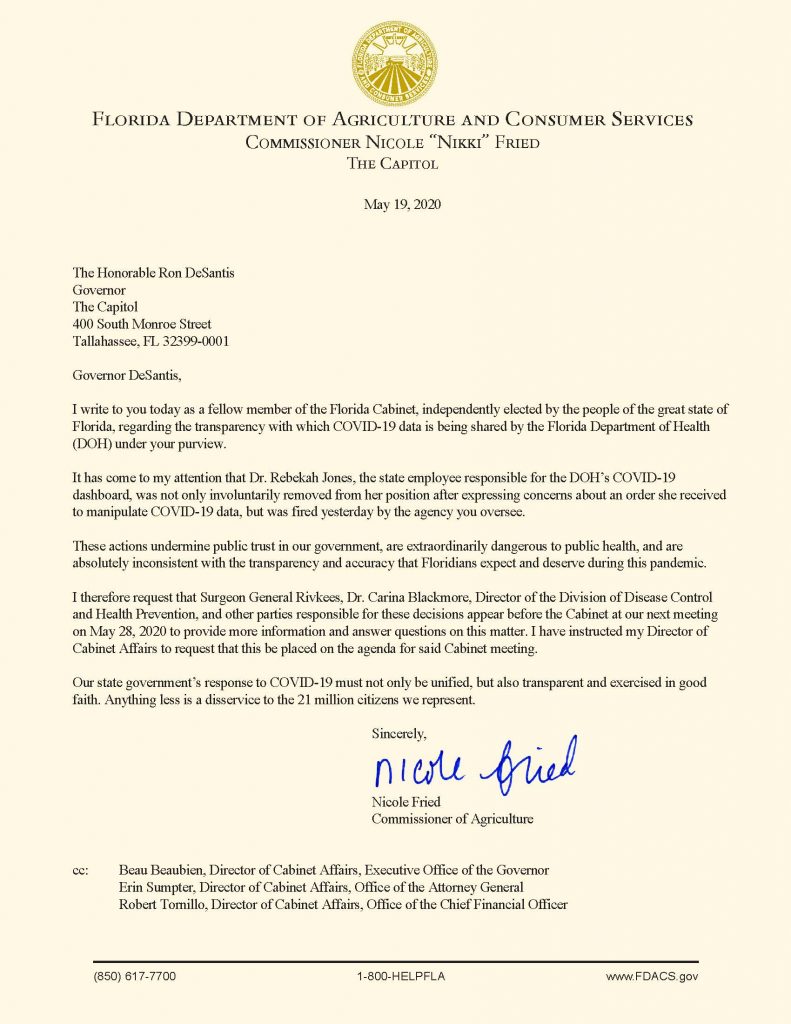 Health officials in Florida are now calling for a full investigation.

As for the COVID-19 Dashboard, Jones says that the information now being posted could be falsified. Jones said this was easy to see when data unexplainably went missing recently.

The public may have also noticed that since the website was confiscated on May 5, that the website has been slow and crashes from time-to-time.

Analysts called the takeover absurd and said that removing or cutting off certain data is the same as concealing a hurricane forecast knowing it will hit.

DeSantis, the White House, nor the DOH returned Ocala Post’s request for comment.