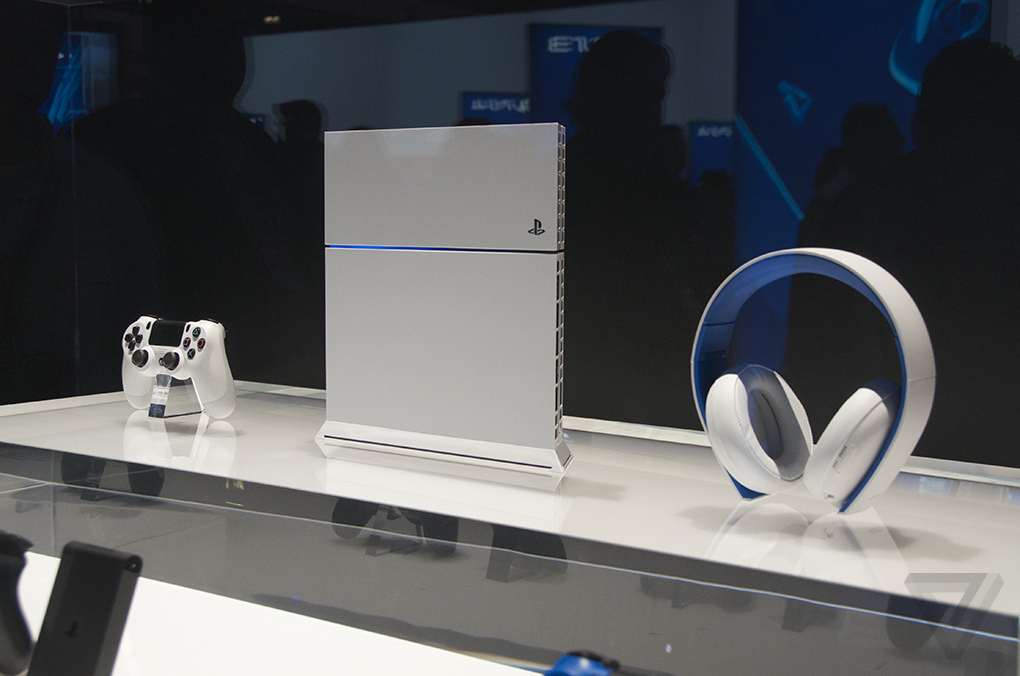 On September 9, gamers will be able to pick up the PlayStation 4 Destiny Bundle, which will pack in a white or “Glacier-White” PS4 (with the same specs as the original model, including the 500 GB hard drive), a white controller, a copy of Destiny, and 30 days of PlayStation Plus membership, which includes online multiplayer as well access to free games on the PlayStation Store. The price of the Destiny bundle is expected to go for at least $449 including a “Glacier-White” controller.

Late Tuesday, Nintendo executives battled using a forthcoming version of the “Super Smash Bros.” game. Revealed during the demonstration was the inclusion of Pac-Man as a character in the game. Pac-Man will be chomping away and firing fruits starting Oct. 3 on the Nintendo 3DS, and sometime this holiday season in high definition on the Wii U.

Lady Palutena, the goddess of light from the ages-old Kid Icarus series, will also be among the new character choices on the game.

Bringing the cult favorites to Super Smash Bros. serves as another nudge for Nintendo fans holding older consoles to upgrade to the Wii U, which has seen weak interest since launching in fall 2012.

You may have noticed the seventh version of the “Assassin’s Creed” series, “Unity,” feature doesn’t feature any female assassins.

According to developers, it was too much extra production work to include women.

Media outlets prompted the latest round of criticism of the video game industry for underrepresentation of women in games or its portrayal of women when they do appear.

“Unity,” designed by Ubisoft, features a main character working with assassins “to expose the true powers behind” the 18th century French Revolution. The game is being heralded this week for including a cooperative multiplayer mode for the first time. The game launches October 28, 2014 for PlayStation 4, Xbox One and Windows computers.

“It’s double the animations, it’s double the voices, all that stuff and double the visual assets,” Amancio said. “Especially because we have customizable assassins. It was really a lot of extra production work.”

Ubisoft technical director James Therien told VideoGamer.com that a female character was dropped from the feature list to focus on making the best experience possible.

“And I mean it’s something the team really wanted, but we had to make a decision,” Therein said. “It’s unfortunate, but it’s a reality of game development.”

Gamespot noted that an Ubisoft official had earlier said, referring to a prior “Assassin’s Creed” version, that a heroine was not included because “the history of the American Revolution is the history of men.”

Some analysts and members of the video-gaming media are calling Sony the “winner” of E3 for pushing forward with plans to build a PlayStation ecosystem that involves access to the same games and content across the house on all types of devices.

In an extended interview with Edge-Online this week, Sony’s Andrew House explained how the company was adjusting marketing for the PlayStation Vita, which has faced a “challenging” environment outside of Japan.

A recent PricewaterhouseCoopers report on the industry said Vita sales saw an uptick when the PlayStation 4 was released last fall, but that “Sony’s dedicated portable consoles continue to struggle against both Nintendo and Smartphone and tablet gaming.” And even then, Nintendo has had to slash sales forecasts for its 3DS portable gaming device.

House, the chief executive of Sony Computer Entertainment, acknowledged that the Vita is more of an extender for the PlayStation 4 than a gaming device on its own. People can use the Vita when someone else wants to use the big television screen, he said. It’s a similar positioning for the Nintendo Wii U, whose controller has a screen that can be used for gaming when the television screen is tuned in elsewhere.

But House also said Sony has had success persuading mobile app developers to build games for the Vita.

“It’s becoming a very accessible and easy onramp for independent developers, those who have had some success in the mobile space and now want to work on games that are that little bit richer, that have a more dedicated gaming interface,” he said. “And we’re certainly seeing Vita being embraced by that community very strongly.”