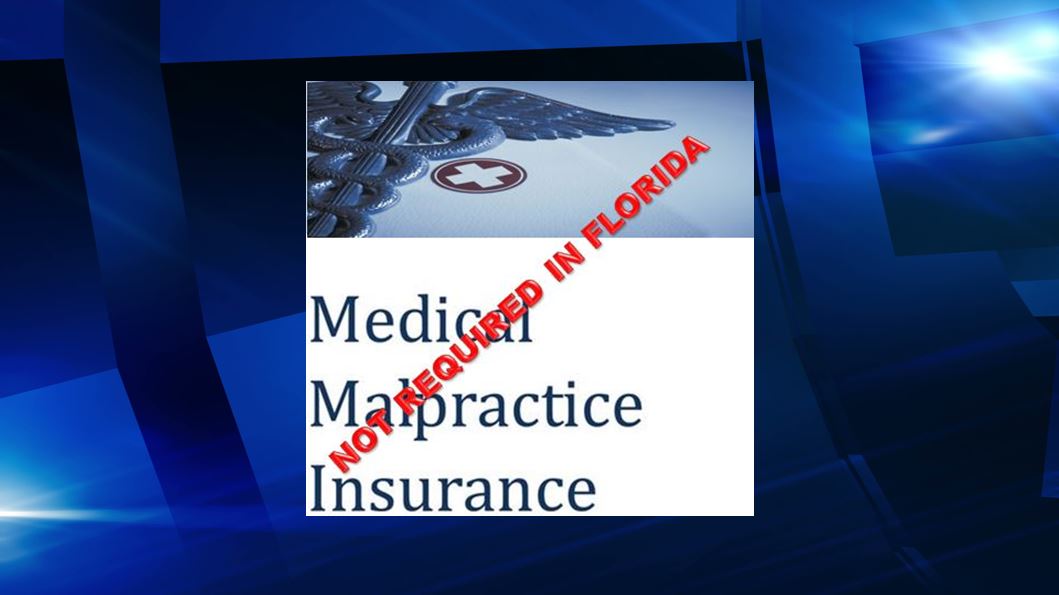 Recent e-mails about the legality of doctors operating without malpractice insurance in Ocala, sparked an investigation by Ocala Post. What Ocala Post found might surprise you.

There is a law in Florida (458.320, F.S.) that states doctors must carry $100,000 in malpractice insurance in order to practice medicine at all, and in order to have hospital staff privileges (they see patients in hospitals and not just in their offices) they must have at least $250,000 in malpractice insurance. As an alternative to having an actual malpractice insurance policy, Florida law also allows doctors to use other types of pre-arranged secured assets to cover claims in these amounts, like trust accounts, bank letters of credit, and similar arrangements. There is nothing inherently wrong with these other types of security, but they are rarely used.

Unfortunately, these amounts of insurance are often woefully inadequate to pay the actual damages in medical negligence claims. What good is a $250,000 malpractice policy if the patient’s injuries result in medical bills of $600,000? What about wage losses and other damages? And the $250,000 is gross, not net after paying for expenses and attorney fees to collect the money. Fortunately, some doctors and virtually all hospitals carry insurance policies in larger amounts.

But hold on, the law also has a loophole that does not require doctors to carry insurance at all.

According to the loophole, in Florida, if your doctor practices without insurance, he or she should have a sign posted in a conspicuous place, which advises patients to that fact. Unfortunately, many times, it is not posted. But what will you do, sue them? According to the McMillen Law Firm, you would have a difficult time of collecting, since the doctor has no insurance.

If a hospital is involved in a patient’s injury, they might actually be able to sue the hospital for allowing the doctor to practice without the required insurance or assets.

Many doctors hold title to their assets in ways to make it difficult to collect a judgment from them personally. CPAs routinely give seminars to doctors with names like “How to Protect Your Assets From the Trial Lawyers.” They never give those seminars more appropriate names, like “How to Commit Malpractice, Cause Enormous Pain and Financial Injury to Your Patients and their Families, Yet Escape Any Responsibility to Them.” And CPAs most always instruct their clients to become a LLC (Limited Liability Corporation).

The law firm says individuals should certainly think twice about knowingly going to a doctor who does not carry malpractice insurance.

Legislation passed in 2013 by Governor Rick Scott, makes suing a doctor almost impossible. Florida’s Malpractice Act requires that an injured patient must first obtain a sworn affidavit from a doctor to even initiate a claim, which can be a very expensive and difficult barrier to cross for any lawyers who sue doctors in Florida. Most doctors are afraid and reluctant to testify against another doctor who practices in their community and medical specialty. A major radical change contained in the bill permits a defendant doctor’s or hospital’s lawyers to request a meeting with a plaintiff’s treating physician — initially with the patient’s attorney present, but after 15 days without the lawyer, to discuss the claimants’ medical records, diagnosis, and prognosis, and even recommend a defense lawyer. This means that a medical malpractice defense lawyer will be able to confer with a treating doctor and discuss the confidential medical history of a patient as well as the defense’s strategy,which invades the doctor-patient relationship and has significant potential to influence the testimony and opinions that a treating physician may have in a particular case. Reasons like this is why many attorneys today will not even accept malpractice claims.

A good doctor wants to have malpractice insurance for two reasons. First, it pays for a lawyer if the doctor ever needs one to fight a claim that is believed to be without merit. But most importantly, if the doctor does make a mistake, the insurance is there to help the patient who has been unintentionally injured.

The law firm said if the doctor is a decent human being, he or she knows they can actually make a mistake, and care enough about patients to want them compensated if something goes wrong.

The McMillen Law Firm said, “There is something discomforting about any doctor who feels adversarial enough toward his patients that he is even willing to post a sign in his office advising to them that they can’t get any money from him if he hurts them.”

According to the law firm, if a doctor does post a sign, it might be that the doctor has had so many prior claims, the physician simply cannot afford to buy insurance because the insurance premiums got too high, or no insurance company is willing to underwrite for that doctor.

The law firm said that should worry you as a patient.

Out of 10 doctors interviewed by Ocala Post, three of them did not have malpractice insurance. Out of the three, one did not have a sign posted. Because none of the physicians had any prior claims against them, Ocala Post will not name the doctors.