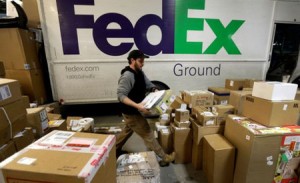 According to the indictment, from at least as early as 2004, DEA, FDA and members of Congress and their staff informed FedEx that illegal Internet pharmacies were using its shipping services to distribute controlled substances and prescription drugs in violation of the Controlled Substances Act (CSA), Food, Drug and Cosmetic Act (FDCA), and numerous state laws. In 2004, FedEx established an Online Pharmacy Credit Policy requiring that all online pharmacy shippers be approved by the Credit Department prior to opening a new account. The stated reason for this policy was that many Internet pharmacies operated outside federal and state regulations over the sale of controlled drugs and many sites had been shut down by the government without warning, leaving a large balance owed to FedEx. According to the indictment, FedEx also established a Sales policy in which all online pharmacies were assigned to a “catchall” classification to protect the commission-based compensation of its sales professionals from the volatility caused by online pharmacies moving shipping locations often to avoid detection by the DEA.

As early as 2004, FedEx knew that it was delivering drugs to dealers and addicts. FedEx’s couriers in Kentucky, Tennessee, and Virginia expressed safety concerns that were circulated to FedEx Senior management, including that FedEx trucks were stopped on the road by online pharmacy customers demanding packages of pills, that the delivery address was a parking lot, school, or vacant home where several car loads of people were waiting for the FedEx driver to arrive with their drugs, that customers were jumping on the FedEx trucks and demanding online pharmacy packages, and that FedEx drivers were threatened if they insisted on delivering packages to the addresses instead of giving the packages to customers who demanded them. In response to these concerns, FedEx adopted a procedure whereby Internet pharmacy packages from problematic shippers were held for pick up at specific stations, rather than delivered to the recipient’s address.

FedEx is charged in the indictment with conspiring with two separate but related Internet pharmacy organizations: the Chhabra-Smoley Organization, from 2000 through 2008, and Superior Drugs, from 2002 through 2010. In each case, FedEx is alleged to have knowingly and intentionally conspired to distribute controlled substances and prescription drugs, including Phendimetrazine (Schedule III); Ambien, Phentermine, Diazepam, and Alprazolam (Schedule IV), to customers who had no legitimate medical need for them based on invalid prescriptions issued by doctors who were acting outside the usual course of professional practice. The indictment charges that FedEx conspired with these organizations to violate the CSA, 21 U.S.C. §§ 841, 846, and the FDCA, 21 U.S.C. §§ 331, et seq.

FedEx began delivering controlled substances and prescription drugs for Superior Drugs in 2002. FedEx’s employees knew that Superior Drugs filled orders for online pharmacies that sold controlled substances and prescription drugs to consumers without the need for a face-to-face meeting with, or physical examination or laboratory tests by, a physician.

According to the indictment, FedEx’s employees knew that online pharmacies and fulfillment pharmacies affiliated with both the Chhabra-Smoley organization and Superior Drugs were closed down by state and federal law enforcement agencies and that their owners, operators, pharmacists, and doctors were indicted, arrested and convicted of illegally distributing drugs. Nevertheless, FedEx continued to deliver controlled substances and prescription drugs for the Chhabra-Smoley organization and Superior Drugs.

“The advent of Internet pharmacies allowed the cheap and easy distribution of massive amounts of illegal prescription drugs to every corner of the United States, while allowing perpetrators to conceal their identities through the anonymity the Internet provides,” said U.S. Attorney Melinda Haag. “This indictment highlights the importance of holding corporations that knowingly enable illegal activity responsible for their role in aiding criminal behavior.”

“Illegal Internet pharmacies rely on illicit Internet shipping and distribution practices. Without intermediaries, the online pharmacies that sell counterfeit and other illegal drugs are limited in the harm they can do to consumers,” said Philip J. Walsky, Acting Director, FDA’s Office of Criminal Investigations. “The FDA is hopeful that today’s action will continue to reinforce the message that the public’s health takes priority over a company’s profits.”

FedEx is innocent of the charges brought today by the Department of Justice. We will plead not guilty. We will defend against this attack on the integrity and good name of FedEx and its employees.

FedEx has a 42-year history of close cooperation with law enforcement agencies. We’re proud to say that we have partnered with the FBI, the Department of Homeland Security, DEA, and other federal, state and local law enforcement teams around the world to help stop illegal drug activity and bring criminals to justice. These efforts include providing assistance to the DEA in combatting rogue internet pharmacies. We have repeatedly requested that the government provide us a list of online pharmacies engaging in illegal activity. Whenever DEA provides us a list of pharmacies engaging in illegal activity, we will turn off shipping for those companies immediately. So far the government has declined to provide such a list.

FedEx transports more than 10 million packages a day. The privacy of our customers is essential to the core of our business. This privacy is now at risk, based on the charges by the Department of Justice related to the transportation of prescription medications.

We want to be clear what’s at stake here: the government is suggesting that FedEx assume criminal responsibility for the legality of the contents of the millions of packages that we pick up and deliver every day. We are a transportation company – we are not law enforcement. We have no interest in violating the privacy of our customers. We continue to stand ready and willing to support and assist law enforcement. We cannot, however, do the job of law enforcement ourselves.

Investors say they fully support FedEx and believe that the DEA has overstepped its boundaries. Since the announcement of the indictment, FedEx stock has risen by .02 percent.

FedEx has been summoned to appear in federal court in San Francisco on July 29, 2014.