The project would be a mixture of single-family, multi-family, and commercial development. There are also plans for some of the land to be used as recreational.

Red Oak and Ocala Stud, both owned by developer John J. Brunetti, would be the farms developed; taking away from the historic feel of Southwest 27th Avenue.

Bernick, along with most neighboring farm owners and the President of Trinity Catholic High School have been greatly opposed to the project since it was introduced.

Ocala Mayor Kent Guinn and Councilman Jim Hilty are also opposed to the project. In March of 2014, Guinn said, “The land use is not compatible for the surroundings of the area.”

Councilman John McLeod has been a driving force for the project. Ocala Post attempted to examine McLeod’s campaign contributions to see if he had previously accepted contributions from Brunetti ; however, the contribution list was missing from Voter Focus records. Ocala Post is currently awaiting a response from the Marion County Supervisor of Elections on a formal public records request for a list of McLeod’s contributions.

Gray said that Bernick’s request of one home per one-acre lot was not realistic.

Residents said they felt Gray was insinuating that Ocala residents are poor, and could not afford houses on one-acre lots.

Gray said one house per one-acre lot would not sell in Ocala. Instead, they are attempting to squeeze in as many houses as possible on one lot. Gray claims they are merely building a development that would sell.

When all is said and done, the project has the potential of creating more than 3,000 homes and 925,000 square feet of commercial and office space.

In closing up his argument to the city council Gray said, “I’d like to make one more point.”

Gray said he wanted to point out that more than two million dollars in fair-share payments would be made to the county. He went on to say that if the county reinstated the transportation impact fees of $6,500 per home, [that] would bring an additional estimated revenue of $12 million to the county.

“I am just passing that along,” Gray said. “And I think this is the biggest project that has ever been presented to the city for approval.”

Ocala resident, John Strauss said, “The meeting was a joke. The City Council, Brunetti, and the rest of his ‘goons’ should be ashamed of themselves. Ocala used to be the fifth best place to live in the Nation, but it is despicable acts like this committed by City Council and County Commissioners that have destroyed this town.” He asked, “What is the point of a meeting if council members do what they want anyway?

“It is clearly about money,” said Strauss. “Corruption in this once small town is getting worse by the minute. Before you know it, we will be living in an Orlando, Florida type environment (Meaning Orlando is listed as the second most dangerous city in Florida).”

Rick George wrote, “The City Council just sold its soul to the Devil. Not preserving Ocala’s history and agreeing to Brunetti’s plan is for the money only.”

Residents are concerned over the impact the project would have on the county’s water supply. Residents are equally concerned about how already crowded schools would handle a surge of children and the ability for law enforcement to keep up with the crime rate should it rise. 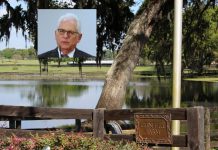