According to MCFR, when units arrived, crew members found that a vehicle was fully engulfed in flames.

MCFR said that crews were able to extinguish the fire quickly. Additionally, crew members were able to salvage some of the family’s belongings.

One lane was closed until the vehicle could be moved.

The driver and passenger were able to escape the vehicle without injury.

The cause of the fire is under investigation. 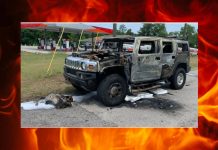