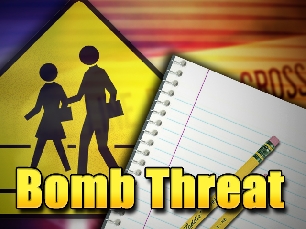 Ocala, Florida –Today, February 28, 2014, while serving as the School Resource Officer at Silver River Mentoring and Institution (SRMI), Officer Green with the Ocala Police Department was notified by the school’s Executive Director, Mike Nebesnyk, in reference to a note found on the hallway floor during bus offloads.

The note indicated that there was a bomb on a bus.

The note read (as it was worded), “There a bomb on one of these buses and if not found it will go off in 20 minutes and you will die.”

The school was placed on lockdown, and all of the buses were relocated to Shocker Park, which is located across the street from the school.

Officer Green notified OPD Communications and additional units were dispatched to the scene. The Marion County Sheriff’s Office K-9 Bomb Detection Unit was also called in to work the scene.

School Dean Greg Vandeventer, pulled surveillance videos from the school and was able to identify David Doughty, 13, of Ocala. Doughty stated that he gave a piece of paper to another student, Christopher Carter, 14, to write the note.

Security footage from Doughty’s bus showed [him] giving a piece of paper and a colored pencil to Carter. Carter then used a binder belonging to Jeremi Jensen, 13, to write the note; Jensen and Carter were sharing a seat on the bus.

Surveillance footage showed Carter, Jensen and Doughty reading the note, then discussing where to drop it.

The trio then passed the note to Tavares Bokyin, 14, before getting off the bus. Boykin dropped the note on the floor as he entered the building.

The buses were searched and cleared, but the school halted, breakfast was delayed, the off campus trip was canceled and all activity at the school ceased as a result of the actions of the four boys.

Doughty, Carter, Jensen and Boykin were all arrested and transported to the Marion County Sheriff’s Office Juvenile Processing center where they will be charged as felons.