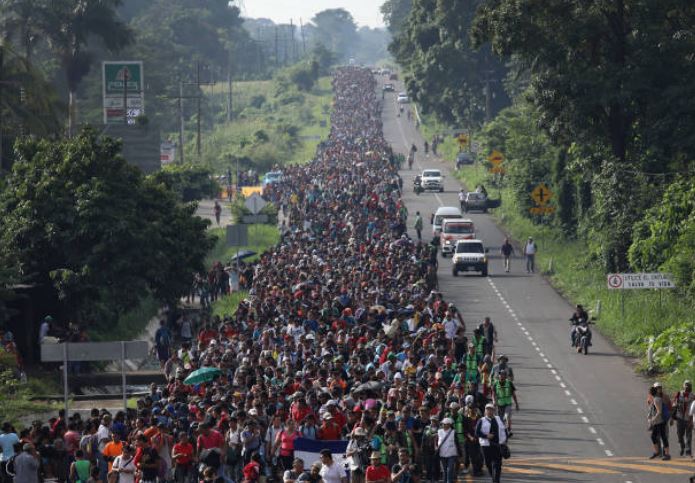 Deputy Chief of Border Patrol, Raul Ortiz, says that since Joe Biden took office there has been a massive increase in how many illegal immigrants have attempted to cross the border illegally.

ICE has also expressed their anger at how Biden plans to allow illegals in the country with little to no screening. Biden also ordered a halt on deportations and arrests of illegal immigrants.

According to ICE, the policy change means officers can no longer seek deportations for immigrants arrested for drunk driving, assault, fraud, drug offenses, theft, and many others.  ICE says the new policy will weaken ICE’s ability to arrest wanted immigrants at correctional facilities.

In 2020, Homan says more than 90 percent of illegal immigrants who were captured and arrested had criminal records. He said the nonsense spoken by those on the left who say most illegals do not have criminal records is completely inaccurate.

ICE wrote, “ICE ERO conducted 185,884 removals during FY 2020, a 30 percent decrease from FY 2019. This decrease primarily resulted from a sharp decline in CBP apprehensions at the Southwest Border due to the use of authority under 42 U.S.C. §§ 265 and 268 to expel aliens from the United States to prevent the introduction of COVID19, though it was also impacted by a decline in ICE ERO interior arrests. The vast majority of ICE ERO’s interior removals – 92 percent – had criminal convictions or pending criminal charges, demonstrating ICE ERO’s commitment to removing those who pose the greatest risk to the safety and security of the United States. Additionally, despite the overall decrease in removals, ICE ERO assisted CBP with 17,000 air charter expulsions under Title 42, and also saw increases in removals to several countries that were previously uncooperative with removal efforts.”

Homan says that Biden has now undone everything former President Donald Trump put in place and law-abiding citizens are going to pay the price. He says the numbers do not lie and the new administration is not relying on facts.

On Friday, February 12, the Biden administration announced plans for tens of thousands of illegal immigrants waiting in Mexico to be allowed into the United States.

On February 19, Biden says the first 25,000 of hundreds of thousands of illegal immigrants will be allowed in the U.S. They plan to start slowly with two border crossings each allowing up to 300 people per day to cross the border. Officials refused to name where the entry points will be located out of fear that thousands more will overrun the entry point.

Homan says Biden has been putting America last his entire political career and in just his few short weeks a president has shown that Americans come last.

He said so far Biden has eliminated tens of thousands of jobs and plans to give billions of dollars to foreign governments.

Biden’s plan to give billions to foreign governments has been written into the COVID-19 stimulus package.

Homan says that the Biden Administration has preached transparency but has been everything but transparent.

Officials said, “They’ve abolished ICE without abolishing ICE .” Adding, “Crime is going to skyrocket. This is not fear tactics, it is an absolute certainty.”

Officials said none of this makes any sense.

“Biden suggested Florida be restricted for travel but then opens the borders to illegals,” said Gov. Ron DeSantis. “This is a political attack on Florida.”

Biden, Nancy Pelosi, AOC, and the rest of the “squad” have been labeled as hypocrites after allowing a fence and the National Guard to surround the Capitol, but remove border protections for the rest of Americans in the U.S while preaching gun control.

Texas filed a lawsuit against the Biden administration when they first ordered arrests and deportations to halt.