Belleview, Florida  — In a town filled with crime and government corruption, Marion County citizens were ecstatic to see people work together to try and save an abandoned puppy that was near death.

On Saturday, at approximately 8 a.m., Eric Pedersen was mowing a customer’s lawn. As he made his way to the backyard to do the weed eating around a shed, he saw something twitch. When he looked closer, he realized it was a puppy, which was later named Chance.

“He blended in so well with the background and the dirt I would have never noticed him if he didn’t twitch,” Eric said.

Lawn maintenance supervisor Sean Baron walked over to take a look and snapped a photo of the severely emaciated dog.

Social media rumors quickly began to spread, some posting comments on Facebook blaming the homeowner. However, Melissa Pedersen told Ocala Post that the homeowner has medical issues and does not go outside without assistance.

“[The homeowner] had no idea the puppy was there,” Melissa said.

Melissa said that Eric and Sean did not know what to do, so, they contacted her. That is when she posted it in on the page of an Ocala Facebook group.

Melissa said, “I needed feedback and I figured [Ocala’s Word of Mouth] would give me the feedback I needed.” And she was proved correct.

Melissa was unable to take the dog herself because she has two small children at home.

The community quickly came together and began making suggestions. In just a short period of time, there were hundreds of comments from people showing support and pledging to donate money for the puppy.

UF Animal Hospital in Gainesville told Melissa that she could bring the dog in to be seen, but she wanted something closer. The local UF emergency veterinarian suggested animal control.

Melissa did not call animal control because she was afraid they would euthanize Chance.

A short time later, Marion County resident Misty Thompson commented on the Facebook post and offered to pick up the puppy and take him to an animal hospital.

Thompson, along with resident Stephanie James, rescued the puppy and took it to Belleview Veterinary Hospital, located at 10725 SE 36th Ave, Belleview, where they immediately began treating Chance.

Even though Dr. Cara Erwin-Oliver showed compassion and did not turn away services for Chance, donations began to pour in for the puppy’s treatment.

In three hours, more than $3,000 was collected for Chance. The donations came in via a GoFundMe page and many were called in directly to the animal hospital. Some of the donations came from as far away as New Zealand.

When Chance arrived at the animal hospital he was severely emaciated, anemic, and could not stand on his own.

After a few hours of aggressive treatment and care, Chance was able to stand for a few moments on his own but was still weak.

Facebook comments showed how supportive the community is, and how they had come together in just a few hours to save Chance’s life.

“My eyes are filled with tears reading all the kind words of encouragement for this poor baby “Chance”. I can tell u first hand he’s a fighter. I pray he pulls thru. As of late afternoon, he is steadily improving.  Actually stood on his own and drank a few sips of water from a bowl without being offered from a syringe. I’m encouraged and I truly feel that with the prayers and support of our community he has a chance of a secure future. He is still in a fragile state but improving slowly. We will update his condition tomorrow. Keep him in your thoughts and prayers,” Dr. Cara Oliver posted on Facebook.

At the end of the day Saturday, Chance seemed to be making progress. Ocala Post had even scheduled an interview with the doctor.

“With a heavy heart I want to let everyone who has been following Chance’s rescue know, that early this afternoon Chance crossed the rainbow bridge. He was receiving his afternoon therapy and passed in peace….. In only a few hours (less than 24) he has touched thousands of people’s lives and brought true awareness to the unspoken needs of our fury members of our community. Animal neglect is a true crime that in the pet health industry we are exposed to daily. We at BVH are saddened by Chances passing but hope his short time with us gave him a sense of love and compassion that was felt by him for the first time. His life was short but I believe it will make a future difference for others in his condition.”

Debbie Leischner wrote, “Such a sad outcome. I’m so glad he was not alone in his passing. I just wish he could’ve made it long enough to understand what a loving home felt like day in and out. At least he got to feel it for a day.”

Melissa said that the proper authorities have been notified.

The circumstances as to how Chance came to be at the home are unknown. 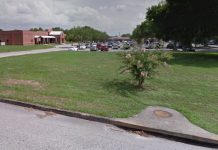