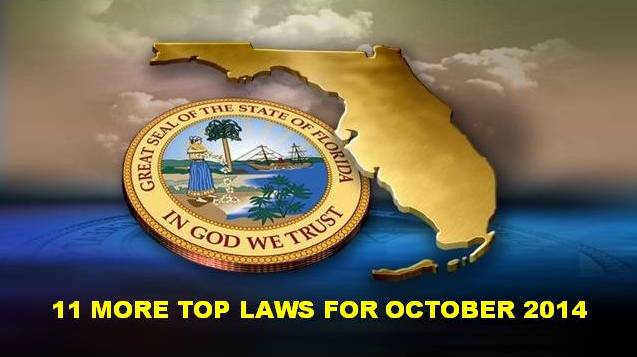 Eleven more top laws for October 1, 2014. Some of the laws cover juvenile justice, concealed weapons, elected officers, and many other need to know topics.

Some of these might affect you, your children, or help you as a citizen understand your rights.

The bill deletes the requirement that a person use deception or intimidation to obtain or use a vulnerable adult’s funds, assets, or property in committing identity theft. The bill specifies that “unauthorized appropriation” occurs when a vulnerable adult does not receive reasonably equivalent financial value in goods or services or when fiduciaries violate specified duties.

The bill amends s. 825.103(1), F.S., to create additional instances that constitute exploitation of a vulnerable adult including the misappropriation, misuse or transfer without authorization of monies belonging to a vulnerable adult by a caregiver or a person who stands in a position of trust and confidence with the vulnerable adult.

An Identity Theft and Fraud Grant Program is created within the Department of Law Enforcement to award grants to support local law enforcement agencies in the investigation and enforcement of personal identification information theft and fraud.

Computer crimes: The bill recognizes that advancements in technology have led to an increase in the number and reach of computer related crimes. CS/CS/CS/HB 641 addresses this increase in computer crimes by expanding the application of various existing statutes addressing computer-related crimes to include electronic devices and creating additional offenses. The bill expands the entities that can bring a civil action against persons convicted of computer-related offenses and provides for exceptions to computer-related offenses for persons who act pursuant to a search warrant, an exception to a search warrant, within the scope of lawful employment or who perform authorized security operations of a government or business.

Three crimes are added to “offenses against users of computer networks and electronic devices” including:

“Offenses against public utilities” are created in the bill and two additional crimes are created, including:

In recent years, defendants have been convicted of aggravated assault for threatening to use force (e.g., displaying a firearm, firing a “warning shot,” etc.) and sentenced to mandatory minimum terms of imprisonment pursuant to the 10-20-Life law. In some cases the defendant unsuccessfully argued self-defense at an immunity hearing or trial, or both. This bill provides an exception for sentencing aggravated assault cases outside the 10-20-Life minimum mandatory terms of imprisonment if the court makes specified written findings.

The bill provides a process for a person charged with a criminal offense but found to have acted in lawful self-defense to apply to the court to expunge the record.

The bill further clarifies that the person using self-defense as set forth in ch. 776, F.S., should not be engaged in a criminal activity at the time.

The bill also reorganizes the self-defense provisions in ch. 776, F.S.

Protection of public defenders: The bill expands an existing public records exemption for certain personal identification and location information of current and former public defenders, of current and former criminal conflict and civil regional counsel, and of the spouses and children of such defenders and counsel. This bill provides that the exemption also protects the names of such spouses and children.

The bill contains a statement of public necessity as required by the Florida Constitution.

Traveling across county lines to commit a felony: The bill creates s. 843.22, F.S., which provides that if a person who commits a burglary travels any distance with the intent to commit the burglary in a county in this state other than the person’s county of residence, the degree of the burglary shall be reclassified to the next higher degree if the purpose of the person’s travel is to thwart law enforcement attempts to track the items stolen in the burglary.

The bill amends s. 903.046(2)(l), F.S., to prohibit those charged with traveling across county lines with the intent to commit a burglary that is reclassified under s. 843.22, F.S., from being released on bail until first appearance to ensure the full participation of the prosecutor and the protection of the public. The bill makes the crossing of a county line with the intent to commit a reclassified burglary a factor to be considered by the court when making a bail determination.

Real estate agents and property owners (Subsurface rights): The bill (Chapter 2014-34, L.O.F.) requires sellers of residential property to provide prospective purchasers with a disclosure summary at or before the execution of the contract for sale if any of the subsurface rights or right of entry are or will be severed or retained by the seller.

The bill defines “subsurface rights” as the rights to all minerals, mineral fuels, and other resources, including but not limited to, oil, gas, coal, oil shale, uranium, metals, and phosphate, whether or not it may be mixed with any other substance, found, or located beneath the surface of the earth.

The bill defines “seller” as a seller of real property which, at the time of sale, is zoned for residential use and where a new dwelling is being constructed, is to be constructed, or has been constructed since the last transfer of property.

Food stamp fraud (Public assistance): The bill makes it a third degree felony if the value of the public assistance fraud or identification wrongfully received, retained, misappropriated, sought, or used is of an aggregate value of $200 or more but less than $20,000 in any 12 consecutive months.

The bill requires the Department of Children and Families (DCF) or the director of DCF’s Office of Public Benefits Integrity, to pay a reward to a person who furnishes and reports original information relating to a violation of the state’s public assistance fraud laws, unless the person declines the reward. The information and report must:

The reward requirement is subject to availability of funds and may not exceed 10 percent of the amount recovered or $500,000, whichever is less, in a single case. The reward must be paid from the state share of the recovery in the Federal Grants Trust Fund from moneys collected pursuant to s. 414.41, F.S. The bill specifies that a person who receives a reward is not eligible to receive funds pursuant to the Florida False Claims Act for Medicaid fraud for which the reward was received. The bill amends s. 414.095(14), F.S., to add two additional prohibitions and restrictions. The first prohibition limits the out-of-state use of temporary cash assistance (TCA) benefits to 30 consecutive days and requires termination of the TCA benefits if used out-of-state for more than 30 days. The bill directs DCF to adopt rules providing for the determination of temporary absence and a recipient’s intent to return to the state.

The bill increases the degree of the offense from a first degree misdemeanor to a third degree felony.

Under the provisions in the bill, applicant information will be electronically input and transmitted for processing to the DACS Division of Licensing (the division) in Tallahassee. Licenses will be issued by the division by mail.

The bill requires county tax collectors seeking appointment to submit a written request to the division. Upon approval of the request, the bill authorizes the division to enter into a Memorandum of Understanding (MOU) with the tax collector on behalf of the department.

All personal identifying information provided for the license or renewal that is contained in a tax collector’s records as a result of the MOU is made confidential and exempt as provided in s. 790.0601, F.S., by a related bill, CS/HB 525. This bill was actually introduced in July of 2014, and is now being utilized.

The bill preserves school board authority to discipline students when simulating a firearm or weapon substantially disrupts student learning, causes bodily harm to another person, or places another person in reasonable fear of bodily harm. Consequences imposed upon a student must be proportionate to the severity of the infraction and consistent with school board policies for similar infractions.

Disciplinary actions involving student clothing or accessories must be addressed according to the statutorily prescribed interventions for dress code violations, unless wearing the clothing item or accessory causes a substantial disruption to student learning. If it does, the infraction may be addressed in a manner that is consistent with school board policies for similar infractions.This bill went into effect the moment it was signed and is being reiterated for law enforcement agencies and education facilties that are unfamiliar with the new law.

Juvenile sentencing/justice: The bill conforms Florida law to recent United States Supreme Court decisions involving the sentencing of juvenile offenders. The bill provides that any offender who is convicted of murder that was committed before he or she was 18 years old may be sentenced to life imprisonment only after a mandatory hearing at which the judge considers certain factors relative to the offender’s age and attendant circumstances. For capital offenses, the judge must impose a minimum sentence of at least 40 years if the juvenile offender actually killed, intended to kill, or attempted to kill the victim.

A juvenile offender who is convicted of murder that is a life felony or a first degree felony punishable by life imprisonment is also entitled to a sentencing review after 25 years if he or she actually killed, intended to kill, or attempted to kill a victim. If the offender did not actually kill, intend to kill, or attempt to kill the victim, then he or she is entitled to a sentencing review after 15 years.

If the court that conducts any sentence review hearing determines that the offender has been rehabilitated and is fit to reenter society, the offender must be released with a modified sentence that requires serving a minimum term of 5 years of probation. Otherwise, the court must enter a written order stating the reasons for not modifying the sentence.

The bill amends ch. 985, F.S., which provides a framework for the juvenile justice system in Florida and delineates duties and responsibilities of the Department of Juvenile Justice (DJJ). Specifically, the bill enhances the state’s focus on serious juvenile offenders, adopts measures to reduce recidivism, and increases care of juvenile offenders in the department’s custody.

To provide an increased focus on serious cases and public safety, the bill:

To reduce recidivism through recognizing the special needs of children and the need for transitional services, the bill:

To improve care to juveniles in the residential custody of the DJJ, the bill:

To increase performance accountability, the bill requires the DJJ to adopt a system to measure performance based on recidivism rates of providers and programs, and to annually report findings to the Legislature.

The bill codifies a provision found in the 2013-2014 Implementing Bill for the General Appropriations Act which caps the allowable rate for hospital health services provided to juveniles at 110 percent of the Medicare allowable rate, with a cap of 125 percent in limited cases.

This bill grants the DJJ greater flexibility in the assessment process by allowing a DJJ employee other than a juvenile probation officer to participate in intake, screenings, and assessments.

These provisions went into effect July 1, 2014, with the exception of the newly created willful and malicious neglect offense, which takes effect October 1, 2014.

Elected municipal officers and employees (Ethics):This bill amends the Code of Ethics for Public Officers and Employees as follows:

The bill also provides that state, county, and municipal officers may abstain from voting when presented with a conflict of interest established in an additional or more stringent standard of conduct adopted pursuant to s. 112.326, F.S. The disclosure requirement is satisfied by compliance with the agency, county, or municipal disclosure requirement. The bill also provides that a member of a board may abstain to assure a fair proceeding that is free from potential bias or prejudice.

Finally, the bill establishes a code of ethics for the Miami-Dade Expressway Authority which:

The aforementioned information was provided to Ocala Post by the Florida Senate.