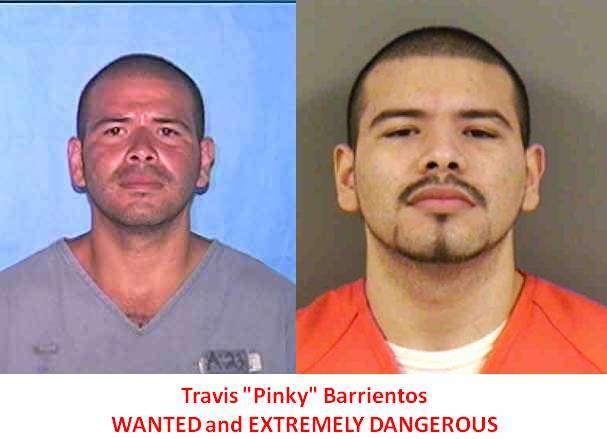 Polk County, Florida — The Polk County Sheriff’s Office is seeking the public’s help in locating 30-year-old Travis “Pinky” Barrientos, who has a warrant for his arrest for Attempted Second Degree Murder. His last known address is 112 Prospect Ave in Winter Haven.

During the early morning hours of Saturday, April 19, 2014, Barrientos got into an altercation with 32-year-old Juan Bautista, on Rifle Range Road in Wahneta. During the altercation, Barrientos stabbed Bautista repeatedly, and screamed he was going to kill Bautista. Bautista was taken to LRMC, where he was treated and released.

Barrientos has been positively identified as the suspect in this case. PCSO deputies have obtained a warrant for his arrest for Attempted Second Degree Murder.

He has several tattoos:

Barrientos has been in the Polk County Jail on three prior occasions, for Shooting Into an Occupied Dwelling, Domestic Violence, Fleeing to Elude, Possession of Meth, Grand Theft Auto, DWLSR, VOP, Carrying a Concealed Weapon and Attempted First Degree Murder, for which he was sentenced to 10 years in prison and was just released in November 2013.

Barrientos may have ties to other areas in Central Florida.

He is considered armed and extremely dangerous. If you see him do not attempt to approach him, call 911 immediately.

If you have any information on the wherabouts of Travis “Pinky” Barrientos, you are urged to contact the Polk County Sheriff’s Office immediately at 863-298-6200, or Heartland Crime Stoppers at 1-800-226-TIPS (8477). Anonymity is Guaranteed! You may also be eligible for a cash reward.