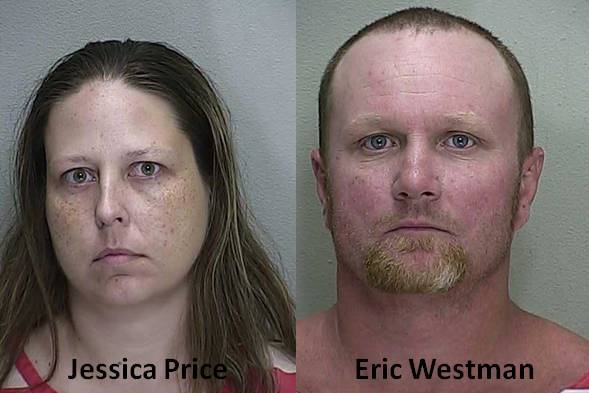 The incident unfolded when Price, Deputy Mark Swarbrick and a Florida Department of Children and Families (DCF) investigator were conducting a walk-through at the listed address.

The deputy could smell a strong odor of un-smoked marijuana coming from inside the residence, according to reports.

Deputy Swarbrick asked Price if he could search the back bedroom where the odor appeared to be coming from, to which Price replied, “Wait until my boyfriend gets home.”

Price was told no one would be allowed in the room until it could be cleared, but Price ignored several warnings and was arrested, according to reports.

After Westman arrived a short time later, he signed a permission form allowing Deputy Swarbrick to search the area from which the marijuana smell was coming.

Also found were 58 grams of methamphetamine, 23 grams of cocaine, 1,677 grams of marijuana and several guns, including a loaded semi-automatic assault rifle.

Westman has previously been arrested for Cocaine Possession.

Price was charged with Resisting Arrest. Price was not charged for any of the drugs or weapons due to Westman taking responsibility for everything. She was released after posting a $500 bond.

Westman was released after posting a $80,500 bond.

It is unclear if children were home at the time of the discovery.