[Last updated on September 1, 2016, at 4:00 p.m. Video is brought to you by our partners at AccuWeather. Alerts will be updated throughout the day.]

Hermine has strengthened to a hurricane and will deliver heavy rain, gusty winds, flooding and possibly tornadoes into Friday.

This will be the first hurricane to make landfall in Florida since 2005, when Wilma hit.

The center of Hermine has made the anticipated northeastward turn and is located about 135 miles south of Apalachicola, Florida, and 180 miles southwest of Cedar Key, Florida.

Marion County is under a Tropical Storm watch for the next 36 hours. A tornado warning is in effect until 11 p.m. Residents can expect winds between 35-48 mph with gusts up to 60 mph. Flooding is also possible. These conditions can be expected to continue into Friday.

Thursday night, tropical storm conditions expected with the possibility of rain and thunderstorms. Some of the storms could produce heavy rain. Low around 75. South wind 22 to 27 mph increasing to 31 to 41 mph. Winds could gust as high as 60 mph. Chance of precipitation is 90%.

Friday morning, rain with the possibly of thunderstorms. Some of the storms could produce heavy rain. High near 83. Very windy, with a southwest wind 22 to 25 mph, with gusts as high as 38 mph. Chance of precipitation is 80%.

Friday night, rain and thunderstorms likely. Some of the storms could produce heavy rain. Cloudy, with a low around 75. Southwest wind 7 to 10 mph. Chance of precipitation is 60%.

Marion County remains under a Tropical Storm Warning as well as a Tornado and Flood Watch.

These threats should diminish by Saturday.

The following counties are also under a Tornado Watch. 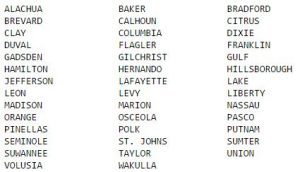 Schools closed as of now

On Thursday, officials announced that all Marion County Public Schools will be closed

Citrus County officials announced schools will be closed in that area.

Dixie County Schools are closed on Thursday and Friday. A shelter will open at Old Town Elementary School at 8:00 a.m. on Thursday.

Gilchrist County Schools are closed on Thursday and Friday. School events scheduled for Thursday will also be cancelled, those on Friday are pending decision.

Hernando County Schools are closed Thursday. They have not decided on Friday.

Lafayette County Schools are closed on Thursday and Friday.

Hillsborough County public schools are closed on Thursday. No decision on Friday.

Manatee County District Schools and School District offices will be closed Thursday. No decision has been made for Friday.

“We expect the storm to become a hurricane before making landfall north of Tampa and perhaps close to Apalachicola, in the Big Bend of Florida during Thursday evening,” according to AccuWeather Hurricane Expert Dan Kottlowski.

Some airlines have announced that they are waving flight change fees in the path of the storm.

Sandbags will be provided to residents at no charge. The limit is 10 per resident.

Check back for frequent updates.