Nevada — The truth behind the seizure of Nevada rancher Cliven Bundy’s cattle is now crystal clear to some local officials.

The BLM (Bureau of Land Management) claimed that the use of 200 or more armed agents was because they were trying to protect turtles. However released documents revealed that the seizure was actually over a deal that Senator Harry Reid had secretly made with the Chinese in regards to solar development on the land that is valued at an estimated $43 million dollars.

Nevada Governor Brian Sandoval (R) criticized the BLM for its use of force and intimidation. He said the BLM stole 400 of Bundy’s cattle and herded them into corals.

Sandoval said, “The BLM then tried to coral protesters like cattle- it’s laughable.”

“This land belongs to the state, not the federal government, this situation reeks of corruption.”

When Utah residents announced they were going to travel to Nevada to stand by Bundy and help protect his ranch and cattle, Commissioner Tom Collins had a mouthful to say.

Clark County Commissioner Tom Collins then released this statement during a press conference,” All of you people from Utah are a bunch of inbred bastards. People coming from Utah to stand against the fed’s better have funeral plans. You should all turn your asses around and mind your own f***ing business.”

Collins’ statement sparked massive controversy throughout the state of Utah as well as across the country.

Piute County, Utah Commissioner Darien Bushman responded by saying, “Now there is some classy leadership for you.” 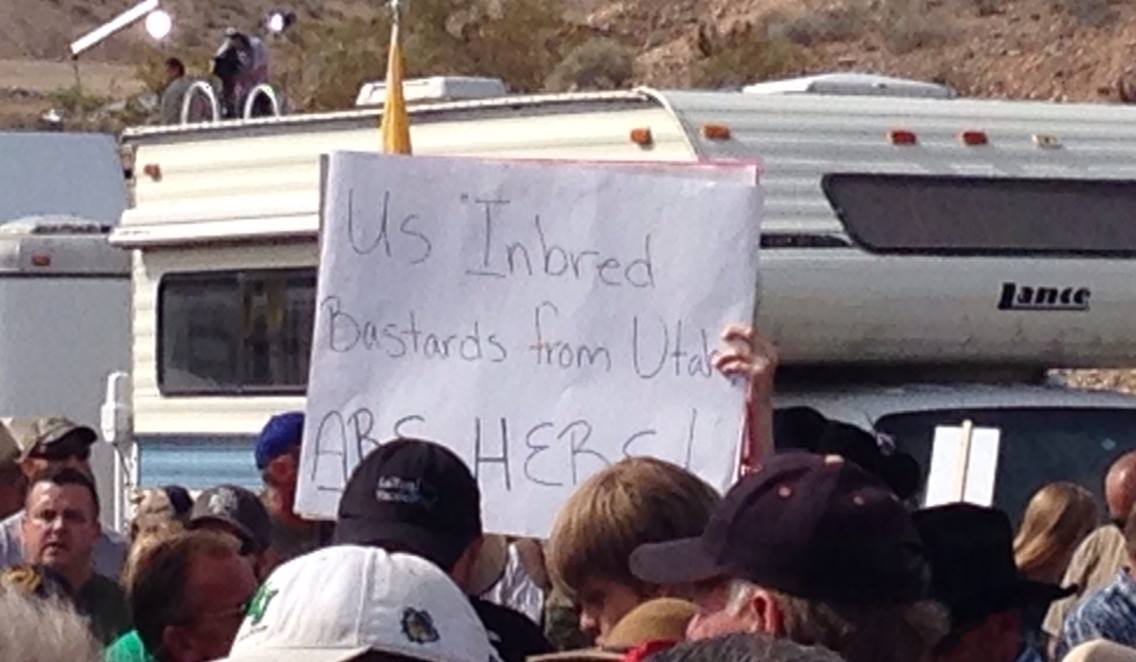 Bushman also said that Clark County Sheriff Douglas Gillespie was too spineless to exercise his jurisdiction and arrest the feds on charges of trespassing and grand theft.

Americans from all over armed themselves, united and stood their ground against the feds.

Feds had snipers on protesters and threatened to shoot anyone if they crossed the fence. Protesters and real life cowboys then called their bluff. Cowboys armed themselves and had snipers looking through their scopes at other snipers.

Bundy said,” This is America and we are no longer going to take the abuse from the federal government. We are going to arm ourselves to protect our land and our rights.”

A Clark County Judge said that citizens have every right to protect themselves from corruption and against the use of intimidation from the federal government. He went on to say that in reality, the BLM should not even be armed and the Sheriff could have actually disarmed them.

Ranchers asked,“How can the federal government justify the use of 200 armed men and all of the resources that were used to try and intimidate us when we have illegal’s crossing our borders all the time?” They went on to say that it is a sad day when the threat to shoot legal citizens over “turtles” takes precedence over keeping our borders safe.

Many have described the standoff as a scene from the movie ‘V For Vendetta.’ While others were calling it another Waco.

Ranchers said, “The corruption runs from the county commissioner’s all the way up to the Senator, and we have had enough. If the fed’s want to use violence and bring guns, we can speak that language too.”

“There were police sneaking up behind people and slamming them on the ground for no reason then laughing. It was not until police aggressively approached citizens and tasered someone from behind that things got out of control. The entire situation was recorded from beginning to end, this was done so police could not say it was only a ‘partial video,’ everything was recorded by Channel 8 News, infowars.com as well as many other media outlets.”

In a press conference on April 14, 2014, Bundy confirmed that several of his cattle had actually died as a result of the BLM’s actions.

The BLM also refused to comment and has since deleted material from its website that describes the land deal between the senator and the Chinese. A land deal that Senator Reid now denies.

Ocala Post was however able to obtain some raw video footage.