Ocala, Florida — A maintenance worker is recovering from his injuries after he was attacked by three men on Monday.

Ocala police responded to Village Green Apartments, located at 500 Southwest 33 Avenue, after someone called 911 and reported a fight.

Upon arrival, Officer Kristen Whitston saw that a crowd had gathered in front of the apartment complex.

The victim’s son told police that he and his dad (the maintenance worker) heard bottles being broken on the road inside the complex.

When the maintenance man told the men to stop and pick up the glass, they refused. One suspect, who has not been identified, came toward the maintenance worker with a broken bottle and the two fought in the street.

Then, two other suspects, identified as Maximiliano Vasquez-Garcia, 20, and Melesio Lopez-Garcia, 21, came after the son. The father then came to his son’s rescue and intercepted the two men just as they grabbed his son.

According to reports, Melesio then armed himself with a box cutter and cut the father across his abdomen.

The son then grabbed a machete and, after helping his dad, held Maximiliano and Melesio until police arrived.

The third suspect fled the scene with injuries to his face.

Police said that Maximiliano and Melesio had no identification, barely spoke English, and were not cooperative.

OPD Public Information Officer Sgt. C. L. Barnes said she could not disclose whether or not the suspects were in the U.S. illegally. However, OPD did state that both suspects were both born in Mexico.

The son told investigators that he had to arm himself with a machete to get other people off of his dad.

Maximiliano and Melesio were arrested and charged with Aggravated Battery with a Deadly Weapon.

Anyone with information about this case is asked to contact the Ocala Police Department at 352-369-7000, Crime Stoppers at 368-STOP,  or text 274637 using keyword 368-STOP.  Tipsters can also visit www.ocalacrimestoppers.com. Anonymity is guaranteed 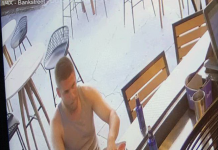