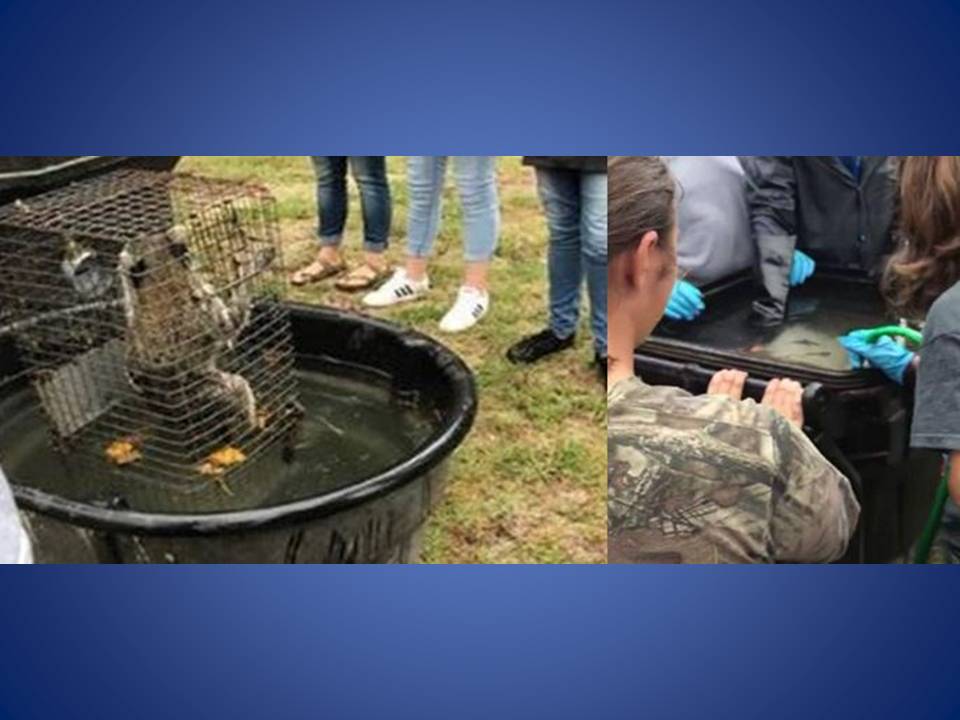 School Superintendent Heidi Maier says that the Forest High School agriculture teacher, Dewie Brewton, who enlisted students to help him drown two nuisance raccoons and an opossum, should be fired.

The Florida Fish and Wildlife Conservation Commission is still investigating the incident.

On Wednesday, Marion County Public Schools Public Information Officer, Kevin Christian, said, “Our school district is investigating this incident at Forest High School. While law enforcement tells us the teacher may not have done anything illegal, his actions before students are certainly questionable.”

“The district placed this teacher on paid administrative leave Tuesday pending the outcome of our investigation, which is standard procedure anytime an employee is accused,” said Christian.

(1) A person who unnecessarily overloads, overdrives, torments, deprives of necessary sustenance or shelter, or unnecessarily mutilates, or kills any animal, or causes the same to be done, or carries in or upon any vehicle, or otherwise, any animal in a cruel or inhumane manner, commits animal cruelty, a misdemeanor of the first degree, punishable as provided in s. 775.082 or by a fine of not more than $5,000, or both.

(2) A person who intentionally commits an act to any animal, or a person who owns or has the custody or control of any animal and fails to act, which results in the cruel death, or excessive or repeated infliction of unnecessary pain or suffering, or causes the same to be done, commits aggravated animal cruelty, a felony of the third degree, punishable as provided in s. 775.082 or by a fine of not more than $10,000, or both.

The FWC is not sure if Brewton actually broke any laws, but the investigation is still underway.

However, the FWC says there is a proper way to deal with nuisance animals.

“Live-captured nuisance wildlife must be released legally or euthanized humanely within 24 hours of capture or trap inspection. Any non-target wildlife should be released immediately at the capture site. Unless prohibited by rabies alert or quarantine issued by County Health Department or County Animal Control, live-captured nuisance wildlife may be transported only for the purpose of euthanasia or for legal release, Euthanasia guidelines can be found on the Report of the American Veterinary Medical Association Panel on Euthanasia. Only native species of wildlife may be released.”

Once FWC has completed its investigation, the case will be turned over to the State Attorney’s Office. Ultimately, the SAO will determine if any charges should be filed against Brewton.

Investigators said there has been no mention of any type of punishment for students who willfully participated in the drowning of the animals.

Many have defended Brewton’s actions, stating that he is a man of faith. Some parents say that Brewton has been a great mentor for the students at FHS.

The Marion County School Board has since released the following statement.

Marion County Public Schools is appalled at the actions of an agri-science teacher accused of killing nuisance animals in front of students earlier this week.   While the district conducts its own investigation, we are now aware two additional agencies are also investigating — the Florida Fish and Wildlife Conservation Commission and the Florida Department of Health. Regardless of the investigative outcomes, Superintendent Dr. Heidi Maier is recommending termination.

Marion County’s education standards – in fact, Florida’s education standards — do not include activities for the destruction of live animals, nuisance or not.  While law enforcement determines whether this teacher’s actions were legal or not, his actions before students are entirely unacceptable and cause us great concern.

The teacher involved remains on administrative leave while the district, the Florida Fish and Wildlife Conservation Commission and Florida Department of Health each conduct separate investigations.

Until those investigations are complete, no further details can be officially released.

Brewton remains on paid leave at this time.