Washington — A man says he recorded the moment that police opened barricades and encouraged the crowd to storm the Capitol. Some police officers, which has been verified, even took selfies with protesters. The video, however, is short and is difficult to tell if it is actually in the context in which it appears to be.

The aforementioned socialists are also known as the Squad.

The rioters maimed, killed, and demanded to be heard. BLM and ANTIFA were accepted by AOC and Ilhan Omar, who openly hates America while embracing Islam.

During this time, those on the left, including Kamala Harris and Joe Biden, stated that the “protesters must endure…or stay strong.” The rioters and anarchists were not condemned or referred to as terrorists even as they ran off police officers and burned a police station and other businesses to the ground.

Facebook, Google, and Twitter did not block videos, or ban the accounts of any CNN reporters or politicians who referred to the rioters as “protesters.” No, instead, the tech giants glorified the mayhem and supported it. They even allowed videos to be promoted and advertised whilst preventing any political video portraying Biden or his family in a bad light from being sponsored or promoted.

On Wednesday, Trump supporters turned up in droves at the Capitol to show their support for President Donald Trump hoping for the Senate to keep socialism out of the Whitehouse.

Emotions were high and many protesters stormed the Capitol building in hopes of swaying the political agenda of the corrupt establishment.

Many, wrote on Facebook, “The people should not fear their government. The Government should fear their people.”

Amanda Collins wrote, “This is as American as it gets. Storming the Capitol to shutdown tyranny.”

Democrats immediately moved to label anyone at the protest as a terrorist or right-wing extremists. AOC referred to them as white supremacists.

During the incident, an unarmed Air Force veteran, Ashli Babbitt, was shot and killed by a Capitol police officer. That officer has since been placed on administrative leave. Chief of Police Steven Sund confirmed this information with Ocala Post.

The shooting was captured on video and it was confirmed that Babbitt was not armed and had not threatened any officers. She was shot through a window.

Those on the left, and those who have been bought and paid for, immediately moved to blame President Donald Trump, calling for Congress to invoke Amendment 25. Including, Kamala Harris…the same woman who, over the summer, told rioters “protests will not and should not stop.” She continually referred to the burning of a police station as a peaceful protest and not a riot. She refused to recognize the rioters as so. 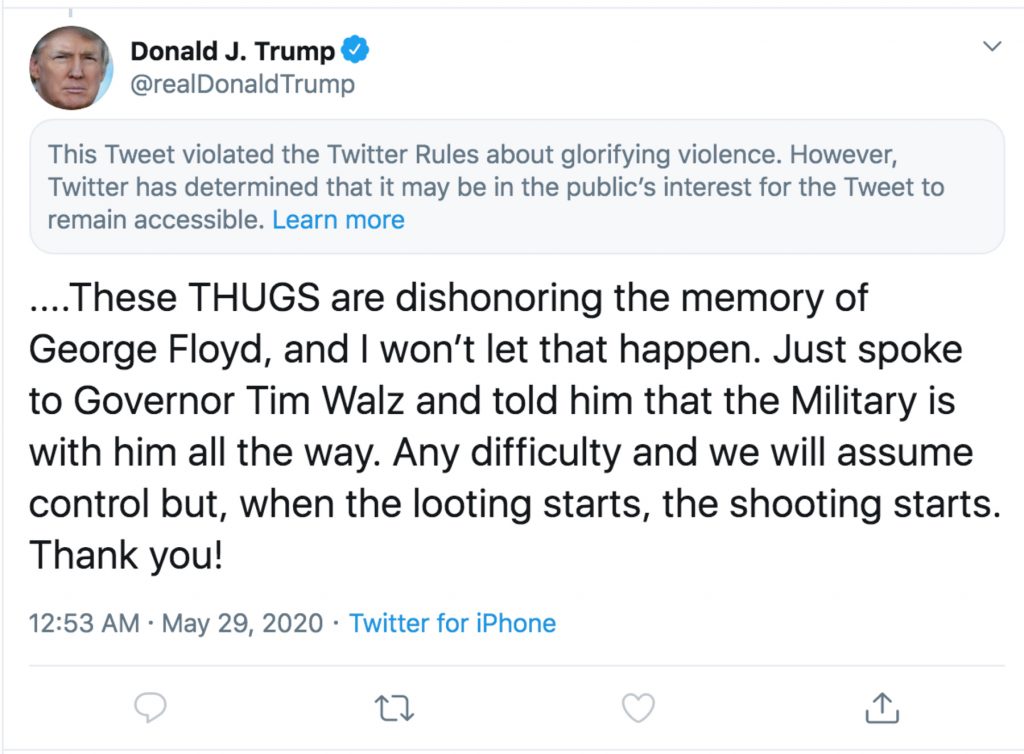 During the January 6, 2021, protests at the Capitol, President Trump tweeted out several messages to his supporters denouncing violence. 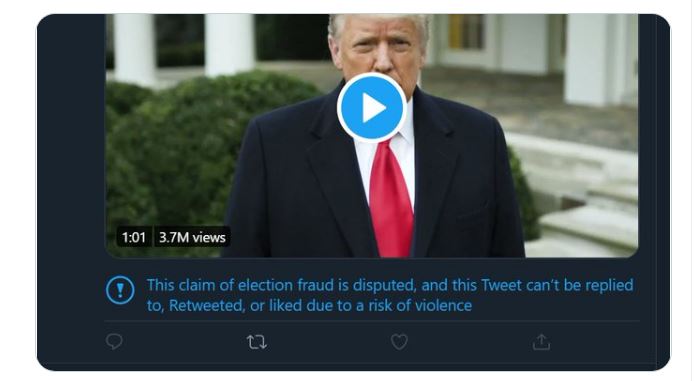 The tech giants openly admitted Thursday to shadow banning Trump. In a statement, Mark Zuckerberg said Facebook deleted the video because he felt the video message was violent in nature and would incite further violence.

Shadowbanning, also called stealth banning, ghost banning, or comment ghosting, is when tech giants block or partially block a user or their content from an online community so that it will not be readily apparent to the user that they have been banned.

Ocala Post was able to obtain a copy of the video.

The video was deleted, but rioters burning down a police station and allowing the videos to be monetized is acceptable by Facebook and Twitter standards.

Anna O., wrote, “According to the new Democrats and woke snowflakes, rioting, looting, burning, and killing cops is a good thing. They have supported it all year up until now without a word. So I guess he is safe!”

Samantha Volpe, wrote, “I think we do need an uprising or revolution. These people wanted to defund police and condoned heavy rioting and burning down a town. Now they will be in power? No, no, no.”

There were other tweets sent out condemning Wednesday’s violence as well.

Essentially, despite video surveillance evidence and eyewitness testimony presented during multiple election fraud hearings, the electoral votes were given in favor of Biden.

The overwhelming evidence was completely ignored.

Facebook and Twitter said they have blocked President Trump from posting indefinitely, once again, violating free speech rights and acting as a publisher.

For years, President Trump was accused of, with zero evidence, of winning a “rigged election” by way of Russian influence and collusion. This was the headline in every other liberal media outlet paper across the county for the last four years. This was all followed by a bogus impeachment attempt. Which is, again, being spearheaded by Ilhan Omar.

A person could not even show support in public without being beaten. In one of the dozens of cases, a man was beaten and a CNN commentator publicly mocked him.

Now, during the 2020 election, when there was actually hard, physical evidence, evidence tampering, and illegal, last-minute changes to Pennsylvania voting laws in order to assist and benefit Biden during the election, socialist communists such as AOC, Nancy Pelosi, and Ilhan Omar turned their heads and still put the blame on President Trump.

Facebook and Twitter conspired and deleted videos showing the fraud, only to later put them back up and backpedal.

Facebook, Twitter, and Google also conspired and blocked stories about the crime and large scale corruption inside the Biden family. A damning story that was first published in the New York Times was immediately deleted and blocked from the tech giants. A story which outlined that Joe Biden, his wife Jill Biden, and his son Hunter Biden all have profited immensely from China and the Ukraine.

Many, many people have turned to Facebook and demanded a Revolution. Now, that parts of the Government have seen that the people are fed up, many of those elected officials are scared and are demanding those who came into the Capitol be arrested. Not just because they stormed the Capitol, but because the crooked politicians, both Republican and Democratic, now know the strength of the people in numbers.

While some laws were broken when storming the Capitol, and property damage is not acceptable, neither is the loss of life, Americans are certainly tired of the tyranny. However, any time an American expresses that sentiment, they are referred to as a right-wing extremist, white supremest, conspiracy theorist, or sovereign citizens…even by some law enforcement officials.

In contrast, what would have happened if the Boston Tea Party had not taken place?

Quick history lesson:  In 1773, American colonists, frustrated and angry at Britain for imposing “taxation without representation,” dumped 342 chests of tea, imported by the British East India Company into the harbor. The event was the first major act of defiance to British rule over the colonists. It showed Great Britain that Americans wouldn’t take taxation and tyranny sitting down, and rallied American patriots across the 13 colonies to fight for independence.

The Boston Tea Party was not an election, but the ideology may be the same.

Now, in 2021, America faces a much larger, more unscrupulous government. Americans face coercive big tech and left-wing media who manipulate the truth and the new president is not likely to bypass the media and post the truth as President Trump did.

President Trump was not a career politician, which is why he was so well-liked and admired.