Ocala, Florida — Today, a family from Oregon reached out to Ocala Post hoping to generate new leads that would help locate their missing 17-year-old daughter.

The Oregon family believes the “rainbow people” in the Ocala National Forest, Florida area might have information on their daughter’s whereabouts.

Hannah Thomas-Garner, of Ashland, Oregon, was last seen on November 30, 2014. According to officials, local teens planned to attend a rave party at an old rock quarry located on Dead Indian Memorial Road in Ashland. The quarry is a popular area for teen parties.

According to family members, Hannah told her parents she was heading to bed early that night, but she “snuck” out of her house sometime that evening. She allegedly met up with several friends at the party, including 15-year-old Sylvia Davis, 19-year-old Richard Silver from Dunsmuir, and 19-year-old Andrew Thibert from Weed.

The two men had reportedly driven from the Mt. Shasta area in Northern California.

Ashland Police Department Deputy Chief Tighe O’Meara believes Hannah made plans to run away with other teens, but the family says the circumstances surrounding Hannah’s disappearance are very suspicious. They also said running away would have been out of character for Hannah.

On December 1, police found Hannah’s car 75 miles away. The windshield had been broken and there were dents all over the car. Her cell phone was inside the vehicle, but the SIM card had been removed. Additionally, small amounts of blood were found inside the car. Blood that the family says the police department is refusing to send to the lab because they have classified Hannah as a runaway.

Then, on December 6, the teens that Hannah was suspected of running away with were located in an isolated area of woods near the Mattole Beach Campground in Petrolia, Californina.

Davis, Silver, and Thibert were questioned about Hannah’s disappearance because they were seen with her. However, all three denied that Hannah was with them when they arrived near the campsite. Thibert was arrested on unrelated sex charges, but all three individuals were cleared in her disappearance.

The family believes individuals involved with her disappearance were making plans to attend the Rainbow Festival in Ocala.

Friend of the family, Brandi Redding Gallé said, “She mysteriously disappeared from a party here in Oregon and a lot of the kids from the party headed to Ocala for the Rainbow Festival. Those individuals are currently camping in the woods.”

Sergeant Shawn Richards of the Jackson County Sheriff’s Office said they do believe Hannah is in danger.

Hannah’s father, Jeff Garner, told Ocala Post, “There is speculation that she went to Ocala with a group from the Ashland, Oregon area that have posted on Facebook about their travels. Now this is long shot, but she has been missing for over 70 days and we must expand our search and explore all options.”

If you have any information about the disappearance of Hannah, you are asked to contact law enforcement immediately.

You can also e-mail tips to Leads4hannah@outlook.com

The family has also hired a private detective. 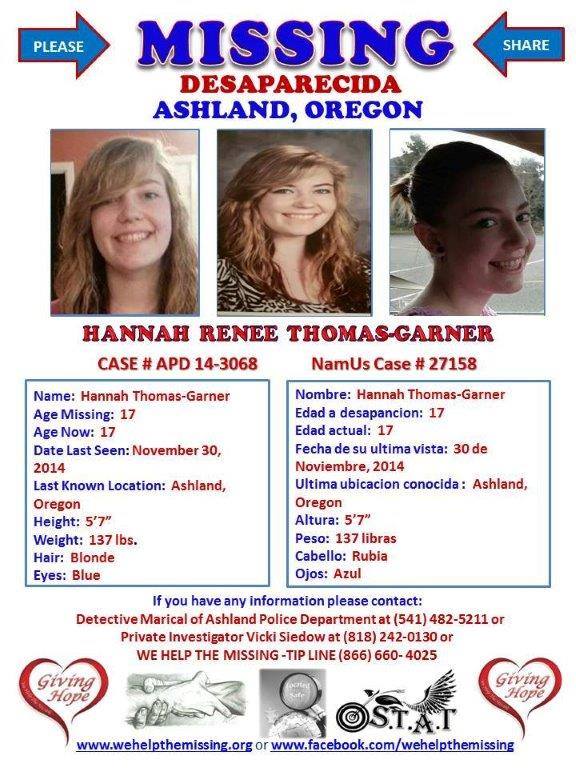