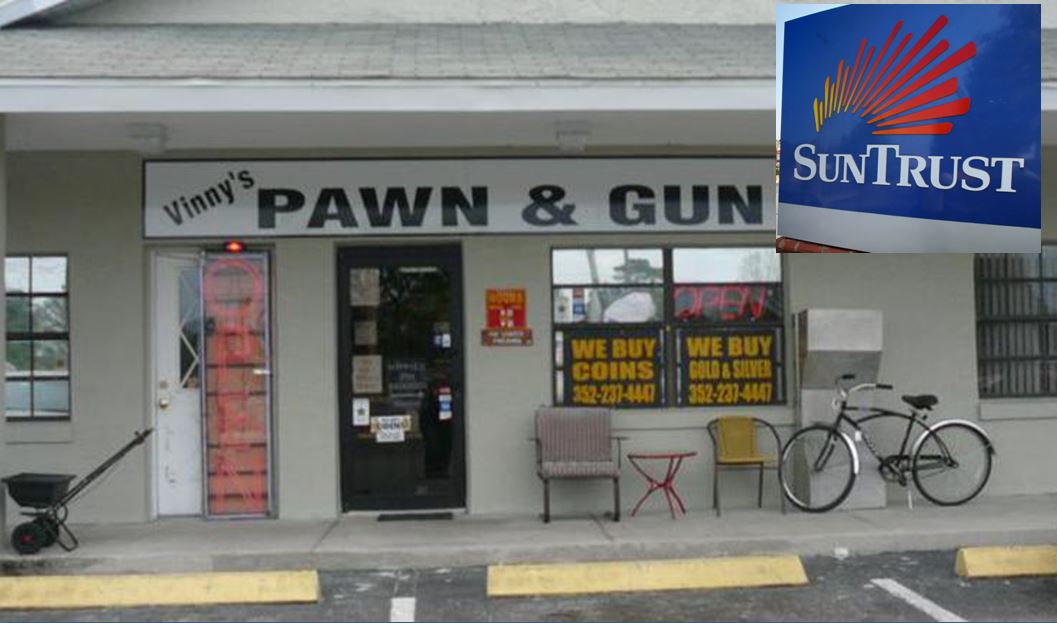 Ocala, Florida — SunTrust Bank is taking heavy fire after they sent out letters to some of its business customers telling them their accounts would be closed.

Pawn shop owner, Evie Mostacci, told Ocala Post that she firmly believes that SunTrust is targeting businesses that sell guns and ammunition. Mostacci received a letter from SunTrust informing her that she had to close both her savings and her business checking account in August 2014.

American Gun & Pawn Inc., owner Steve Champion, who also received a letter from SunTrust, said he too believes it is because he sells guns.

The owners said they feel that the Obama administration has influenced the Federal Deposit Insurance Corporation (FDIC) with a program called “Operation Choke Point,” which is an operation that was started by the U.S Justice Department in 2012. The U.S. Justice Department said that “Operation Choke Point” was implemented as a way to stop banking fraud. The operation allegedly only investigated banks’ relationships with “third-party payment processors,” which are the payment services that online stores often rely upon, to determine if they were defrauding consumers.

SunTrust denies that the FDIC has influenced the bank’s decision.

“SunTrust is pro-small business, and we are proud to serve more than 400,000 small business clients. SunTrust fully supports all of the rights that Americans are granted under the Constitution, and we continue to maintain banking relationships with licensed firearms dealers. It is consistent with long-standing industry practice to review relationships to ensure they satisfy a range of business and risk considerations. We have decided to discontinue banking relationships with three types of businesses – specifically payday lenders, pawn shops and dedicated check-cashers – due to compliance requirements. We remain committed to serving the needs of our communities while meeting the standards of our industry,” SunTrust wrote in a statement.

Mostacci said that despite what SunTrust has told the media and the public, her personal experience tells a different story.

“We first noticed that there was a big change in almost all of the employees working at SunTrust, including tellers and loan officers. We used the drive-thru all the time, and after 17 years of banking with SunTrust we got to know the people there. Well , that changed,” Mostacci said. “Just prior to receiving a letter I had visited SunTrust; and during my visit I was specifically asked by a bank employee if I sold firearms, which I answered yes.”

Mostaccis said, “Thinking the employee was interested in a firearm, I told him to come down and check us out. Days later, I received a letter from SunTrust’s corporate office telling me I had to close my accounts.”

The Justice Department also denies that the program was implemented to intimidate the FDIC into not doing business with those that sell firearms. However, a list that was created by the FDIC in 2011 specifically named firearms sales, coin dealers, dating services, fireworks shops, tobacco sales, pornography, travel clubs, lottery sales, cash advance businesses, and pharmaceutical sales as businesses that should be targeted.

Oddly enough, the only businesses that have reported receiving letters have been those that sell firearms and a few tobacco shops. Additionally, many believe there is also a direct link between “Choke Point” and the fact that pharmacies have recently refused to fill prescriptions for many people.

On May 29, 2014, House Oversight and Government Reform Committee Chairman Darrell Issa (R-Calif.) released a staff report, citing that the DOJ’s creation of “Operation Choke Point” illegally choked off legitimate businesses. It was suggested that the list created by the FDIC had become a “hit list” of sorts that specifically targeted small businesses in the categories that were on the list.

Pawn shop owners said the operation was a back door for the Obama administration to be able to prevent the sale of guns.

“Operation Choke Point is the Justice Department’s newest abuse of power,” Issa said. “If the administration believes some businesses should be out of business, they should prosecute them before a judge and jury. By forcibly conscripting banks to do their bidding, the Justice Department has avoided any review and any check on their power.”

So why are business owners just now hearing about this? Because until now, the operation was kept secret.

It wasn’t until gun rights advocates and pawn shop owners like Mostacci and Champion started to “connect the dots” that they realized what was happening, and why.

The DOJ said they have never targeted those that sell guns or ammunition using “Choke Point.”

However, the American Banking Association said banks had most likely been influenced by federal guidelines. And the proof was in a letter from the FDIC to banks urging them to deny service to customers in the categories on the list created by the FDIC. On February 12, 2015, the letter was “corrected.”

“The FDIC is issuing this statement to encourage institutions to take a risk-based approach in assessing individual customer relationships rather than declining to provide banking services to entire categories of customers.”

Then, on July 28, 2014, one month before SunTrust began sending out letters informing pawn shop owners that their accounts would be closed by a certain date, the FDIC removed the “hit list” they had published. However, they did revise it and republished a list of guidelines.

Brian Wise, senior advisor for the U.S Consumer Coalition, said, “Choke Point has one purpose the government won’t admit, and that’s to go after businesses they couldn’t legislate out of existence for the last two decades.” Adding, “In late 2014, the Obama Administration began a process that would protect the effectiveness of Operation Choke Point by transferring the program from the DOJ and FDIC to the Consumer Financial Protection Bureau (CFPB). The program was never intended to be made public, and as such, would have been most effectively executed through Attorney General Holder’s leadership of the Financial Fraud Enforcement Task Force with DOJ and FDIC at the lead. Once the program was made public, and victims began coming forward, the Administration had to find a way to protect the program and its ability to prevent lawful industries from operating. Due to the lack of congressional oversight, and the unique funding and leadership structure of the CFPB, the Administration knows that it will make the perfect agency to carry on the legacy of Operation Choke Point. The Administration will continue to remove any obstacles in their way.

The U.S. Consumer Coalition has been warning lawmakers and industry leaders about the plan for the CFPB to take over Operation Choke Point since the FDIC took down their list of ‘high-risk’ merchants in 2014. Now, everyone can begin to see that the CFPB is one of the the nation’s most dangerous, unaccountable, and out of control agencies in the federal government.”

“I’m not saying ‘Choke Point’ is the only reason why SunTrust is closing accounts, but it’s pretty suspicious,” Champion said.

Mostacci said that what SunTrust is doing to small businesses is illegal and wrong. She also said she plans to protest against SunTrust this Friday.

Business analysts said that the main goal of “Choke Point” is to cut off financial services to businesses that the government deems as “risky,” thus forcing small businesses to close their doors.