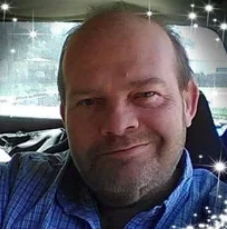 Paul Wade Henson, 49, went to be with his Lord, November 8, 2019. Paul was born in Lebanon, Missouri on December 4, 1969 his last residence was in St. George, West Virginia before moving to St. Augustine, Florida in 1980. In 1980, he moved from St. George to St. Augustine, Florida and resided there until 2011 where he moved to Eustis, Florida to be with his to his Mom, Francis "Gay" Davidson and Grandmother, Romalou Simpson. Paul was a warm, loving and devoted Son. He was also very funny and could always make you smile and laugh. He always had the "Gift of Gab" and never met a stranger. He was an awesome sales person in whatever job he had. His passion was the University of Florida (GO GATORS!) as well as his 1997 Dodge halfton pickup truck that he and his Mother Gay would work on as a hobby. Paul is survived by his Mother, Francis "Gay" Davidson, Adopted Son & Family: Justin Pritchard and Isabele Rivera, Brothers; Dale R. Rosier of St. Augustine, Florida, Russell L. Henson of Supply, North Carolina, Sisters; Tina Lawrence ODom of Hastings, Florida and Gina K. Barnett Henson of Soddy Daisy, Tennessee, Duke the dog and Prissy the cat. He is preceded in death by his Brother Thomas L. Henson, Grandmother, Romalou Simpson (2015) and Grandparents, Mr. & Mrs. Frank Bernhardt of Conway, Missouri and Mr. & Mrs. Oscar Henson Phillipsburg, Missouri. A Celebration of Life Memorial Services are tentatively planned for Saturday, November 30th. Location and times are yet to be determined.

Please share a condolence, photo or memory of Paul. We welcome all condolences that are positive and uplifting that will help family and friends heal.

Please share a condolence, photo or memory of Paul. We welcome all condolences that are positive and uplifting that will help family and friends heal.