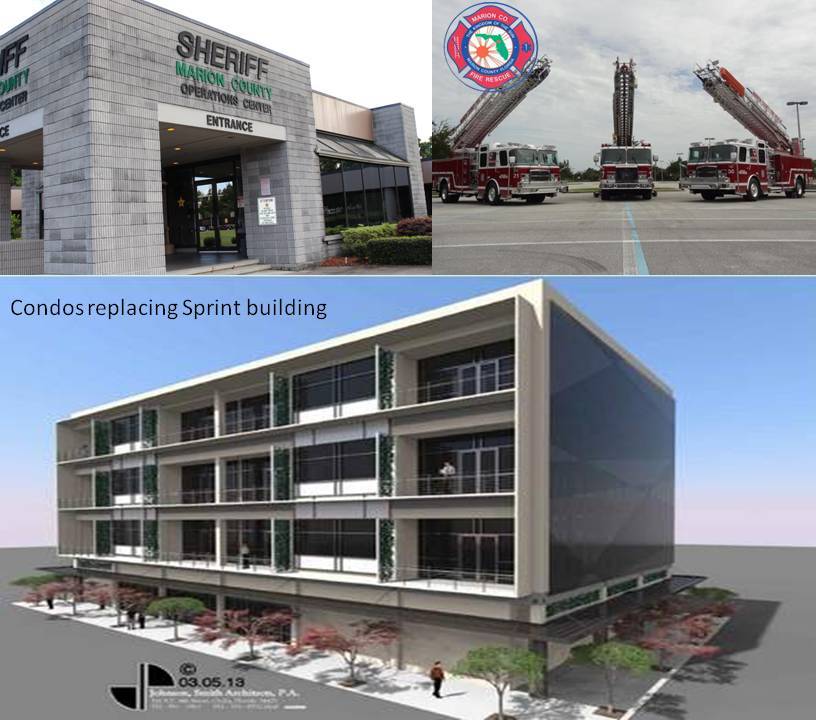 One would think the area would be developed as commercial; however, Sandy McBride, owner of McBride Land & Development, LLC, plans to convert the building into residential condominiums.

Residents said if the building would have been developed as commercial, it could have potentially paved the way for a large business and well-paying jobs.

The land that the old Sprint Building sits on was valued at $0 — you read right — $0.

Assistant City Manager, Marc Mondell, said the land was valued at $0 because the cost of converting the building would not be in favor of the developer if he had to pay for the property.

Essentially, the city did a “favor” for McBride.

The city council did say that property value for the surrounding area would rise once the project is complete. McBride paid $0 for the land, and in the end, taxes will increase for surrounding business owners and residents if property values rise, while wages and the unemployment rate stay the same.

Waiving permit fees for a developer, yet the city tries to impose fines on its citizens for flying what they deem “illegal flags” that in their opinion, amount to “clutter.”

Councilman Jay Musleh did not vote on the Sprint project because of a conflict of his personal interest in the property.

Councilman Brent Malever has not only received campaign contributions from McBride Land & Development, LLC, but also from multiple contractors and land developer Scott Siemens including his wife, Linda Siemens.

The combined list of contributions received by council members is made up of engineers, land developers, architects, and real estate brokers.

So while Councilman Musleh did not vote because of a conflict of interest in the deal, his colleagues, of whom also received contributions from the developer, did vote.

This type of corruption is something Marion County residents say the county and the city both have in common.

The Sunny Oaks Estates project is set to destroy some 400 to 450 acres of farmland near Interstate 75 and County Road 318 in Irvine. Once again, a majority of the companies and individuals involved with the project have given campaign contributions to county commissioners.

The project will be a combination of residential, commercial, and industrial development — a development that will certainly invite more crime, traffic, and population to an already crowded Ocala; it is the city of Orlando in the making. Again, bringing public safety to the table.

Scott Siemens, a developer on the project, was originally cleared for a project that would allow for townhouses, apartments, and a 220-room hotel to be built. Siemens is frequently represented by engineer David Tillman of the civil engineering firm, Tillman and Associates.

Monetary campaign contributions to commissioners namely come from real estate investors. Also contributing to commissioners’ campaigns are farmers who would benefit from land sales, underground utility companies, engineers, and developers who are directly involved in the recent development projects.

It should also be known to Marion County residents that all seven members of the Planning Board have ties to the construction industry; many are even involved in projects that come before them for review.

While county commissioners continually elude investigation by the FDLE despite numerous complaints, they proceed with land deals in which board members stand to benefit from — yet public safety continues to be on the “back burner.” This includes Marion County Fire Rescue.

On September 11, 2014, at the last minute, the commission announced it wanted another $8 million cut from the budget.

Despite the last minute requests for additional budget cuts, County commissioners want a three (3) percent salary increase for approximately 1,100 county staffers, but the commission was quick to point out that the Marion County Sheriff’s Office nor Marion County Fire rescue are on that list.

Marion County Fire Rescue is fed up with county commissioners — as is the Sheriff’s Office and Marion County residents.

Jill Clark of Ocala wrote, “I hope they won’t be needing those services anytime soon because those employees (meaning MCSO and MCFR) are going to flee in a mass exodus! I agree with a previous post, how about the commissioners taking a pay cut and work for what they pay the people who put their lives on the line every day. It’s not that taxing to sit in a padded chair in an air-conditioned office. Commissioners! How about talking TO the people you supposedly represent? Get some much needed perspective!”

Jerry Bevan of Ocala wrote, ” It’s amazing how some commissioners did not want the public to vote on the sales tax option this election cycle when it was the consensus of all municipal leaders in January. Now they want to keep the budget flat yet again. Maybe instead of kicking the can down the road again they should have used the $20 million they paid for a landfill deal, which won’t be used for almost a decade, on other projects here. Maybe instead of a ‘Blue Ribbon Task Force’ to go through everyone’s budget, we should have one for the backroom deals of some commissioners. Also the question should be asked, what happens if that landfill goes belly up before we use it? How do Marion County residents get OUR money back?”

Commissioner Stan McClain, who has been pushing for the sale of the jail, also opposes more funding for public safety. He has been the driving force behind the sale of the jail to Corrections Corporation of America (CCA). And although the deal is “off the table” for the time being, Kathy Bryant stated in an earlier interview that she would reconsider the proposition if CCA were to make a more reasonable counteroffer.

According to information received by Ocala Post, McClain has political and possibly family ties to CCA and stands to largely benefit from the sale. According to unnamed sources, if the sale of the jail was approved, McClain would earn a seat with CCA’s board of directors.

Ocala Post reached out to McClain; however, he chose not to respond to the allegations.

Ocala Post has also asked how the commission can sell an entity that is funded by taxpayer dollars.

While public safety continues to suffer, commissioners and councilman alike make sure the land deals go through, which creates an even larger public safety issue by inviting more urban sprawl to Ocala.

No raises or budget increases for public safety, yet the average pay for a garbage man is nearly $31,000 a year.