The threat has been extended to include the City of Ocala Council members as well. Be careful though; if the City Council doesn’t like what a resident has to say during a meeting, they will have you escorted out of the building by the police. This was recently demonstrated when Albert Dunlap expressed his concerns over the 400-acre land development deal that was recently vetoed by Mayor Kent Guinn.

Dunlap praised Mayor Guinn for showing leadership by vetoing the proposed land change. Dunlap said the city is just trying to make a “quick buck,” and most all residents agreed. Dunlap was escorted out by police at the request of Council President John McLeod after Dunlap threatened to introduce the City Council to his (Dunlap’s) attorneys.

The City Council has proposed a land development deal very similar to the land deal proposed by the Marion County Board of County Commissioners. Oddly enough, the land the city is trying to allow to be developed was annexed into the city by the county.

The City Council is proposing an ordinance that would allow the development of 400-acres of farmland that will, if approved, become a mixture of residential and commercial development. The land is located on 27th Avenue, near Trinity Catholic High School and Glen Hill Farm. Red Oak Farm and Ocala Stud Farm are the properties in line to be developed. The plans will allow for up-to 18 residential units per acre with a .75 ratio of commercial.

The President of Trinity Catholic High School, surrounding business owners, and residents are greatly opposed to the changes.

The plans were originally approved by a 3-2 vote, with councilmen James Hilty and Brent Malever being the two that voted against the plans.

Mayor Guinn, in a move that stunned residents but was greatly accepted, vetoed the plans the very next day. Guinn said, “The land use is not compatible for the surroundings of the area.”

Not willing to accept the fact that residents do not want the land developed, the City Council is now trying to have Mayor Guinn’s veto overturned.

Residents said it’s just one more reason to realize that the county and city public meetings mean absolutely nothing to board members.

Recently, the BCC voted 4-0 to support similar land changes known as the Sunny Oaks Estates project, and 3-1 for the Equine Commerce Support District development project; projects that will destroy approximately 400 acres of Marion County farmland. The project will be a combination of residential, commercial and industrial development. The plans originally only called for a little over 100 acres, however the county slowly increased the acreage and were very sneaky about inserting the changes into the plans without presenting the changes to the public. The residential portion of the project allows for 10 units per acre to be built. The land for the project is located on CR 475 near I-75.

It should be known that both projects combined involve an estimated 800 acres of land, and the projects are less than 20 miles apart. 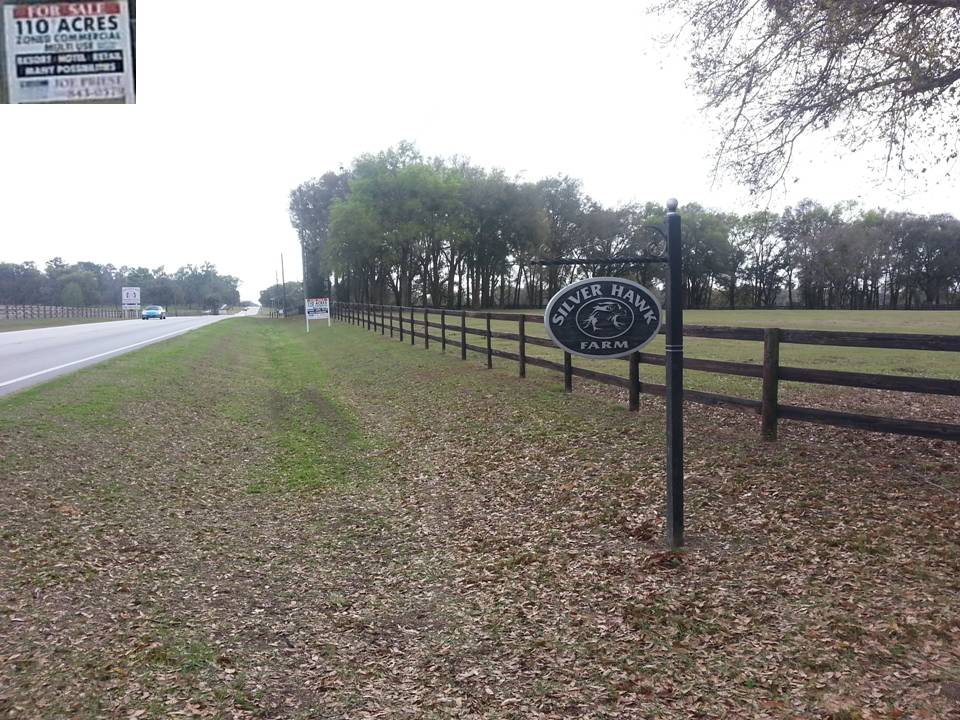 And as with the county, it is to no surprise that City Council members also received many campaign contributions from real estate developers, contractors, engineers and construction companies including Scott Siemens, a developer whom also contributed to county commissioners. Two of the City Council members are also directly involved in the finance industry.

Accepting campaign contributions of these types is something residents have expressed time and time again to be a conflict of interest.

Residents are concerned that development on such a large scale will certainly bring crime and traffic.

Carlene Arroues wrote, “Does development only bring crime and traffic or can it also bring jobs? Our community cannot survive on wide open spaces and minimum wage jobs. That brings more crime as well because people can’t survive. I feel it needs to be developed smart, to bring better paying jobs. Nothing stays that same, that is an unrealistic expectation.” [It should be known that Carlene Arroues made her statement before she realized the intensity of the development]

Residents are looking at 10 houses per acre on the county project and up to 18 per acre on the other. With the projects being close to the interstate, in an area that will be partially industrial developed residents are smart enough to figure out what kinds of neighborhoods will be built. Orlando started out the same way and look at the city now.

Marion County does not have the resources nor does the sheriff’s department have the man power to keep up with the crime that the developments could possibly bring. Marion County has a high number of vacant businesses that are just sitting and falling apart, development is not going to correct that issue. The only resolution for the vacant dilapidated businesses is for an investor to buy and renovate already standing structures, not build more in a new area with the hope that they will thrive.

Many residents of Marion County have hit hard times due to the lack of employment, but not all of them have become criminals in the process. Marion County statistics show it is far more rare to find an individual that stole bread to feed a family than it is to find an addict that lost a job and steals to support a habit. Therefore the theory of honest residents committing crimes because of the lack of employment or that developing 800 acres will solve the unemployment rate and keep residents from committing crimes, holds no merit.

Crime is just one issue, with development of this magnitude comes other problems that must be factored in.

For instance, county and city officials need to consider water supply, traffic flow and what kind of impact the development will have on the ecosystem. Not to mention, how will the already crowded Marion County Schools accommodate families with children?

According to analysts, building a new neighborhood and including commercial plans does not necessarily mean there will be a vast supply of jobs. If the area includes hotel development and or gas stations and the business is solely owned by a foreign entity, majority of the owners will only hire within their foreign group. Therefore the supply of jobs expected by Marion County residents will not be available. With a vast majority of investors being from India, analysts say that it is a high probability that foreigners would be drawn to the area. Money brought in by foreign groups (unless they pay taxes) is not usually reinvested into the county, but rather within their own home towns.

The parties that stand to make the largest profit from the developments are the individuals that are directly involved in the development or have some sort of interest in the project.

It should also be known to Marion County residents, that all seven members of the planning board have ties to the construction industry, many are even involved in projects that come before them for review.

Sarah Carter wrote, “Leave it as farmland, there are enough empty buildings.”

Sarah is correct, on SW 19th Avenue Road, prior to turning left onto 27th Avenue there are numerous businesses that are vacant, and have been vacant for some time. In the industrial district there are also multiple fairly large buildings that have been vacant for years. The property is there, including vacant hotels; so why aren’t the properties being utilized? It’s because the city, the county nor the developers involved in the current projects stand to profit from those building being renovated and reopened.

Craig Bernick, the owner of Glen Hill Farm, was pleased by Mayor Guinn’s veto. Bernick is 100% opposed to the land being developed. Bernick, along with Mayor Guinn and local doctors agree that there are enough vacant buildings as well as multiple acreage sites for sale that are more suitable for the projects at hand.

Residents feel city and county meetings are a waste of time and they are fed up. Having attended many meetings, Ocala Post has witnessed a packed room with all residents opposing the city or county, just to have the issue passed by the City Council or BCC. Almost as if the elected members already had their minds made up before attending a public meeting.

Residents want change, and not “Obama Change,” they want to be heard and want the system overhauled. Decisions should be based on the popular vote as a community in its entirety, not by the vote of a few whom stand to profit from the decisions being made.

There is clearly corruption in Marion County. Corruption that we the citizens are sick and tired of dealing with, said a Marion County resident in an e-mail to Ocala Post. The resident, whom wishes to remain unnamed, also told Ocala Post that she spoke with the governor’s office about the Marion County and City of Ocala elected officials. She said after speaking with Governor Rick Scott’s office she was directed to the Florida Department of Law Enforcement’s (FDLE) Jacksonville office which is the agency that handles corrupt politicians in the Marion County area.

Ocala Post verified the information with Deputy Press Director John Tupps with Governor Rick Scott’s office. And while the FDLE would not confirm nor deny if an investigation is being conducted, Ocala Post was told that the FDLE takes these types of reports very serious.

Remember, to say nothing then complain makes a person part of the problem, not part of the solution.

Ocala Post reached out to the City Council multiple times via e-mail as well as the City Clerk with no response.

Marion County Board Of County Commissioners Corruption/Conflict Of Interest