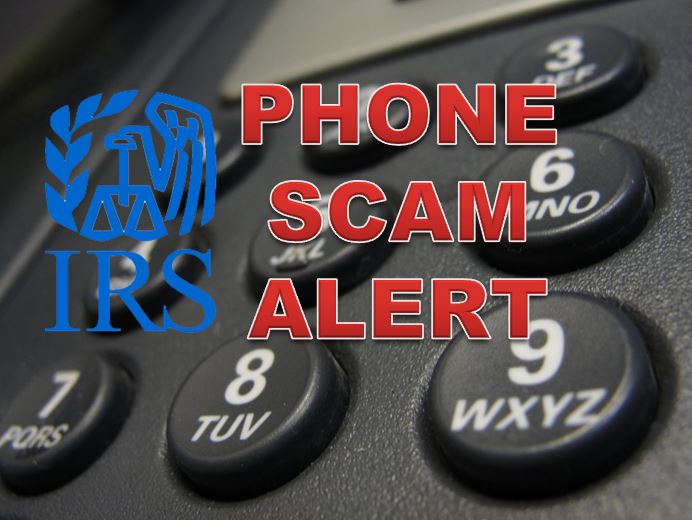 Ocala, Florida — An IRS phone scam taking place across the country has surfaced in Marion County.

On July 25, a Marion County resident, who had been fortunate enough not to fall victim to the scam, contacted Ocala Post.

According to the IRS, the calls have become more sophisticated, which often times leads a person to become a victim.

The IRS said that some victims have been told they owe money to the IRS and it must be paid promptly through a pre-loaded debit card or wire transfer. If the victim refuses to cooperate, they are then threatened with arrest, deportation or suspension of a business or driver’s license. In many cases, the caller becomes hostile and insulting.

Barr said that it was a pre-recorded, robotic female voice.

The automated call stated, “We are glad we are finally able to reach you. This is the Internal Revenue Service, and we are suing you for fines you have failed to pay. Please call this number…”

Barr said she found it funny when the pre-recorded voice stated that, “They were glad to have finally reached her.” She said it was funny because no one had ever called before that day.

“We were smart enough not to fall for it,” Barr said. “I know there are a lot of gullible and trusting people out there and, since this was a pre-recorded robotic voice and not an actual person, I wanted to bring it to everyone’s attention.”

Barr said, “I hope this information helps others not to fall for this scam.”

Even though IRS scams are not new, this particular phone scam, which has become more sophisticated, was originally reported in 2013. It was later updated in November 2014.

A statement in a document published by the IRS reads:

“This scam has hit taxpayers in nearly every state in the country.  We want to educate taxpayers so they can help protect themselves.  Rest assured, we do not and will not ask for credit card numbers over the phone, nor request a pre-paid debit card or wire transfer,” says IRS Acting Commissioner Danny Werfel. “If someone unexpectedly calls claiming to be from the IRS and threatens police arrest, deportation or license revocation if you don’t pay immediately, that is a sign that it really isn’t the IRS calling.” Werfel noted that the first IRS contact with taxpayers on a tax issue is likely to occur via mail.

Other characteristics of this scam include:

If you get a phone call from someone claiming to be from the IRS, this is what you should do:

Taxpayers should be aware that there are other unrelated scams (such as a lottery sweepstakes) and solicitations (such as debt relief) that fraudulently claim to be from the IRS.

The IRS encourages taxpayers to be vigilant against phone and email scams that use the IRS as a lure. The IRS does not initiate contact with taxpayers by email to request personal or financial information.  This includes any type of electronic communication, such as text messages and social media channels. The IRS also does not ask for PINs, passwords or similar confidential access information for credit card, bank or other financial accounts. Recipients should not open any attachments or click on any links contained in the message. Instead, forward the e-mail to phishing@irs.gov.

Several citizens in Marion County have reported being targeted by these types of scams.

More information on how to report phishing scams involving the IRS is available on the genuine IRS website, IRS.gov.