Stay tuned to this article for future updates and videos.

Hurricane Matthew is now a category 3, sustained winds of 120 m.p.h.

The National Weather service said, “Because the hurricane is over open water, the storm has the potential to regain strength.”

Tropical storm warnings remain in effect for Marion County. Winds will possibly reach 40 to 50 mph, with gusts of 70 mph.

Marion County residents are urged to stay off the roads if they can.

Customers without power in Marion County

Electric crews will continue to do repairs as quickly as they can. However, once sustained winds reach 30 mph, crews will cease work.

Statewide, there are more than 600,000 people without power.

The NOAA said, “Due to expected flooding, heavy rain, and high winds with the possibility of tornadoes, the current threat to life and property is elevated.”

The slow-moving nature of the hurricane will translate to days rather than hours of pounding surf, high winds and heavy rain.

Hurricane Matthew will “slam” parts of eastern Florida starting Thursday, and then spread up the coast of Georgia and the Carolinas Friday into the weekend.

The College of Central Florida wrote, “Starting at 5 p.m. Thursday, ALL College of Central Florida Classes will be canceled and campuses closed. Campuses will remain closed until Monday. The closing is for the Ocala Campus , Citrus Campus, Hampton Center, Levy Center, Levy Campus, Appleton Museum of Art, as well as online classes. CF classes and business operations are set to resume Monday, Oct. 10.”

All Brevard County bridges remain open at this time.

As the storm moves closer to the coast, conditions will become more favorable for tornadoes.

Hurricane Matthew, which made its first landfall Tuesday morning, is undoubtedly a powerful storm.

The storm is approximately 400 miles wide.

More than 1.5 million people have been evacuated from the U.S coastline.

Seas and surf along the coast of the southeastern United States will build and become dangerous.

All residents — coastal and inland — should be prepared for strong winds, heavy rain, and flooding.

Governor Rick Scott issued a State of Emergency for Florida, and has urged all residence to be prepared, just in case.

There have been many complaints of foreign-owned stores engaging in price gouging. Not just with gas, but also propane tank exchanges, ice, and water. If you feel a store is taking advantage of citizens, call 1-866-8-NO-SCAM. Be sure to shoot a few pictures or record video if possible. Be sure to keep all receipts.

The Marion County Sheriff’s Office Multi-purpose Room will be open as a shelter for the general population only. (This is not a special need or pet friendly shelter) The shelter will open at noon on Thursday, October 6.

For special needs residents with a pet, transportation will be provided Marion County Animal Services.

The Southeastern Livestock Pavilion, located at 2232 NE Jacksonville Road, Ocala, will be open to shelter livestock. All livestock will be accepted during regular business hours (8:00 a.m.- 5:00 p.m.).

The livestock owners must provide food, water buckets, and care for their livestock.

The cost of this sheltering is $10 a day for a concrete stall. 188 stalls are available and it will be first come, first serve only. Please contact the Southeastern Livestock Pavilion at 352-671-8600 for more information.

If you have questions about the storm or shelter information, residents can speak to an Emergency Management representative by calling 352-369-7500.

According to the NOAA, sustained winds make it more dangerous to stay in a mobile home. Currently, Marion County is under a voluntary evacuation. The NOAA says Marion County could have 40-50 mph winds (sustained) with 70 mph gusts. Storms are every unpredictable. If you feel that you may not be safe in a mobile home, you may want to make other arrangements. It is never a good idea to wait until the last minute, as roads may be blocked.

In preparation for Hurricane Matthew, the City of Ocala will open sandbag stations on Wednesday, Oct. 5 and Thursday, Oct. 6 from 8 a.m. to 6 p.m.

Sand bags are provided to City of Ocala residents at no charge. Limit is 10 per household.

These locations are mostly self-serve, but if you need any assistance, please see the front desk staff member at the District Offices during business hours (8:00 a.m. to 5:00 p.m. daily).

There is no sand bag limit at these locations.

According to the National Weather Service, a hurricane watch was issued Tuesday afternoon for Florida’s southeast coastline, many of which have been upgraded to warnings.

The order is for all marinas, Jetty Park campers, all Port businesses, and tenants. Everyone must be out by Wednesday at noon.

According to the U.S. Coast Guard, Canaveral harbor remains closed.

The closure means no vessel traffic of any kind will be allowed in the harbor until after the storm has passed and the order has been lifted.

Cruise, freight and, charter airline interests should be prepared to change itineraries until the storm has passed. Commercial airline delays and cancellations are likely as the storm approaches. Some airports will close.

In 2015, Governor Rick Scott signed a bill allowing citizens to carry a concealed weapon without a permit during a state of emergency. SB 290 created an exception to the conceal carry law and allowed a person to carry a firearm concealed without a permit while evacuating pursuant to a mandatory evacuation order during a state of emergency declared by the Governor under Chapter 252 or an emergency declared by a local official under Chapter 870 .

HB did not change any provisions related to the current concealed carry weapons permit law, but added the ability for persons without concealed weapons permits to carry concealed during mandatory evacuation orders under declared emergencies.

The bill only applies to law abiding citizens, not felons. 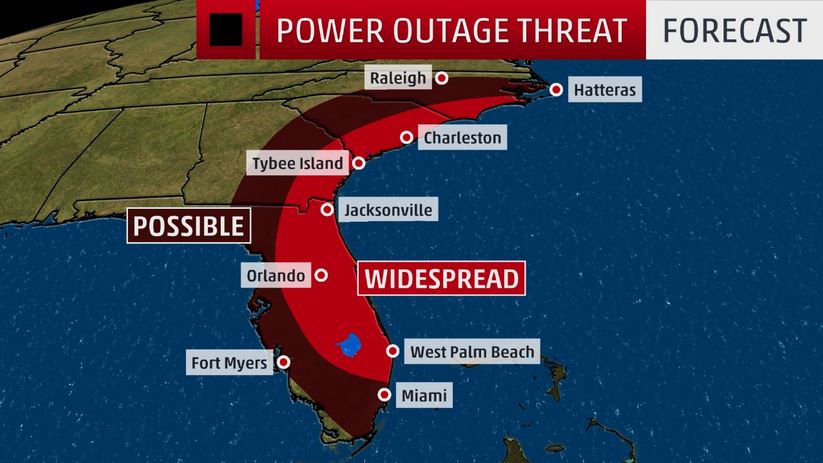