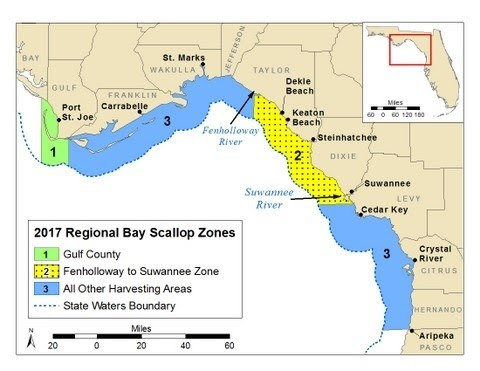 According to a press release, the season postponement will continue until scallop samples test safe for human consumption.

The bay scallop season postponement includes all state waters from the Mexico Beach Canal in Bay County through the westernmost point of St. Vincent Island in Franklin County.

This algae bloom should not impact other recreational activities on St. Joseph Bay.

Florida Department of Agriculture and Consumer Services had also issued a closure for the harvest of all clams (including pen shells), mussels and oysters in St. Joseph Bay.

Pseudo-nitzschia is a naturally occurring microscopic alga that in some cases can produce domoic acid, which can negatively impact marine mammals and seabirds and can cause amnesic shellfish poisoning in humans if contaminated shellfish, including mussels, oysters, clams, and scallops, are consumed. ASP can cause both gastrointestinal issues, such as nausea and upset stomach, as well as neurological issues such as short-term memory loss. Domoic acid has been confirmed in seawater and scallop samples from St. Joseph Bay. Domoic acid does not impact finfish directly, but fish should be rinsed well, filleted and skinned prior to being eaten.

The best way to protect yourself is to heed FWC closure warnings and not consume shellfish from the closed areas.