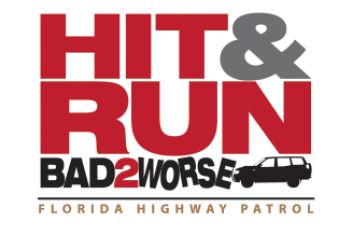 Tallahassee, Florida – Florida has experienced an alarming increase in the number of fatal hit and run crashes during the last two years. The Department of Highway Safety and Motor Vehicles is partnering with the Florida Sheriffs Association (FSA), the Florida Police Chiefs Association (FPCA), the Florida Department of Transportation (FDOT) and Students Against Destructive Decisions (SADD) to get the message out that fleeing the scene of an accident can result in tougher penalties.

Last year, the Aaron Cohen Life Protection Act was signed into law by Governor Scott. The law enhances the penalties for leaving the scene of a crash. The campaign aims to reduce the number of hit and run crashes in Florida by educating drivers about their responsibilities if involved in a crash and the consequences they face if they leave a crash scene.

“There were more than 80,000 hit and run crashes in Florida last year, a seven percent increase from 2013. Leaving the scene makes the situation worse, not only for those who flee, but even more so for the victims left behind,” said DHSMV Executive Director Terry L. Rhodes. “It is crucial that all individuals involved in a crash, including witnesses to a crash, contact 911 and remain at the scene until help arrives. Every life matters and every second counts.”

What does Florida law say?

There are many reasons a person would leave the scene of a crash. Some of the most common reason are the driver is impaired, does not have insurance, a drivers license, driving a stolen vehicle, is a non U.S. citizen, or has an active warrant. However, there are times when a driver leaves the scene out of panic and fear.