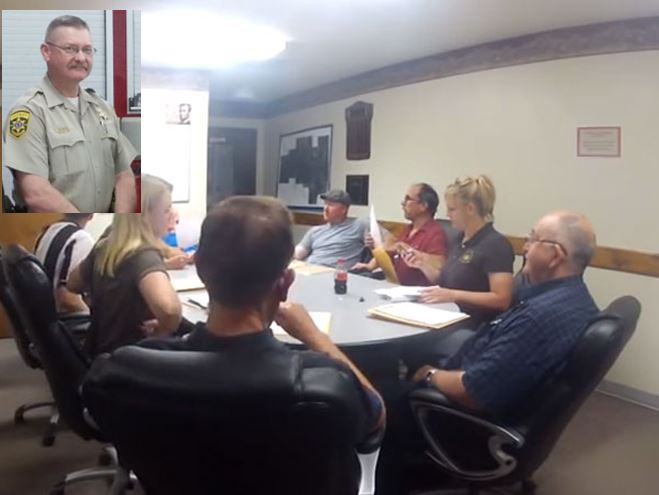 Illinois’ number one manufactured product is corruption. More than 95 percent of the Illinois legislature is safe in gerrymandered districts. The incumbent governor has three current federal investigations of his administration, but the Attorney General/state’s attorney class can’t find public vice anywhere.

Residents that voted in the recent election said they are hoping officials have learned from the past mistakes of others.

So what can a law-abiding citizen do? The answer is coming from some regular guys in southern Illinois who decided to hold public officials accountable. They call themselves the “Watchdogs.”

Kirk Allen and John Kraft — two military veterans — live in Edgar County, which just might be the most corrupt county in the country. For a couple of watchdogs, it’s a target-rich environment.

In an effort to take back their government from self-serving politicians and bureaucrats, Kraft and Allen established a group called the Edgar County Watchdogs. Through a combination of public pressure, Freedom of Information filings, lawsuits, and media exposure, they have created a system that deeply threatens Illinois’ corrupt, entrenched political establishment. They operate a blog called Illinois Leaks that exposes corruption at the state and local levels. The blog is so popular that it is trusted more than the local paper.

Considering the fact that, according to Forbes, their home county’s government has racked up over $79 million in debt all on its own while serving only 18,000 residents, Kraft and Allen have their work cut out for them.

By relentlessly pursuing justice for even the smallest infractions by bureaucrats and politicians, the Edgar County Watchdogs have driven 102 public officials to resign from their posts, including 33 officials in Edgar County alone. The pair busted the mayor of Redmond for attempting to hold office while living out of town. They represented themselves in court and beat Illinois Assistant Attorney General Emma Steimel in a lawsuit seeking access to state e-mails.

Officials who have resigned due to the Watchdogs’ efforts include a property tax assessor, the Edgar County board chairman, an entire airport board and its manager, the attorney for Kansas Township’s fire department, Shiloh’s superintendent of schools, and Effingham’s health department administrator, among others. After they exposed corrupt, illegal, and self-serving spending habits by the Ford-Iroquois County health department, the entire bureaucracy was dissolved. In some cases, federal agents have even stepped in to investigate and issue subpoenas to local officials after receiving tips from Kraft and Allen.

Public boards are used to facing angry crowds, but most have never encountered what happened at one recent meeting in central Illinois.

In what was one of their most epic displays of political crime-fighting, which was captured on video, Allen and Kraft held the entire Clark County Park District Board under citizen’s arrest on May 13, 2014, for violating the Illinois Open Meetings Act, a Class C misdemeanor.

When asked if there would be public comment, one of the board members said, “I vote no,” followed by five other board members.

Board attorney Kate Yargus could be heard on video saying there would be no public comment that night and telling the board members they were “free to go,” even after Kraft’s citizen’s arrest announcement. She tried to cite statute to Kraft, but before she could finish, he said, “Just sit down, you are making yourself look like a fool.”

Deputies were dispatched to the scene, but Clark County Sheriff Jerry Parsley personally responded that night. Parsley said he knew it was a heated situation and felt it would be best if he handled it. He said that Kraft handled the citizen’s arrest responsibly, and the board was definitely in violation of the Open Meetings Act by not allowing the public to speak.

“It’s not that they should have. They’re mandated to,” Parsley said. “The people need to have their voice. It’s not a dictatorship. It’s a democracy.”

The sheriff arrested six of the board members. The seventh board member was not arrested because he voted against the other members. As they were escorted out of the building, the crowd cheered.

The board had previously laughed at the watchdog group and called them troublemakers, However, the Sheriff and the State Attorney’s Office didn’t see it that way.

Kraft said, “Every citizen, in every state, county, and city, should take note. Make sure their local government officials are working for the people and not for themselves.”

A lawsuit against the board is still pending. Their next board meeting is scheduled for late November.

–Barry Donegan, Adam Andrzejewski, and the Better Government Association contributed to this story.–