Deputies responded to the Lake of the Woods Subdivision in Fern Park Saturday, September 6, 2014, to a report of several vehicles being burglarized. The victims provided deputies with information about an unknown male and female seen in the neighborhood earlier that morning acting suspiciously.

Deputies were unable to locate the pair at that time. Later that day, a victim called the Sheriff’s Office to report that she saw the suspects again in the neighborhood. Deputies responded and quickly located the pair. The female, Melissa Schneider, 27, of Orlando, was immediately taken into custody. The male, later identified as Jonathan Kokontis, 25, of Winter Springs fled on foot. He was apprehended moments later after deputies found him hiding in a shed.

While secured in the deputy’s patrol vehicle, Schneider tried helping Kokontis remove his handcuffs several times. Kokontis was able to navigate his handcuffed hands from the back to the front. Schneider was then able to remove one of her earrings, which Kokontis used in a failed attempt to pick the lock on his handcuffs. The deputy noticed the commotion in the patrol car and removed Kokontis from the vehicle to properly reposition his handcuffs.

Kokontis then struck the deputy and began running. Kokontis burst through a nearby fence, then entered a neighboring house and demanded the homeowner’s car keys. The homeowner complied and when he attempted to start the vehicle, the suspect discovered that it was not operational. The suspect then fled to another unoccupied residence where he armed himself with a pickaxe and refused to come out. An SCSO canine apprehended him without further incident.

Jonathan Kokontis was charged with Escape from Custody, Robbery–Home Invasion, Armed Burglary of an Unoccupied Dwelling, Burglary of an Occupied Dwelling, Resisting an Officer without Violence, Battery on a Law Enforcement Officer, Attempted Grand Theft of a Vehicle, Vehicle Burglary, Criminal Mischief, Petit Theft, and Violation of Probation.

Melissa Schneider was arrested after investigators reviewed in-car camera footage and learned of her role in attempting to aid Kokontis in his escape from custody. She was located and arrested the following day. Schneider was booked on charges of Possession of Marijuana, Possession of Drug Paraphernalia, and Aiding a Felon.

During the course of the investigation, it was also discovered that the pair battered a pregnant woman the evening before committing the vehicle burglaries. Both were additionally charged with Aggravated Battery.

Kokontis is currently in custody at the John E. Polk Correctional Facility on a $56,000 bond. Schneider remains in custody on a $29,000 bond.

The investigation remains ongoing as investigators look into the possibility of the couple being involved in other burglaries in Seminole County. 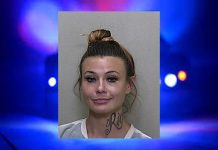