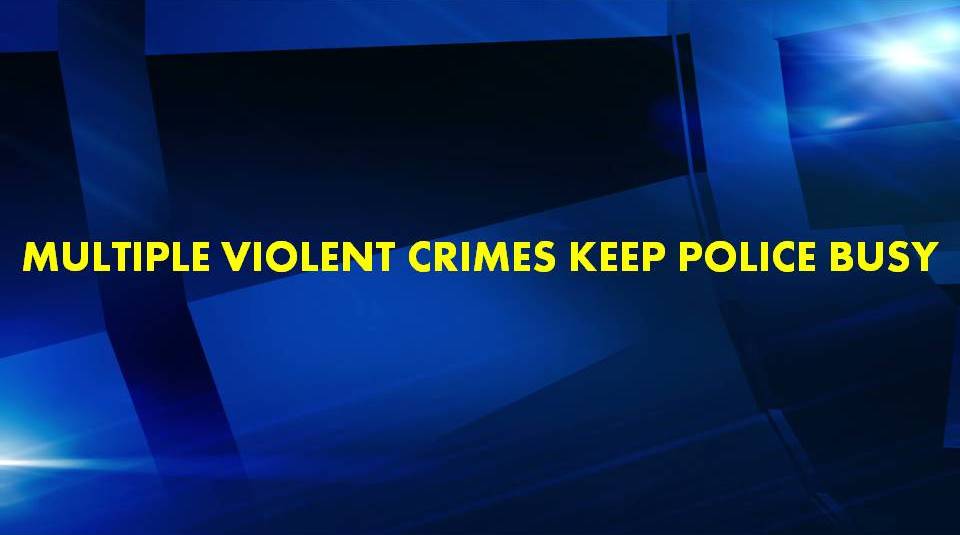 Ocala, Florida — An armed robbery was the beginning of a busy night for law enforcement and it happened just moments before multiple shootings occurred in Ocala.

On today’s date, September 12, 2014, at approximately 1:14 a.m., Ocala Police Officer Jason Rodriguez, was the first to respond to the RaceTrac located at 4820 SW College Road in reference to a robbery.

The manager told Officer Rodriguez that [he] had been outside the store with two of his employees, and when he re-entered the store there was a black male wearing a black hoodie and a “ninja” mask pointing a black handgun at him. The subject told the clerk “I don’t want to hurt you” then demanded all the money out of the register, which was placed into a small blue book bag. The subject then fled out the door on foot. There were no injuries as a result of this incident.

The suspect is further described as being in his 20s, approximately 5’9” in height with a thin build. In addition to the black hoodie and mask, he was wearing black shorts with a white stripe down the sides, white socks and shoes, and a black glove on his right hand.

Assistance to search for the suspect was given by OPD K-9 Officer Rodriguez, MCSO K-9 Deputy Sullivan, and the MCSO Air Unit. The suspect was not located.

Video was obtained and is being released in the hopes of assistance from the community in identifying the suspect.

Leading up to today’s shooting

On the night of Wednesday, September 10 at 7:28 p.m., Police Officer Lisa Rose responded to a reported shooting in the 2400 block of NW Third St.

When Officer Rose arrived at the scene, she interviewed Timmy Curry, who lives in the 2400 block NW Third St.

Curry stated he was inside his home when he heard what sounded like a gunshot. Curry then looked out of the window and saw a dark-gray four-door vehicle exiting the yard of the NW Third Street. residence.

Curry said he saw a male vacate the rear of the vehicle and fire a shot toward the west. The male then got back into the vehicle and left the area, traveling east on NW Third St.

Sims said she was inside her home when she heard three or four gunshots.

Officer Rose then went to ORMC to interview the victim, Adonnis Boyd, 23.

Boyd sustained a gunshot wound to the lower back portion of his head.

According to Officer Rose, when she attempted to interview Boyd, he said, “I don’t want to talk, I don’t know nothing. I just want to see my family. I ain’t pressing charges, I ain’t coming to court. All I know is I am an innocent bystander!”

Boyd reported he drove a couple blocks north of the 1900 block of W Silver Springs Blvd. when he saw two affiliations were arguing and then heard two gunshots.

Boyd kept driving until he reached the 1600 block when he excited the vehicle, which belonged to a friend.

Boyd then said a pedestrian told him he had blood coming from his head and that he needed to go to the hospital. Boyd said he did not feel anything.

Boyd then went to Parkside Garden Apartments, where two females drove him to ORMC.

Boyd later signed himself out of the hospital against medical advice.

On the same night of September 10, Officers Emmanuel Ramjit and Jason Rodriguez responded to a reported shooting in the 1900 block of NW 26th Ave.

Concerned the shooter may still be in the area, Officer Rodriguez cleared the scene as Ramjit began interviewing resident, Sharondra Jones, who stated she had just returned home from getting Chinese food, when she heard multiple gunshots.

Jones’ son, Tyrone Foster, 20, was outside when he heard the gunshots. Foster reported he saw a newer model dark grey/silver colored Chevy Camaro turning onto NW 19 Ave from NW 20 St. As Foster stood near their Dodge Magnum, which was parked in their driveway, the Camaro returned onto NW 19 Ave from NW 20 St. Foster said the front seat passenger began to fire shots. Foster said as he ran to the front door of the house, he slipped, and fell on the ground injuring his elbow.

Officer Ramjit saw a broken window with a bullet hole. Other officers reported spent shell casings in the road in front of the house.

According to Officer Ramjit, he then heard two males yelling for help near a retention pond located north of the 2500 block of NW 20 St. Officer Ramjit saw a male, identified as Darrell Summers, 32, with blood on his hands and claiming he had been shot. The other male was identified as Summers’ son, Curdarrius Brown, 15.

Summers said he and his son were walking when the shooting began. Summers and Brown then ran through the residence on the west side of the pond and along the northern fence line of the retention pond. They then jumped the fence, entering the pond area, when Summers slipped and fell into the pond.

Officer Ramjit said he saw blood on the top of the fence.

Once officers arrived on scene, they interviewed Sharonda Jones, who said she was asleep in her residence when she woke up to gunshots coming from the front of the house. She reported no one inside the home was injured, but their Dodge Magnum was struck multiple times, as well as the exterior of the house.

While at the residence investigating the shooting, officers heard multiple gunshots coming from south of their location.

One of the officers reported he heard six to eight gunshots and left immediately to respond.

While responding, he was informed that a 911 call reported a shooting at 1100 block of NW Third Street.

One of the officers saw where the bullets entered the home from the east side of the building when it struck the children.

The mother, Jasmine Powell, said the two children were on a mattress in the living room watching television.

According to Powell, she and others were sleeping in another room. Powell said she heard two to three gunshots and dropped to the ground.

Adrian Anderson, one of the people in the other room, went to check on the children and saw both had been shot.

One officer found spent shell casing in a grassy area.

The children were transported to Shand’s Hospital in Gainesville for treatment. Both of the children are currently listed in stable condition.

Anyone with information about the robbery or the shootings, is asked to contact the Ocala Police Department at 352-369-7000 or tips may also be submitted through our mobile app, MyPD. Tips may also be submitted through Crime Stoppers of Marion County at 352-368-STOP(7867), at www.ocalacrimestoppers.com , or by texting keyword 368STOP to 274637. No detail is too small.