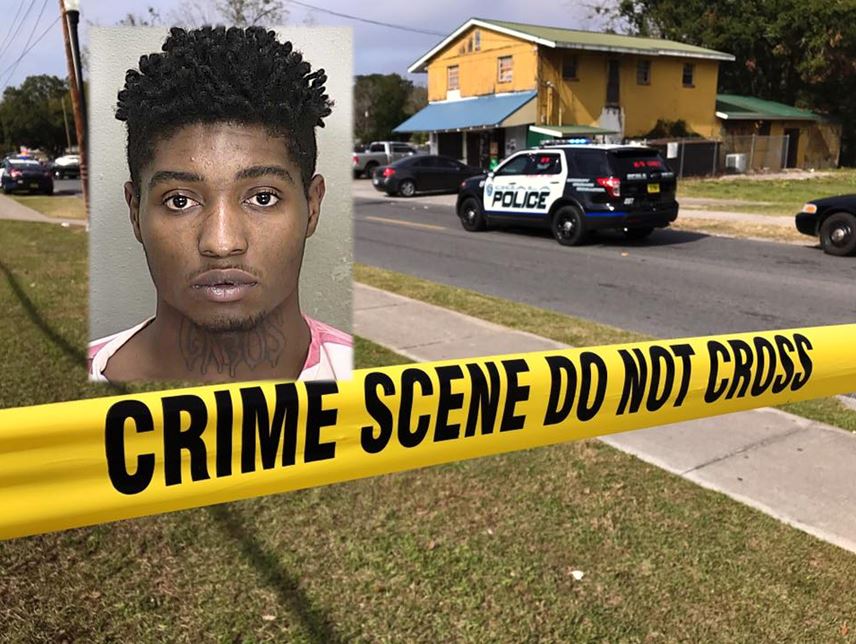 Two men were shot and injured, which included Dukes.

Witnesses stated that Dukes, who was dressed in all black and wearing a clown mask, approached the west side of the grocery store and started firing a handgun.

A man, later identified as Servando Ferguson was shot in his leg. He was transported to a hospital and treated for his injury.

According to witnesses, a customer from the carwash near Long’s Grocery pulled a gun and returned fire. Another customer gave chase while also firing at Dukes. Dukes was shot in his leg and left foot.

Detective Brown stopped Dukes after he observed him walking west on Northwest 4th Street at the intersection of Northwest 7th Avenue.  Dukes then entered a hole in the fence of Parkside Garden Apartments.

Detectives reported that Dukes was limping and that his clothing matched the description of the shooter as provided by witnesses.

Due to a bloody trail left by the suspect, detectives recovered a clown mask and a handgun from the area where Dukes was seen walking.

State records show that Dukes had previously been convicted of Possession of a Firearm by a Delinquent.

Following treatment for his injuries, Dukes was arrested and transported to the Marion County Jail and charged with Aggravated Battery with a Deadly Weapon and Possession of a Firearm by a Convicted Felon.

Detectives have not said if the customers would face any charges or if they were legally carrying a firearm.

At this time, Dukes has not provided a motive for his actions.