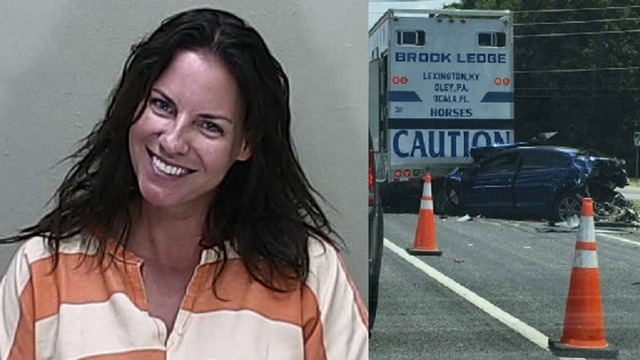 Marion County — The family of a 60-year-old Ocala woman who died following a May 10 car accident is outraged that the drunk driver was released on a $30,000 bond.

The crash occurred at the intersection of U.S. 27 and Northwest 60th Avenue.

The Florida Highway Patrol said they arrested Angenette Marie Welk, 44, A.K.A. Angenette Marie Missett, at the May 10 crash site and charged her with DUI with Serious Bodily Injury — she smiled ear-to-ear for her booking photo.

The family stated that they felt Welk showed disrespect by smiling.

On May 14, the woman who Welk hit, Sandra Clarkston, was removed from her ventilator while at Ocala Regional Medical Center. Surrounded by family, she passed away a short time later.

On May 19, FHP investigators upgraded Welk’s charges to DUI Manslaughter.

She was booked into the Marion County jail and released on bond approximately two hours later.

Welk was driving her 2011 Chevrolet Avalon eastbound on U.S. Highway 27 around 11:54 a.m. on May 10 when she failed to brake and slammed into the rear of a 2017 Hyundai, which was stopped in front of her, according to the arrest report. 18-year-old Shiyanne was the driver of the Hyundai. Clarkston was the passenger.

The force from the crash forced the Hyundai into the back of a horse trailer.

Welk told troopers that she rear-ended the vehicle because she had dropped her phone.

Welk has since hired the law firm Blanchard, Merriam, Adel & Kirkland to represent her.

Clarkston had just turned 60 the day before the accident.