Ocala PostOcala Newspaper - News without hiding the truth
More
Home News Florida Armed Carjacking In Sanford By Juveniles – Where are the parents? 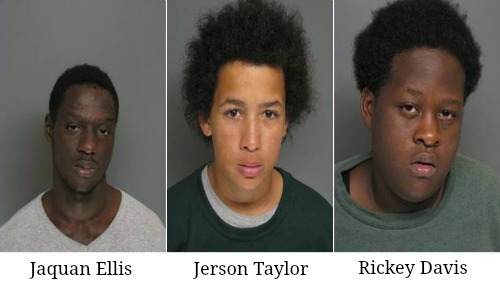 Sanford, Florida — The Sanford Police have arrested three juveniles in connection with an armed carjacking that occurred on Bradshaw Drive shortly before 11:00 p.m. on Saturday, November 30, 2013.

Rickey A. Davis, 15 , Jaquan T. Ellis,17, and Jerson M. Taylor, 12, were all three arrested and charge with multiple felonies.

According to reports, the Seminole County Sheriff’s Office and the Lake County Police Department searched for the suspects until the vehicle was located at approximately 3:00 a.m.

The juveniles were still in possession of the vehicle and led authorities on a small chase prior to being apprehended.

The gun used to commit the carjacking was recovered from the vehicle.

All three juveniles were arrested and charged with Robbery, Carjacking, Armed Burglary of a Conveyance, and Grand Theft.

In accordance with Florida law, the names and photos of juveniles can be released once a juvenile has been charged with a felony.