Detectives with the Eustis Police Department say they have arrested a man who was selling a 14-year-old runaway from Ocala.

According to reports, 31-year-old Steven Hodge befriended the girl then passed her around to other men to have sex in exchange for money.

Detectives said they have been investigating the case since February when Hodge let the girl go.

Upon her release, the girl told investigators that she had been raped several times by several different men.

The girl, who had run away from the Arnette House in Ocala, ended up at a Eustis Family Dollar where she ran into Hodge and a woman. Detectives say the befriended her, gained her trust, and then convinced her to go to their friend “Poppie’s” house.

Once there, she was led into a shed, which was furnished, and given drugs. Detectives said she was forced to take MDMA. “Poppie” then raped the girl. A short time later, she was raped by another man identified only as “Red”.

Both of the men paid Hodge before leaving.

Once the men were gone, Hodge and another man raped the girl.

Detectives said they are using DNA samples taken from the girl during a rape examination to help identify the rapists.

The girl positively identified Hodge in a lineup.

Hodge was arrested and charged with Lewd and Lascivious Conduct with a Minor and Violation of Probation for a previous drug charge. 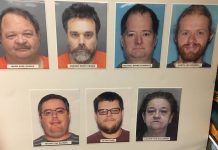 Alleged rapist could have other young victims