Ocala, Florida — One of Ocala’s dumbest criminals, who had smiled for a photo after the store clerk became suspicious of her transaction, has now been identified.

The woman in the photo was seen posing with a stolen Amex Express Macy’s credit card. The wallet she was holding was also stolen.

According to reports, the woman used the stolen card to purchase more than $400 in beauty supplies from Looking Good Beauty Supply, located at 1971 West Silver Springs Boulevard.

The clerk told police that he became suspicious after the suspect could not produce a state ID, but instead showed a picture of the victim she had stolen the credit cards from.

He said he asked if he could take a picture with the suspect holding the card and she happily obliged.

According to reports, Harris’ attorney contacted Ocala Police Department Detective Mark Proco and stated that he might be representing Harris. Detective Proco advised the attorney he needed a face-to-face or phone interview with Harris to discuss the incident.

A few days later, the attorney called back. He stated that Harris did not wish to be interviewed and that he was representing her.

The attorney would only state that Harris “found” the wallet in the parking lot of the Good Beauty Store.

Harris may have ties to Levy County.

If you know the whereabouts of Harris, you are asked to contact the Ocala Police Department by calling 352-369-7000; by contacting Crime Stoppers of Marion County at 352-368-STOP(7867), www.ocalacrimestoppers.com; or by texting tips to 274637 using keyword 368STOP. Anonymous tips can also be submitted through the OPD mobile app, MYPD, which can be downloaded on Apple and Android devices.

According to OPD, it was because of previous media releases that Harris was identified.

Ocala Police are asking for everyone’s help in sharing the photo on social media. 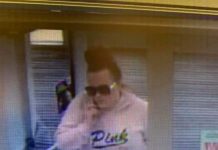