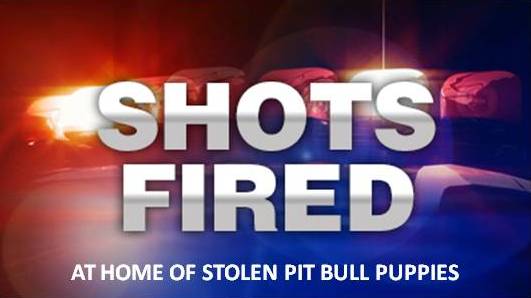 Ocala, Florida — At approximately 3 a.m. on Thursday, June 12, 2014, someone drove by the home where 17 pit bulls puppies were stolen on Monday, and fired several shots into the home.

Bullets zipped through the home, hitting Taegren Jones, 31, in the hand and Taegren Jones Jr., 3, in the forearm as they were sleeping. Both were taken to the hospital for their injuries.

On Monday, the woman that reported the theft of the pit bulls recalled seeing a burgundy in color late 90’s vehicle parked outside her home.

The pit bull puppies were stolen from a yard in the 7600 block of NW 49th Avenue.

The victim told deputies that she left her home around 8 p.m. to eat and at approximately 9:15 p.m. the victims boyfriend noticed the dogs were gone from their pens.

The suspect(s) crossed a privacy fence into the victims backyard and made off with the puppies.

The puppies are either being stolen solely for the resale value or possibly to be sold and then trained for dog fighting, authorities said.

The combined estimated value of the 29 stolen pit bull puppies is $15,000.

In all instances of the thefts, victims had left their homes for just a few short hours. This most likely means that the suspect(s) are casing potential targets.

Many times, if they are able to, the suspect(s) will take photos prior to stealing the dogs. If you see anything suspicious, report it right away. Also, take down the license plate number of any suspicious or unfamiliar vehicle(s) in your area.

If you are someone breeding pit bulls for resale, you should be very wary of potential buyers that come to your home after responding to advertisements. Sellers posting puppies for sale on Craigslist should use extra caution.

On May 21, 2014, five pit bull puppies were stolen from inside an Ocala home. The thief is suspected to be someone that had previously shown interest in the puppies.

Ocala Post is not releasing further details of the shooting at this time.

Anyone with information can call the Marion County Sheriff’s Office at 732-9111 or Crime Stoppers at 368-STOP, text a tip to 274637 using keyword 368-STOP, or visit www.ocalacrimestoppers.com.