Ocala, Florida — In May of 2014, Ocala Post told you about City of Ocala Councilwoman Mary Rich announcing that she wanted an ordinance put in place that would ban saggy pants in Ocala.

Rich said she – as well as other citizens in Marion County – do not like seeing young men and women walking around with their buttocks exposed.

“I have seen them do it in front of old people. I don’t consider myself old — maybe a little past middle age. They don’t have any respect for anybody when they do that,” Rich said. “It’s disgusting when you see them with their pants all down around their knees almost.”

Well, her wish is now a reality.

The Ocala City Council voted 4-0 on Tuesday to pass the ordinance.

The ordinance will prohibit anyone from wearing pants two inches below their natural waist in a way that exposes underwear or “crack.”

Ocala is not the first city in Florida to ban saggy pants. The city of Opa-Locka, Florida was actually first city to enact the ban in 2007. Officials in Opa-Locka said the ordinance has been working great.

Daytona Beach, Florida doesn’t have a ban – as of yet – on saggy pants. However, they were one of the first cities in Florida to ban “thongs” being worn in public.

City officials from, Opa-Locka, Lynwood, West Palm Beach and Cocoa Beach, Florida say they are fed up with the saggy pants culture. They say it’s disgraceful and it is teaching the much younger children that it’s OK to walk around with their underwear hanging out.

An official with the Black Mental Health Alliance out of Massachusetts said, “My children and I visited a theme park in Florida and we were disgusted. My children were subjected to a lot of indecency involving saggy pants. Some were young girls and others were young men, two of which were not wearing underwear….exposing their ‘cracks’.”

He said youth today should have more respect for themselves, especially girls. He went on to say, it is no secret that this type of culture is linked to drugs, gangs and other criminal activity. Our misguided youth call it “Profiling,” while I call it a statistical fact. And it is a gross misconception that the “Saggy Pants” culture is just a “black thing.” Additionally, he said, the “Penguin” walk also causes hip and other joint problems.

The fine for wearing saggy pants that show a person’s “crack” or underwear range from $25.00 to $500.00, depending on where you are, for first time offenders. Habitual offenders could actually be arrested and charged with indecent exposure.

In Wildwood, New Jersey saggy pants have been ban on the boardwalk. And the ordinance doesn’t just apply to saggy pants; it also applies to women that walk around it cut up jeans, skinny jeans that do not fit (revealing “crack”) or bathing suits that practically leave nothing to the imagination. While most men consider women that wear pants that show their “crack” sexy, residents say they are sick and tired of the young youth literally showing their a**es.

Sondra, a long time resident of New Jersey said, “They (officials) do make a good point. After all, not everyone on the beach or boardwalk will have a beautiful body type. How would you like to stare at muffin tops and plumber cracks while trying to enjoy your day off?”

New Jersey Mayor Ernest Troiano said, “Some visitors (who I imagine to be old and still upset about Elvis’ hip thrusts) have complained about looking at people’s rear ends ‘hanging out’ while walking the boardwalk.” 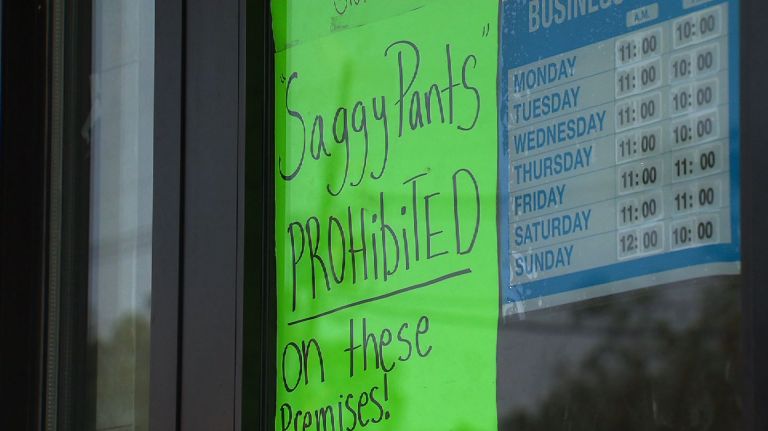 Multiple McDonalds locations in Texas have also ban saggy pants from being worn in their establishments. Most have posted signs in their windows.

They told Ocala Post that corporate does not have any comment, but said, “Owner-operated franchises can customize the experience for their customers as they deem necessary.”

The Houston health department said, “It’s a health issue. Why would you want to touch a counter or sit in a seat where someone else’s underwear or “crack” has been?”

One customer that was denied service at a Houston , Texas restaurant tried to sue the establishment, but lost. The Houston judge said indecent exposure is not a new law, and saggy pants that show a persons butt or underwear is not protected under Freedom of Speech or Freedom of Expression. It is simply disrespectful he said.

Many officials across multiple states do agree on one thing; criminals that wear saggy pants and try to run from a crime scene often trip and fall, getting themselves caught.

In Orlando, Florida, a robbery was foiled after Anthony Garcia, 31, tripped over his baggy pants as he was attempting to flee after snatching a cash drawer from a church gift shop. Orlando Police said it made their job a lot easier.

In Columbus, Ohio, an armed bank robber was caught after his saggy pants caused him trip and fall on the dye pack, setting it off. Security footage showed the robber dropping the money bag and fleeing the scene waddling like a penguin. He was later caught with his pants down, literally. Columbus Police said saggy pants are a criminals “kryptonite.”

Billboards are beginning to pop up in cities across the U.S in an attempt to promote the saggy pants ban.

However not everyone is in support of the ban. The NAACP says the ban targets the black community and hinders their development.

Eric Adams, a black senator from New York, said he is tired of the NAACP making everything about race. He said the ban is about instilling moral principles into our children, children of all races.

Adams said, “I am fed up with today’s youth walking around with “low slung” or saggy pants that exposes their underwear and often times their butt crack. It is offensive and represents a serious lack of respect from our youth today.” Adams said that today’s youth needs to realize that the trend of wearing saggy pants originated from inside prisons in the late ’80s early ’90s. Adding, “I hope one day there will be a nationwide ban on saggy pants.”

Earlier this year, Jamale Lamar Whitaker, 22, realizing he couldn’t shake Marion County Sheriff’s Deputy Crawford during a high speed chase, jumped out of [his] car and attempted to flee on foot. However, K-9 “Cadet” – anxiously waiting to get out of the car – was hot on Whitaker’s “tail.” Whitaker made the foot chase a little easier for K-9 “Cadet” because Whitaker’s pants were hanging of his rear, making it difficult for [him] to run. K-9 “Cadet” was able to secure Whitaker without incident. The incident was captured on dash cam video.

Some in Ocala are worried that the two inch rule will be difficult for officers to enforce.

Ocala City Attorney Patrick Gilligan said, “We are not looking to charge people, but if they don’t comply, I think the chief will tell police officers to take your phone out and take a picture.”

With the picture, a judge would be able to make a decision, he added.

Howard Gunn, a former Marion county Teacher, does care for the ordinance. He said he feels it will target black boys.

“The kids are going to say something to you because they don’t know the law,” Gunn said about the police. “And then, there you go. Escalation. Now you have an assault on a police officer.”

Rich said it is common sense and youth should not be wearing their pants sagging to the ground in the first place. She went on to say that the ordinance is not profiling.

It’s disrespectful, referring to saggy pants. “If you pull them up, you might be a better citizen because you may be able to find a job, J.O.B,” Rich said.

“Plumbers crack” is no exception to the rule.

Gilligan said that service professionals will receive a warning on the first offense just like everyone else if it becomes an issue.

Officials said that a reasonable person can tell the difference between a service professional doing their job and someone just walking around with their pants to their knees.

We want to hear from you. What do you think about the new ordinance? Comments are open below. Sign in with Facebook, or your preferred method.